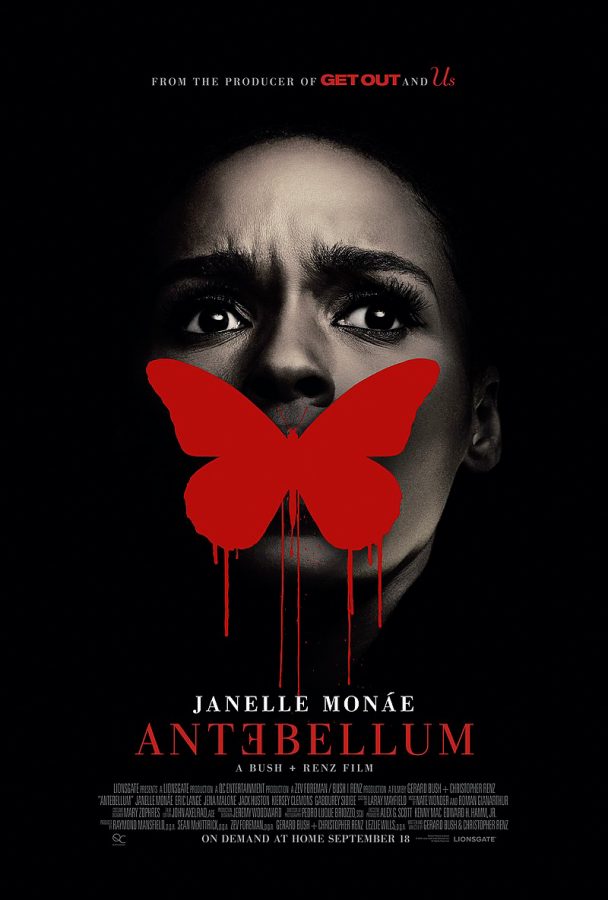 “Antebellum” has a scene early on in which a slave owner (Eric Lange), only referred to as “him,” beats Janelle Monáe’s character until she says that her name is “Eden.”

When I saw this, I immediately remembered a similar scene from the 2016 version of the miniseries “Roots,” a series about the legacy of one Black family through the generations from the 1760s through the Civil War.

“Antebellum,” released to video on demand Friday, is a thriller directed by Gerard Bush and Christopher Renz. Produced by the same production company as “Get Out” and “Us,” the film opens with Janelle Monáe playing Eden, a slave who is attempting to escape a plantation with two others, one of whom dies when the three are recaptured.

Like “Roots,” “Antebellum” wants to be about the past and the legacy of slavery, even going so far as to open on William Faulkner’s quote, “The past is never dead, it isn’t even the past.” Unfortunately, the film, while thought-provoking in some ways, doesn’t quite stick the landing.

The central conceit of the film is that Janelle Monáe’s character is actually Veronica Henley, a successful Black academic who finds herself in the role of the slave Eden on a Civil War-era plantation, and that’s an interesting conceit. In fact, it’s very similar to Octavia Butler’s book “Kindred.” But the execution of the film’s version of the concept leaves a lot to be desired.

The acting ranges from mixed to great. Monáe was decent in almost every scene of the film. My personal favorite performance was Kiersey Clemmons as Julia, a slave who has recently arrived on the plantation and goes to Monáe for guidance. But the film’s strong points lie in its visuals — the cinematography is beautiful, with several shots of sunsets that made me gasp. The score was very engaging, and the editing fluid and pleasing to look at.

I hesitate to call the film a metaphor for the way in which white supremacists seek to reclaim and control those they feel are inferior and have risen above their station, but only because I feel the word “metaphor” implies too much subtlety. The film is blunt, especially given we live in a world in which people have marched through Charlottesville chanting “blood and soil,” or in some cases actively want to incite a second Civil War.

In “Antebellum,” as in many movies about slavery, there is a large focus on the suffering of Black characters. An unnamed woman who was escaping with Monáe gets shot and we’re shown her body dragged by a horse. When her lover, Eli (Tongayi Chirisa), finds that the corpse has been burnt to a crisp, we see him completely break down and mourn the loss. We see Monáe receive a beating and be branded, both Clemmons and Monáe get beaten and, eventually, we see Clemmons’s hanging body.

I will give the film credit for subverting the “white savior” trope —  a white character who is instrumental in helping the Black characters — with the character of Daniel (Robert Aramayo). Daniel initially seems kind, and Julia attempts to play to his sympathy for help, but he immediately beats her in the next scene, declaring that he’s just as much a confederate as the rest of the men there.

The scene is painful to watch, but it’s one of the few moments of the film that has something to say — even those with doubts can and will be complicit in white supremacy in order to reap its benefits. Daniel turns down the chance to rape Julia, but tells her to let everyone think he did, and that isn’t much better.

Again, this scene relishes in Julia’s pain a bit too much for my tastes, but it’s also one of the only moments of the film in which the social commentary works. Otherwise the film is either too in-your-face, or it doesn’t follow through on its interesting concepts.

The description for the film said Monáe’s character is forced “to confront the past, present and future,” but that isn’t true. It’s not really her past that she’s confronting — it’s the past others have forced upon her. But the film doesn’t delve deeper into that fact or explore it, which is disappointing.

The film also has some serious problems with pacing. It begins in the midst of the story, with the middle third of the movie dedicated to how Monáe’s character ended up on the plantation. To be frank, that answer isn’t that complicated or interesting, but by the time the audience is caught up with Monáe’s present, the film is all action with her and Eli’s second escape attempt.

The concept of a “coping persona,” which the film describes as a persona that people take on to handle oppression, is brought up, but the audience doesn’t really see how Monáe’s character develops one, or if she even does, considering she’s working to subvert the plantation owners the entire time she’s there.

None of the characters have time to develop any depth, and the audience barely knows anything about anyone, protagonist or antagonist, aside from scenes establishing the skills Monáe uses in her escape attempt in the final act.

The film doesn’t even follow through on what happens to Monáe’s character after she escapes, ending with her riding away, again missing out on a chance to make some deeper social commentary by showcasing the fallout. The film is on the shorter end, only an hour and 45 minutes, so it’s not as though they couldn’t have added a few more scenes to flesh out some of these things.

Furthermore, for a thriller, there weren’t many moments that had me on the edge of my seat. The film spends a lot of time trying to build up suspense in that middle third — suspense that all ultimately falls flat because the audience already knows she ends up on the plantation.

Overall, I enjoy this film for its potential. The concepts it presents are interesting, but it would benefit from having more time to explore the characters and themes. There are good foundations, but the filmmakers don’t use that to its full potential.

As it exists now, “Antebellum” is an enjoyable thriller, but it isn’t “Get Out” or “Us,” no matter how much it wants to be.