Starship robots may return in future under new dining contractor 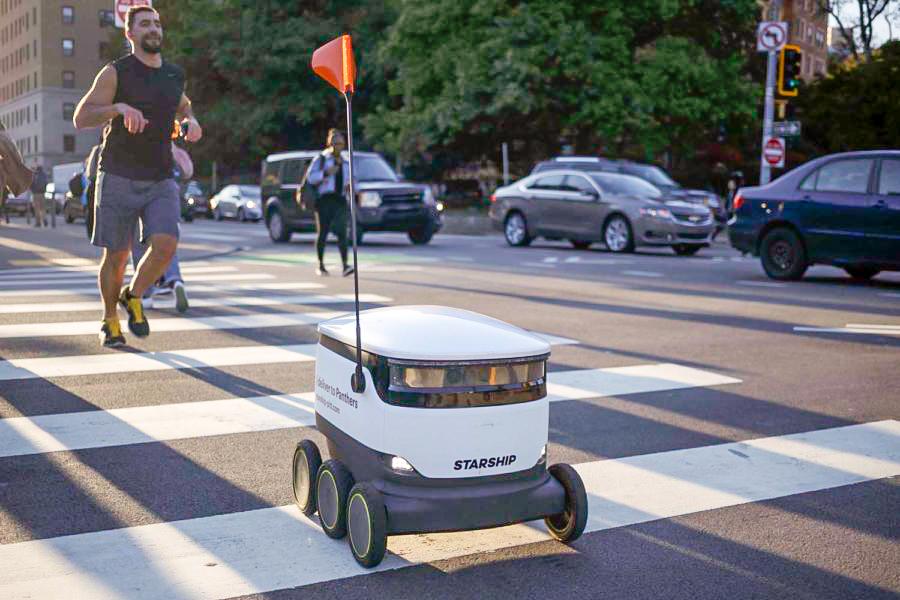 Some of the Pitt community’s smallest pedestrians, Starship Technologies food delivery robots, are missing from Oakland sidewalks this semester.

The robots, which became part of campus culture, provided a meal option right outside students’ doors. In a partnership with Starship Technologies, the advanced dining alternative became fully operational on Pitt’s campus in January. Standing at 2 feet tall with six wheels, these self-driving robots shared the sidewalks with Pitt students and other Oakland community members.

Once students downloaded the app, they were able to order food from campus food spots, such as Forbes Street Market or Einstein Bros. Bagels. They could pay using Dining Dollars, Panther Funds or credit cards. The robots then arrived at their dorms with the food.

The absence of these robots is due to the University’s recent transition in dining contractors from Sodexo to Compass Group. According to Pitt spokesperson Pat McMahon, the delivery robots aren’t currently active on campus, but they have the potential to return.

“We are currently looking at the best methods for food delivery services on campus,” McMahon said. “The Starship program is in discussions with our new food service provider, Compass Group, and we’ll continue to discuss dining innovation opportunities in the future to serve the Pitt community.”

Victoria Chuah, a junior computer science major and Student Government Board member, said due to COVID-19 health concerns, the presence of contactless delivery would be useful on campus.

“I think that these would be the perfect option for food delivery right now,” Chuah said. “So many people worry about the human interaction aspect of ordering food right now, so this would literally take that concern away.”

Students have other reasons for missing the robots this semester. Maddie Stinson, a senior chemical engineering major, said the flat delivery rate of $1.99 was the robots’ best feature.

“I love them. They beat Uber Eats or any chain of that sort, because the service fees/tip attached to those apps are about ¼ the cost of your total meal,” Stinson said.

Stinson posted a TikTok about the robots this February, which accumulated nearly 800,000 views. The video showed one delivering a meal from Taco Bell with the love song “Make You Mine” by PUBLIC playing in the background.

Like Stinson, many students enjoyed photographing the robots. Chuah said the robots were beloved members of the Pitt community.

“I always thought students loved them,” Chuah said. “Anytime someone saw them rolling down the street, people would always take pictures or point them out, they’re super cute!”

The Starship robots carried items within a 4-mile radius of campus for local deliveries. They were 98% autonomous, equipped with a GPS and camera, so human monitors could take command if necessary.

But according to Ryan Ferrante, a senior biology major, problems did arise.

“The robots couldn’t make it up the hill to the Pete,” Ferrante said. “If the weather wasn’t perfect, they would have issues. If students passed, the robots would just stop in the middle of the sidewalk.”

During the University’s initial testing period with Starship Technologies in October 2019, concerns were raised about the safety issues robots created for wheelchair users. Ferrante said he observed robots blocking access to intersections.

“They often got in the way of people with disabilities who needed to use the ramps to get up on the sidewalk,” Ferrante said.

According to Chuah, the robots’ “cute factor” may have outweighed their functionality. She said this was due to the radius of delivery that prevented off-campus students from utilizing the service and the robots’ inability to drive up hills.

“I love the robots and think that they’re super cute, but I honestly don’t know that they are that practical,” Chuah said.