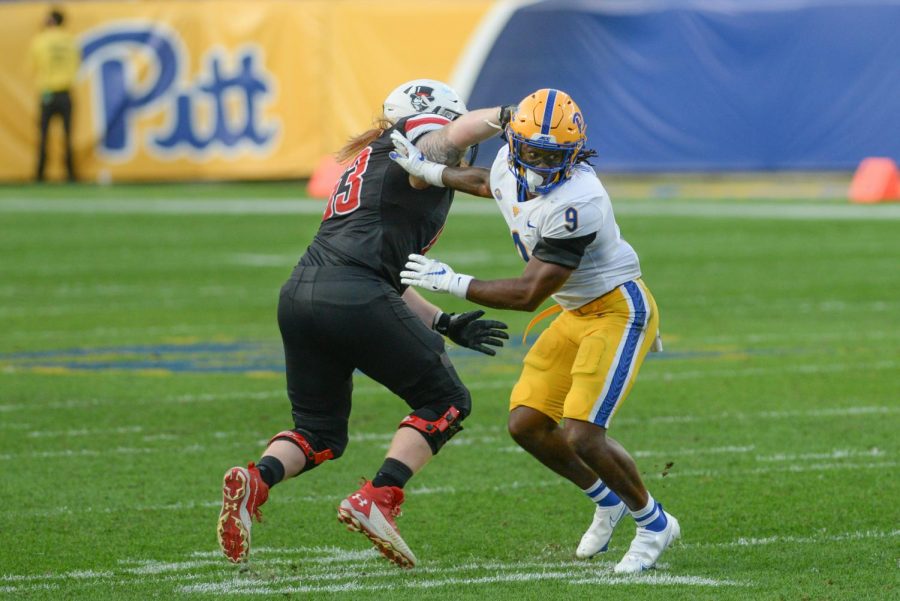 Pitt lost to Boston College 31-30 in an overtime thriller on Saturday.

Coming off a 21-10 win over Syracuse, the Pitt Panthers (2-0, 1-0 ACC) take on the Louisville Cardinals (1-1, 0-1 ACC) Saturday at noon at Heinz Field for their toughest matchup of the young season.

Although it walked away with a win, missed opportunities loomed last weekend for Pitt. One fumble lost, one interception and two missed field goals led to a low-scoring game against Syracuse. If redshirt senior kicker Alex Kessman makes both of those kicks — from 37 and 45 yards — it’s a 17-point win instead of 11. It’s hard to kick at Heinz Field, but head coach Pat Narduzzi has faith in his kicker’s readiness.

“Yeah, we’ve noticed a couple things here. He had opportunities,” Narduzzi said. “We’ll get it fixed, too. Same thing, coach-wise, that’s our job to get him right … There’s so much to do at that position, sometimes you have to just wipe it clean, start fresh. That’s what we’ll do with him this week. I think we’ll get him right.”

Senior quarterback Kenny Pickett’s interception came in the red zone, stifling a drive that looked promising after a Syracuse defensive pass interference. The one fumble came deep in Pitt’s own territory, at the 14-yard line. Luckily, the Panther defense held the Orange offense to just a field goal.

Pitt’s offense, although strong overall, left points on the board on three separate occasions. It doubled Syracuse’s total yardage, 342-171. If you take away the defensive blunder when Taj Harris burned the Pitt secondary for a 69-yard touchdown reception, ’Cuse ends the game with only 102 yards. Seven Pitt penalties for 70 yards, as well as the other errors mentioned above, allowed the Orange to stick around well into the second half.

Well protected for most of the game, Pickett hit the turf three times against Syracuse. The offensive line impressed Narduzzi, despite allowing three sacks against the Orange after Austin Peay didn’t get to Pickett once.

“As a whole, I thought our offensive line played much better,” Narduzzi said, “Even though they got winning grades a week ago, I thought they played better Saturday than they did the week before.”

The Pitt offensive line is responsible for more than just protecting the quarterback, however. The running game will be the most important aspect of Pitt’s offense in Saturday’s matchup. If Pitt can’t get its defense good rest with a balanced offensive game plan keeping the Louisville offense off the field, this game could turn into a shootout. Pitt’s o-line is the key to its offense, and redshirt junior offensive tackle Carter Warren knows players must build off their first two performances.

Narduzzi said his philosophy is to get 3% better every day, and it seems as though the players have bought in. Great play from Warren and the offensive line seemingly doesn’t mean much, as they believe there’s always room to improve.

Louisville comes off a 47-34 loss to Miami in which its defense couldn’t stop a nosebleed. Not known for their defensive prowess, the Cardinals’ offense is elite. Preseason All-American junior wide receiver Tutu Atwell, along with redshirt junior quarterback Malik Cunningham, lead the Louisville passing attack. Cunningham threw for more than 300 yards and three touchdowns against Miami, with Atwell reeling in eight of those passes for 114 yards and two touchdowns.

“Tutu is a great player, explosive, probably a 10 400-meter guy,” Narduzzi said, “may be one of the fastest receivers we’ve ever faced. He’s excellent. They’ll try to get him matched up on Paris [Ford] and obviously Damar [Hamlin], the slot receiver spot. He’s dangerous.”

On top of a great passing game, the Cardinals boast a preseason All-ACC selection in redshirt sophomore running back Javian Hawkins. Hawkins carried the ball 27 times for 164 yards and a score last week.

Pitt comes in ranked No. 21, while Louisville enters at No. 24. To some, this could produce nerves, as it is the first meeting of top-25 teams at Heinz field since 2009. Narduzzi doesn’t believe his players care, and he won’t bring it up to his team.

Playmakers on both sides of the ball for both teams make this matchup incredibly interesting. Regardless of ranking, Pitt knows the challenge Louisville’s offense presents. On the other side of the ball, the Panthers recognize the opportunity for a massive offensive showing if they can limit the mistakes.

This may be the hardest game to predict on Pitt’s schedule, as the teams are utter opposites. Louisville comes in with a top-tier ACC offense, but an average to below average defense. Pitt has one of the best defenses in college football, but an inconsistent offense that often misses opportunities to put points on the board.

Pitt will get its ground game going, which will open up the passing attack later on. The Panthers defense will stand strong against Louisville’s offense, but Cunningham and Atwell will do enough to keep this game close down the stretch. I don’t expect either team near the 50-point mark like Miami, making this game a battle from start to finish.

I expect Pitt to win, but not by much. I’ll be genuinely surprised if the game is decided by more than a touchdown.