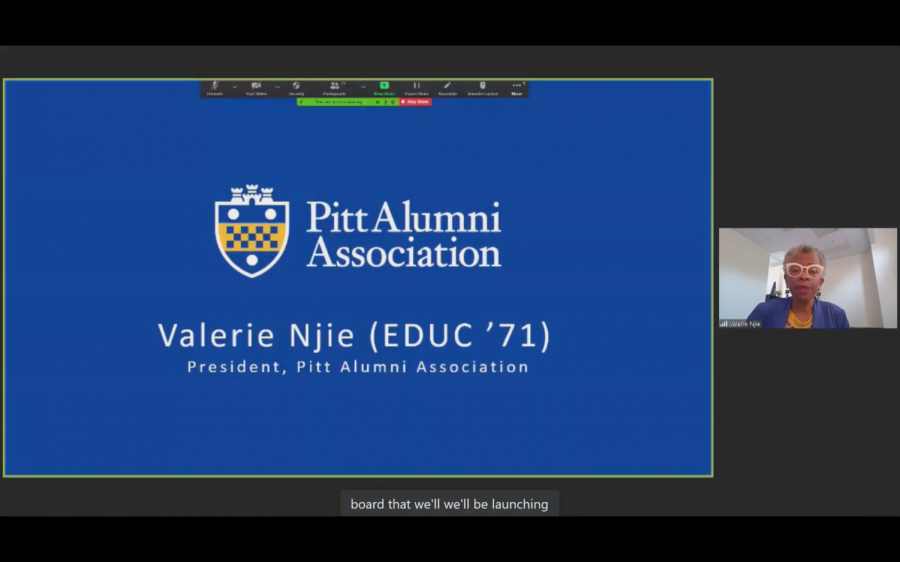 Valerie Njie, the president of the Pitt Alumni Association, spoke at Friday morning's board of trustees meeting.

Pitt’s board of trustees approved several measures at its Friday morning meeting, including five new emeritus trustees and amendments to the University bylaws.

The board unanimously approved Michael Bryson, Robert Lovett, Martha Munsch, William Strickland Jr. and Stephen Tritch as emeritus trustees for life. All have served as trustees for decades on the board.

The board also approved a change to Pitt’s bylaws, which would change the title of “non-tenure-stream” faculty to “appointment-stream” faculty. The measure was previously approved by the Senate Council and Faculty Assembly.

Pitt Alumni Association President Valerie Njie, a 1971 graduate of the School of Education, presented an annual report on the PAA at the meeting.

Njie said the Alumni Association would introduce new anti-Black racism initiatives to make Pitt more equitable and further support Black students. Some of the new measures include mentoring programs, first-year-parent dialogues and webinars for Black students and their parents. PAA has also formed an equity and social justice task force — which will submit a report by Dec. 31 — to study diversity and inclusion in alumni relations.

“We will continue to create opportunities on all Pitt campuses for Black students to engage with Black alumni, advocate for and spur meaningful dialogue with them,” Njie said. “We want our Black students to know that we are a resource for them at all times.”

Njie added that the PAA has been able to overcome the two largest challenges to alumni engagement — time and distance — through new technologies. She pointed to Pitt Commons, where students and alumni can network, and Ask Pitt Alumni, where students and young alumni can get quick answers to career-related questions, as examples of this.

“Pitt alumni said they want us to be innovative,” Njie said. “This is one way we are doing that.”