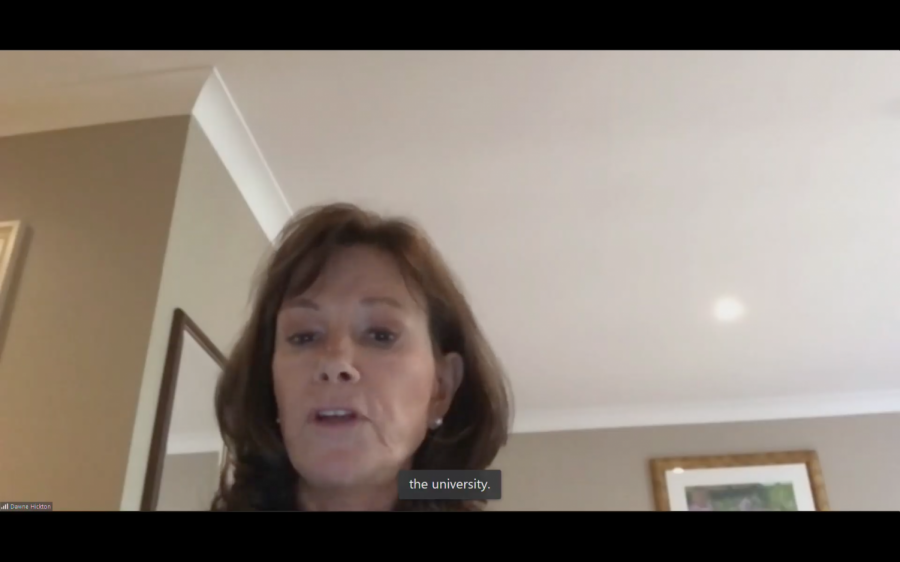 Dawne Hickton, the chair of the ad-hoc committee on fossil fuels of Pitt's board of trustees, spoke about the committee's work Friday morning.

The ad hoc committee of Pitt’s board of trustees investigating whether or not the University should divest its $4.3-billion endowment of fossil fuels is hard at work to meet its “compressed and intensive schedule,” according to chair Dawne Hickton.

“The committee as a whole is aware of the importance of this matter to the University and to the members of its community,” Hickton said at Friday morning’s board of trustees meeting. “It is an important issue.”

The board formed the committee in June after years of pressure from the student body, including groups such as the Fossil Free Pitt Coalition, who staged a sit-in at the Cathedral of Learning last spring, as well as a protest at February’s board meeting. The board of trustees unanimously approved a formal socially responsible investing process and committed to carbon neutrality by 2037 in February.

The committee is charged with providing a report by Jan. 15, 2021, with options on “whether, to what extent and via what methods the University, in its endowment, should consider divestment from fossil fuels in existing and/or future investments.” Hickton said the panel has already held four private meetings with “full discussions” and plans to hold public forums in October and November to gather feedback, as well as meetings with investment professionals at other colleges and universities, foundations and private firms.

FFPC has had members present to the committee about the moral case for divestment and the pressing need for community reinvestment.

“While we were happy to provide our perspective, this committee is a stalling tactic — the reasons for divestment are already abundantly clear,” the coalition said. “The University’s commitment to snail-paced bureaucracy is extremely disappointing considering the urgency of the climate crisis. Students have been demanding divestment since 2014. There is no time to lose.”