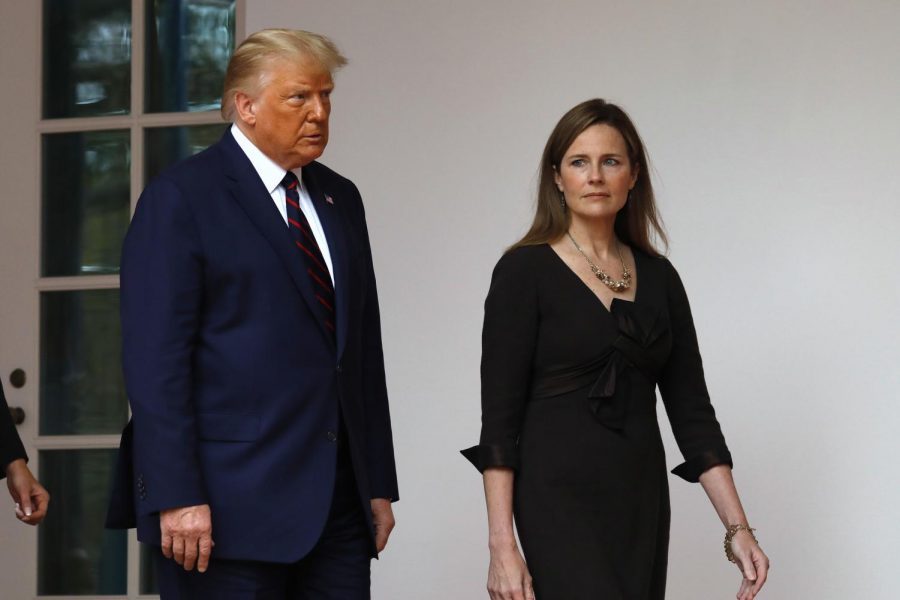 President Donald Trump arrives with Judge Amy Coney Barrett to introduce her as his Supreme Court Associate Justice nominee in the Rose Garden of the White House on Sept. 26.

President Donald Trump nominated Judge Amy Coney Barrett to the Supreme Court on Saturday. The nomination came in spite of protests from Americans across the country, as well as many politicians, that the Senate should not fill the current Supreme Court vacancy until after the Nov. 3 general election.

Many Senate Democrats, including Cory Booker, Kamala Harris and Elizabeth Warren, have been outspoken about their disapproval of the nomination, but their statements are not enough. Democrats — and anyone else who opposes Barrett’s nomination, for that matter — must take substantive, physical action to stall the confirmation of a new Supreme Court justice through means of quorum calls, withholding unanimous consent or any other means necessary.

The next justice on the Supreme Court should be replaced by whoever is instated to the presidency — or reinstated, should Trump be reelected — so that they can most accurately represent the political values and views of the American people. But, it seems that this will not be the case, as Republicans likely have the necessary votes to confirm Barrett’s nomination — they only need a simple majority to do so, and they are the majority party in the Senate.

One of the major arguments that the Supreme Court vacancy should not be filled until after the election is that in 2016, when the country faced a similar situation following the death of Supreme Court Justice Antonin Scalia, the Republican-controlled Senate blocked attempts to confirm Merrick Garland, President Obama’s nominee for the Supreme Court. But some Republican senators don’t seem to care that they are blatantly going back on their previous word to establish a conservative majority on the Supreme Court. Notably, in 2016, Senator Lindsay Graham, R-S.C., clearly stated his opposition to confirming a new justice during an election year.

“I want you to use my words against me. If there’s a Republican president in 2016 and a vacancy occurs in the last year of the first term,” Graham said, “you can say Lindsey Graham said let’s let the next president, whoever it might be, make that nomination.”

This blatant hypocrisy is undeniable, but Graham doesn’t care. He’s gone back on his statement, claiming the Senate has enough votes to confirm Barrett, and that members will move to vote on her confirmation before the election.

While Graham is absolutely right that all of this is the “constitutional process,” it does not need to begin until after the election is finished. However, it is abundantly clear that Republicans simply do not care about this, and as such, it is up to Democrats to stall or entirely block, if possible, Barrett’s confirmation until after the election using any means necessary.

Blocking Barrett’s confirmation will certainly be a difficult task, but it is vital for the well-being of many Americans, as well as to the state of our government itself. Should the Senate successfully confirm Barrett, we will fall further under the grasp of right-wing, minoritarian rule in America.