‘Why are they angry with us?’: Larry Davis talks systemic racism 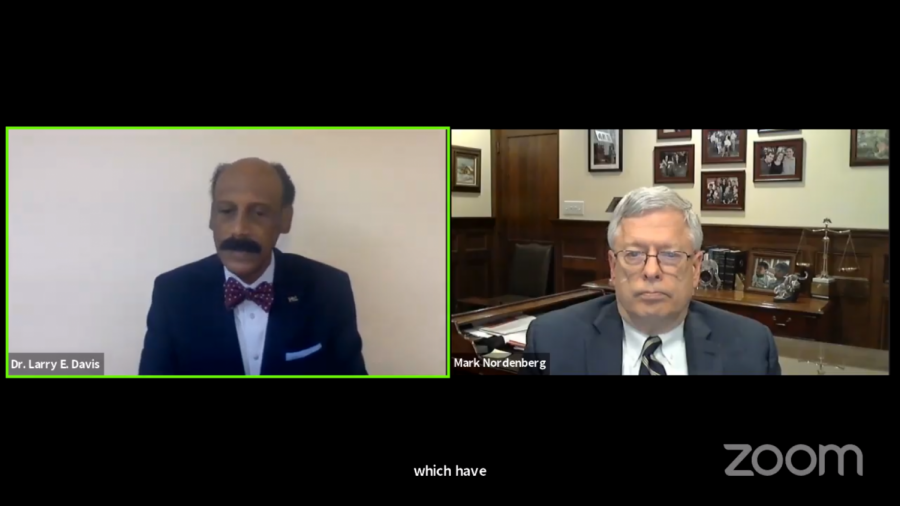 By Alice Tang, For The Pitt News

When Larry Davis was a 7-year-old boy, he asked himself a question that would later inspire him to write his book “Why Are They Angry With Us?: Essays on Race.”

“If we, Black people, were slaves, why are [white people] angry with us?” Davis said.

Davis — the founding director of Pitt’s Center on Race and Social Problems, as well as dean emeritus of the School of Social Work — talked about his book and issues surrounding race at the “Will Race Always Matter?” lecture Tuesday evening. The event was hosted by the CRSP, Thornburgh Forum, the University Honors College, the Institute of Politics and the School of Social Work.

Davis is also an award-winning author and the first Black person to earn a Ph.D. in social work and psychology from the University of Michigan. At the event, Davis discussed what he views as the four major factors of the present-day racial crisis — visibility, the country’s changing demographics, declining standards of living and challenges to white supremacy.

“Technology has served to pull back the curtain on our country’s systemic racial problems,” Davis said. “The time showing us things we did not know along with things we have resisted seeing.”

Mark Nordenberg, chancellor emeritus and chair of the University’s Institute of Politics, said Davis originally had his speech prepared for last spring before the COVID-19 pandemic, but had to rewrite it because of the ongoing “racial reckoning” in the country.

“Dr. Davis has [rewritten his talk], which was before George Floyd was killed, before the Black Lives Matter movement … and before what has been called the time of racial reckoning arosen,” Nordenberg said.

Davis said the killing of George Floyd was “unquestionably” the last straw that ignited not only national outrage, but world condemnation.

“Before the advent of the video camera, most Americans had probably assumed that police shootings of Black and brown people were infrequent events,” Davis said. “They were gravely wrong.”

Davis said people’s increasing awareness of racial issues is partly due to the changing demographics of America, with each successive generation becoming less white than the one before it. According to projections by the U.S. Census Bureau, a majority of the U.S. population will be nonwhite by the year 2044.

“During our lifetimes, America has undergone dramatic demographic changes,” Davis said. “Changes have brought America to what social psychologists refer to as a racial tipping point.”

When discussing changing demographics, Davis also mentioned the concept of white flight. According to Davis, this is when white people exit schools, neighborhoods and even bars after they become integrated because white people no longer feel comfortable and in control.

Davis said this explains why many white people voted for President Donald Trump in 2016, even though his policies heavily discriminated against minorities — they voted for him out of fear of becoming outsiders in the country.

“On the whole, non-college-educated workers were seeing their income stagnant if not decline for the past three decades,” Davis said. “Hence, they are understandably angry and depressed about it. It is not surprising that they are looking to confront those who have taken their jobs.”

Davis said challenging white supremacy is a critical step in confronting today’s racial crisis. He said it’s important to recognize that white people have always had political, social and economic privileges over people of color.

Davis added that many white people are unaware they benefit from white supremacy.

Davis said he wants white people to recognize their essential role in the battle for racial equality.

“We have to have white alliances, [Black people] don’t have the muscle, political or economic clout to pull this off ourselves,” Davis said. “We don’t want [white people] to give up privilege, we want them to give us privileges too.”

Davis gave a call to action for white people to step up and take action, so change must be brought about on every level of society. He said the question of if race will always matter can be summed up in two words — “it depends.”

“It depends on whether or not America decides to stop state-sanctioned killing of people of color and come to accept the reality that we have become a multiracial country,” Davis said. “[We must] bring about a more equitable distribution of income and wealth and take steps to rid itself of white supremacy.”