Narduzzi, Pitt thriving in new normal, but ‘not out of the woods yet’ 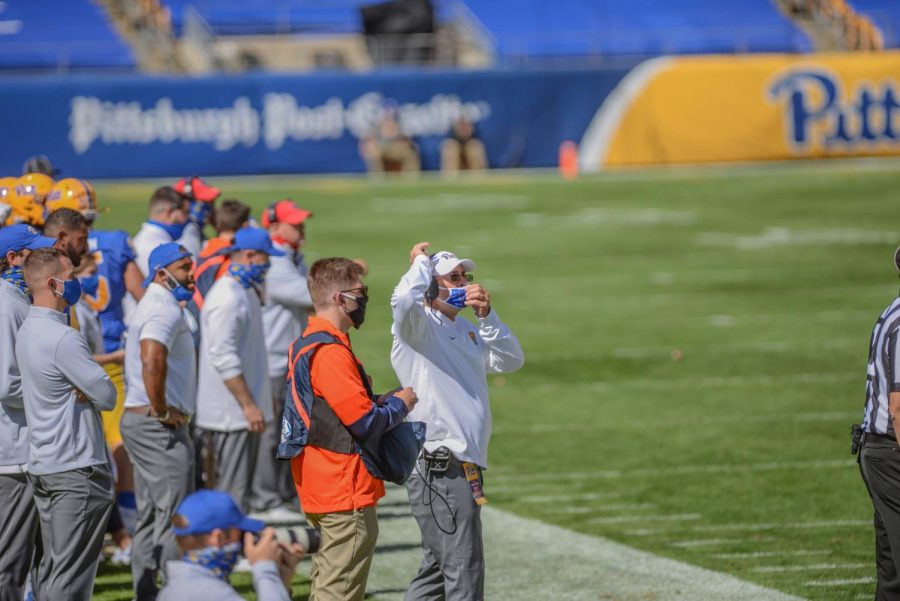 Football head coach Pat Narduzzi discussed Saturday’s game against Louisville and hinted at the potential to have some fans at Saturday’s NC State game in his weekly press conference on Monday.

Normally, right now is what would best be described as college football’s “dog days.” The weather begins to take a turn for the colder as conference play hits full swing and expectations either balloon or crash with a single game.

But despite adding another notch to their undefeated record with a 23-20 win over then No. 24 Louisville on Saturday, the Pitt Panthers are still being “slept on,” according to head coach Pat Narduzzi.

He added that he still expected more, even after his defense’s stout showing against the Cardinals.

“We recruit too. We have scholarships we give out and we try to get fast guys too,” Narduzzi said. “I didn’t think they should have been able to move the ball on us last week.”

After beating a nationally ranked team, Pitt dropped four spots in the AP poll from No. 21 to No. 24. Naturally, the addition of Big 10 and PAC 12 teams to the rankings pushed the Panthers down, but they still take it as disrespect. Redshirt senior safety Damar Hamlin — one of the many stars on the loaded Pitt defense — took a particular offense.

“How do you go down in rankings after beating a ‘ranked team’” Hamlin tweeted on Sunday. “When there’s teams ahead of us who lost to unranked teams & also teams who y’all haven’t even seen play football this season.”

But the Panthers continue to fly relatively under the radar — clearly good, but nowhere near potent enough on offense to meet the lofty expectations they set out for themselves in 2020.

Narduzzi lamented his offense’s performance in the red zone, where they were held to three field goals. Even though it led to a bounce-back game for slumping place kicker Alex Kessman — he made all of his three attempts on Saturday — Narduzzi said he would rather watch Kessman kick extra points than field goals.

“Obviously really happy for Alex, but if he stays on the sideline and kicks into a net all game, I’ll be happy for him too,” Narduzzi said.

Narduzzi added that he was nonetheless encouraged by the play of the offensive line, as well as sophomore running back Vincent Davis and first-year wide receiver Jordan Addison.

Addison’s seven receptions for 77 yards put him squarely at the top of the conference in receptions and seventh in receiving yards. Davis, meanwhile, took the bulk of the carries at tailback and totaled 47 yards on the ground, in addition to 29 yards receiving.

There’s a lot of familiarity being folded into Pitt’s new normal of college football amongst pandemic restrictions. The Panthers will play their fourth straight game at home and third straight on Saturday afternoon with a noon kick-off in front of an empty Heinz Field.

But Narduzzi also hinted that there is “a chance” that the 2020 season’s gameday environment makes a major change — allowing fans in the stands.

“We don’t know right now, but I’m saying my prayers tonight,” Narduzzi said about the chance to get people into seats on the North Shore. “Parents would be the No. 1 thing.”

In making his sell for parents of players to be allowed into stadiums for games, Narduzzi also made sure to highlight how well his players had been mitigating the spread of COVID-19. He claimed to have offered some not-so-gentle reminders, and said they were effective.

“I got to constantly remind them that you’re one game away,” Narduzzi said. “We’re not out of the woods yet. Just because we’re good right now doesn’t mean we’ll be good in the future … We’ve got to earn the right to play.”

That was the theme of the day — whether they’re trying to climb the rankings, close out a game or control a pandemic, Pitt has plenty of work to do. That work continues on Saturday when the Panthers host NC State.