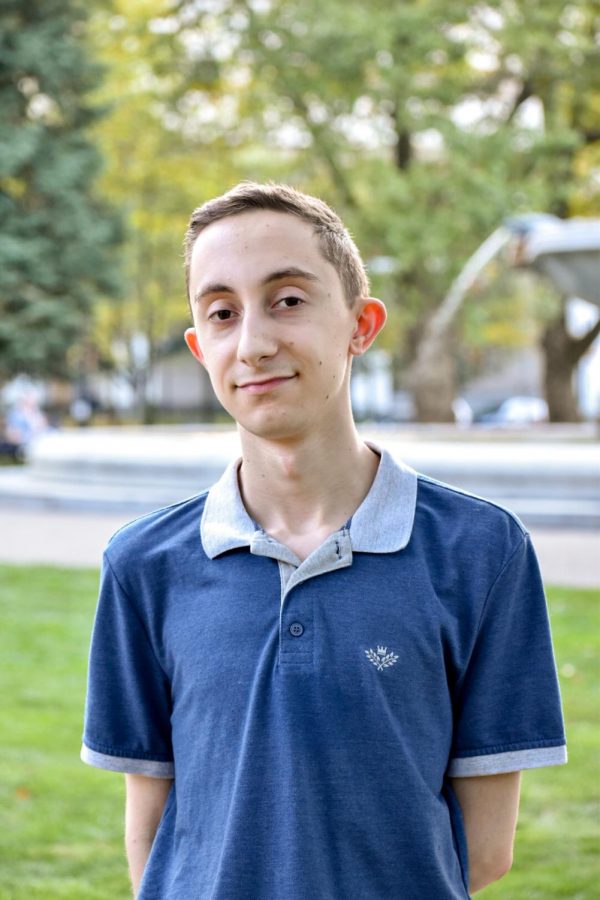 Noah Kotzin, a senior music composition major, faces uncertainty in the workforce after graduation due to the pandemic’s effect on the music industry.

With many theater and venue doors closed to the public, students and professionals in the arts industry are having to open doors of their own during the COVID-19 pandemic.

Due to the live, in-person nature of many theater and musical programs, these arts programs have been some of the hardest-hit industries during the pandemic. In Pittsburgh specifically, many local theaters have had to close their doors to the public and adapt to a socially distanced world, and young professionals have had to adjust their careers.

According to Laura Valenti, a freelance set designer and scenic painter, she had to switch gears to stay afloat once the pandemic hit.

“There’s not really a lot of theater happening, so in the past couple months I’ve actually started working for a renovation company doing interior painting,” Valenti, a 2018 Pitt alumna, said. “In a weird way, it’s kind of

transferring my theater skills from what I was doing previously but now just for interior design.”

Like many other young professionals, Valenti had to adjust to the pandemic. She said she was supposed to debut her first New York City show the night before the city shut down in March.

“I set-design my own, smaller shows, and I designed a show at City College of New York,” Valenti said. “Sadly, it got cancelled the night before we were supposed to open because of COVID, so I didn’t get to debut my first set design in New York.”

The pandemic has also impacted local theaters’ ability to hire artists. Catherine Kolos, the general manager of PICT Classic Theatre, said that the shutdown in March was a drastic change for her small theater in Shadyside.

“The shutdown was monumental for us,” Kolos said. “We had to cancel our final show of last season, and we are a small theater company, so that was our main source of revenue. In March, we had no idea what to do or how to navigate through this.”

Although the theater closed for a few months, PICT now plans on catering its upcoming shows to a virtual audience. According to Kolos, PICT wants to keep these virtual shows as a permanent fixture in the theater’s future programming.

“We decided that we liked the idea of going virtual, but we wanted to make sure that it was a permanent feature of our programming moving forward and not just a reflexive response,” Kolos said.

PICT plans to release a monthly series of radio dramas that features three different shows from October to December. According to Kolos, these radio dramas are the first full-production work for actors in Pittsburgh through Actors’ Equity, a theater union, since the shutdown.

“It took months of organizing and negotiating and coordinating with Actors Equity and with our health care providers and Allegheny County health codes,” Kolos said.

Kolos said PICT set up recording booths made of plexiglass to safely separate the actors while simultaneously allowing them to interact in person to record these radio dramas.

“We had to completely reenvision how we create and what the rehearsal process looks like,” Kolos said. “With the plexiglass, they can still interact with each other, which is a huge part of what’s missing from virtual platforms like Zoom.”

Even though PICT is able to produce a show, many other professionals in the industry are still out of work. Valenti acknowledged that the theater industry is tough for a lot of people right now, but she said she also sees some positives in the situation.

“Despite a lot of us being unemployed, I have been seeing a lot of great things coming about,” Valenti said. “I think that there is so much down time right now that there’s a lot of reflection on theater, and people are starting to call out a lot of injustices in the industry.”

Specifically, Valenti pointed out the high pressure and long hours of her profession. She said many young theater professionals burn themselves out only a few years post graduation.

“We have been reevaluating the question of why we work so many hours just to burn ourselves out,” Valenti said. “And why are some of the programs that we’re doing burning out young theater professionals before they even get a chance at professional life?”

Along with pointing out issues within the industry, Valenti offered advice for current students looking to enter theater arts after graduation. For her, the most important thing you can do is create a network early.

“I would say that my biggest advice that I always give to any young professional is, especially when you’re in college, is start creating your network now,” Valenti said. “It’s so important because people start to get to know your name, which gets you great exposure.”

Additionally, Valenti emphasized that arts students shouldn’t be putting pressure on themselves to throw themselves into the industry. She suggested that students take the time to think about what other sorts of skill sets they can work on during this time.

“I think right now you shouldn’t pressure yourself to figure out how to get into theater, because there’s really no theater to go into,” Valenti said. “Take the time to expose yourself to new skills, and I can promise you that any skill set you have will be valuable in the future.”

For some students in the arts, the pandemic has led to uncertainty for their post-graduation plans. Noah Kotzin, a senior music composition major, has had to rethink going directly into the workforce due to the instability of the music industry.

“The job market for performers is already sparse, and I’m majoring in composition, so that’s even more thin and very much commission-based,” Kotzin said. “So I want to go to graduate school to maybe get a better footing and work toward film composition in the future.”

According to Kotzin, most of his composition work can be done from home, but virtual platforms like Zoom can diminish the sound quality of instruments.

“For the most part, I can work from home for composition,” Kotzin said. “But for one online class, we need to explore the certain qualities of different instruments, so there’s a lot of limitations in that respect.”

For Kolos, this is a moment in the industry that artists will remember far into the future. Kolos said that this is an important time for both students and professionals to reflect on what types of things matter most to them.

“This is one of those moments in history that we’re all going to look back on and study for years,” Kolos said. “It’s a great time to refocus on what is important to us, not just career wise, but on a much larger level.”

Kolos acknowledged the fact that many theaters are still struggling due to the devastation of the pandemic. According to Kolos, however, the most important thing for arts professionals and students to do is to keep supporting each other.

“Each theater is terrified and wondering if their doors are going to open again,” Kolos said. “The key is to continue to support each other and create a space that is safe and equitable for everybody.”