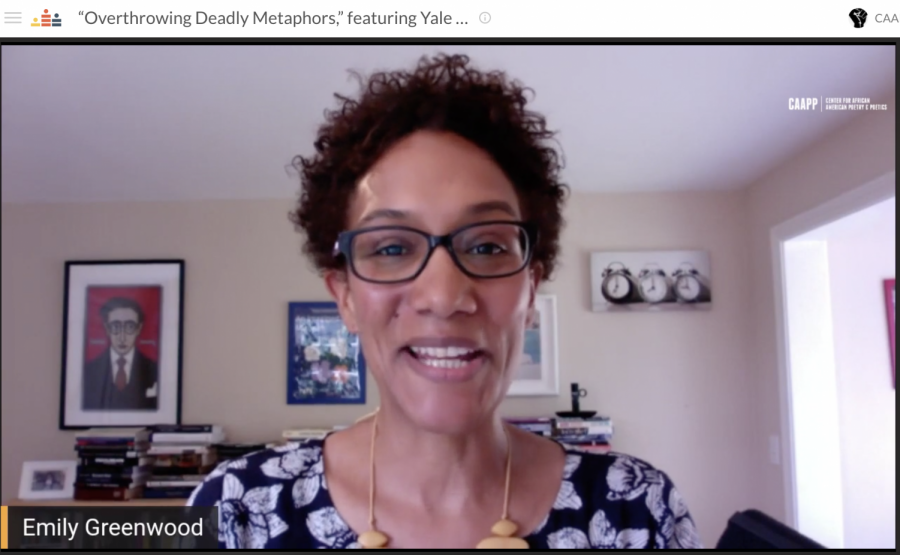 Students study translated texts from the Greek philosopher Aristotle in many political science and classics courses across the world. But Emily Greenwood, professor of classics and African American studies at Yale University, said some of these translations are missing the mark.

“It’s so important universities provide historical and critical context to enable students, to enable ourselves to make connections and to see the allusions and echoes and what ideas are being smuggled in and what traditions are being evoked,” Greenwood said.

The week’s events revolve around the theme of “collective protest and rebellion” and are co-sponsored by the Department of English, Year of Creativity, Center for Creativity, Pittsburgh Contemporary Writers Series and Office of the Associate Dean for Undergraduate Students. A quote from scholar Fred Moten’s book “The Undercommons: Fugitive Planning and Black Study” serves as the theme for the week’s events. Moten wrote about studying not being solely an individualistic act, but one centered on community.

“We are committed to the idea that study is what you do with other people,” Moten said. “It’s talking about and walking around with the other people, working, dancing, suffering, some irreducible convergence of all three, held under the name of speculative practice.”

According to Steffan Triplett, interim assistant director of CAAPP, the week’s events aim to bring people together.

“Studying doesn’t have to just necessarily be about reading and writing,” Triplett said. “There’s also talking about the things we’re doing — it’s about being together, laughing together, grieving together.”

Triplett said the present COVID-19 pandemic and civil rights movement were a catalyst for changing the style of the study of diversity.

“We want people to have a space to grapple with the current moment — this pandemic moment and this moment of racial injustice — across America, and really across the globe,” Triplett said. “We see this week as a response to that and a way to change the way we typically study ethnic diversity.”

Greenwood’s work blends analysis of classics with Black studies, two areas which, according to Triplett, people may not immediately correlate with each other. Her talk centered on Aristotle and a metaphor he wrote about enslaved people in his book “Politics,” which he published in the fourth century B.C.E. She quoted an excerpt in which Aristotle compared enslaved people to animate pieces of property.

Greenwood explained that this passage is from a section where Aristotle talks about the relationship between enslaved people and their masters. He supported a theory of natural slavery, which argues that some humans are predestined for a life of slavery. For Greenwood, it’s more than a question of why he wrote this or how this way of thinking about slavery seeps into his ethical and natural philosophy. She said her studies of this passage and Aristotle’s philosophy revolve around how he wrote his works, his word choice and the subtle words he used to “misconstrue the humanity of the enslaved.”

“What interests me is how Aristotle sat down and wrote that sentence. And the philological steps involved of imagining and rendering a fellow human being a thing or a piece of property,” Greenwood said. “Aristotle’s theoriziation of natural slavery is slapdash and cobbled together. It relies on a loose style of argumentation in which explanatory conjunctions and particles do heavy argumentative work, tying together ideological fictions.”

Greenwood quoted scholar Sheldon Pollock, author Toni Morrison and researcher Peter Garnsey in her analysis of Aristotle’s metaphor and what it means. She pointed out a very specific word often skipped over when translating “Politics” — the Greek word “τι” — which translates into “sort of.” Aristotle used this word when describing the slave as a “sort of” animate object.

Not all scholars translate Aristotle the same, with some taking liberties in the words they chose to bring over from Greek. Greenwood pointed to Benjamin Jowet’s 1885 translation of “Politics” as an example of this, as he translates the sentence into “A slave is a living possession,” leaving out the words “sort of” in his translation. Greenwood said by omitting this word from translations, Aristotle is not held accountable for his normalization of the unnatural.

“Many English translations of this passage skip the little participle that shows Aristotle wrestling with meaning. [Jowet] omitted this indefinite pronoun of ‘sort of’ or ‘kind of,’ which in the Greek connotes vagueness, indicates the oddity of what Aristotle is claiming,” Greenwood said. “We see here, in Aristotle’s Greek, language being used to normalize and naturalize that which is not natural and normal.”

While Greenwood noted that Aristotle did help spread his inhumane views on slavery and equality through his writings, she said she is not worried his readers will endorse his philosophy of natural slavery. Instead, she said she is worried the habit of relying on incomplete translations will inhibit readers from truly analyzing and scrutinizing pieces of philosophical text.

Greenwood said this strategy of critically analyzing writing is not limited to classical writers, but is a practice that should be used with modern texts and political leaders, as well.

“Just as we should be asking and scrutinizing of our politicians and public leaders, the ethical choices that they make and their use of language,” Greenwood said.
Dawn Lundy, director of the CAAPP, said Greenwood’s talk serves as a fitting discussion during the current national reckoning about racial justice.

“It’s so appropriate for the beginning of this week — at this moment in history, we’re having lots of conversations about how we got to this particular place in this country and around the world where it seems change is intractable and that there are perceptions of the racialized body that we ask questions about,” Lundy said.

Lundy said Greenwood’s talk was a reminder of the impact history has on the present.

“I found [Greenwood’s] talk to be not only illuminating but reminding us of those parts of history, that in terms of political thought, either we don’t know or sometimes forget, provide really a cogent and material trances into the present,” Lundy said.

Greenwood said when universities avoid talking openly about race, this prevents students who have been raced from discussing their lived experiences.

“Sometimes it’s a good faith response of saying, ‘Don’t talk about race,’ ‘Race is a horrid concept,’ ‘You are not raced.’ And yet, that takes away a set of language, forms of language, that have structured your whole life and existence involuntarily in a third-person sense,” Greenwood said. “Often the first encounters were as a child when you realized that you are not who you thought you are. You realize that you are construed as a problem by some people in society and that a tradition follows you or is projected onto you.”

Greenwood said she urges Black people to define their own identity on their own terms, rather than let society characterize them.

“I suppose strategic essentialism is the way to say, ‘Yes I’m going to talk about my Black body and the way that it is construed and treated by society,’” Greenwood said. “Otherwise, that’s just another gift to those who would like to avoid and deny the continuing operations of race.”