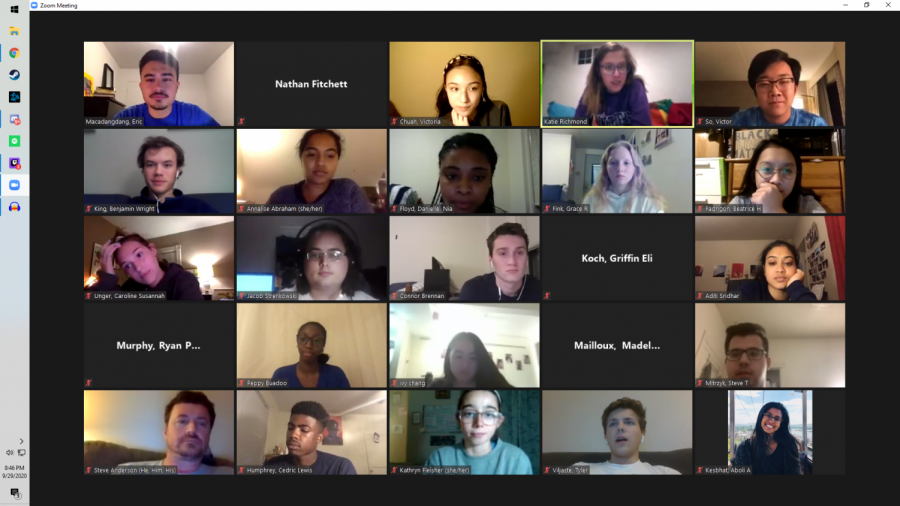 Cedric Humphrey, the executive vice president of the Student Government Board, announced at Tuesday evening’s SGB meeting that the Pitt police have once again pushed back its meeting with SGB to discuss meaningful changes to the campus police force.

“Our very much awaited meeting with Chief [James] Loftus and vice chancellor [for public safety Ted] Fritz has unfortunately been rescheduled once again,” Humphrey said. “Hopefully we can schedule another meeting time soon to continue this conversation, because it’s very needed.”

In addition to the update about meeting with Pitt police, the board also swore in 17 new members to various committees and discussed plans for Civic Engagement Week and Mental Health Awareness month at its Tuesday night meeting.

Humphrey said this week’s meeting was pushed back for the second week in a row because the “timing didn’t work out.”

SGB members have been trying to increase communication with Pitt police since the beginning of the semester and discuss police accountability on campus. Before the meeting was pushed back, Humphrey said board members planned to address issues of transparency and feelings from the board. He said board members feel their desire for a conversation about police accountability is considered low priority and a “perceived indifference” toward the issue by the Pitt police.

Board member Kathryn Fleisher said while the Pitt police have made it difficult to schedule meetings, SGB is still pushing for police reform on campus.

“I did want to publicly voice that the meetings have been difficult to schedule, and far from productive,” Fleisher said. “Students who are feeling frustrated by lack of policing reform on campus, please know that you are not alone and that we are listening to you.”

SGB also welcomed a record-breaking 12 new students to its First Year Council this week. The panel is made up of first-year students who show potential for leadership. SGB also swore in two new Allocations Committee members and three new Diversity and Inclusion Committee members.

Tyler Viljaste, the vice president and chief of cabinet, said this year’s slate of applicants for the First Year Council was one of the most competitive in SGB history, despite board operations being limited by quarantine restrictions.

SGB’s yearly Mental Health Awareness Month aims to continue its goal of raising awareness on campus of the stigma surrounding mental health. Danielle Floyd, chair of the wellness committee, said this year’s activities will feature 14 different virtual events throughout October and will focus specifically on mental health issues surrounding COVID-19 and the Black Lives Matter movement. Students can register for events through the Mental Health Awareness Month page on Facebook.

SGB’s Civic Engagement Week kicked off on Monday, with a voter registration presentation led by Ryan Murphy, the chair of the community and governmental relations committee. Tuesday’s event featured a panel from members of the City government. The series of events is devoted to helping students discover ways in which they can get involved in their community. Upcoming events this week include a Zoom viewing and discussion of the film “Stay Woke: The Black Lives Matter Movement” and a student activism panel featuring student leaders and organizers from around campus.

President Eric Macadangdang closed out the meeting by reminding students to reach out to SGB with any concerns they may have during the semester.

“Your voice matters with every decision that we and the University makes,” Macadangdang said. “Please do not hesitate in reaching out.”

Panther CrossFit requested $1,400 to reserve eight gym sessions at Pittsburgh FIT facilities for $150 per session plus a $200 sanitation fee. The request was approved in full.