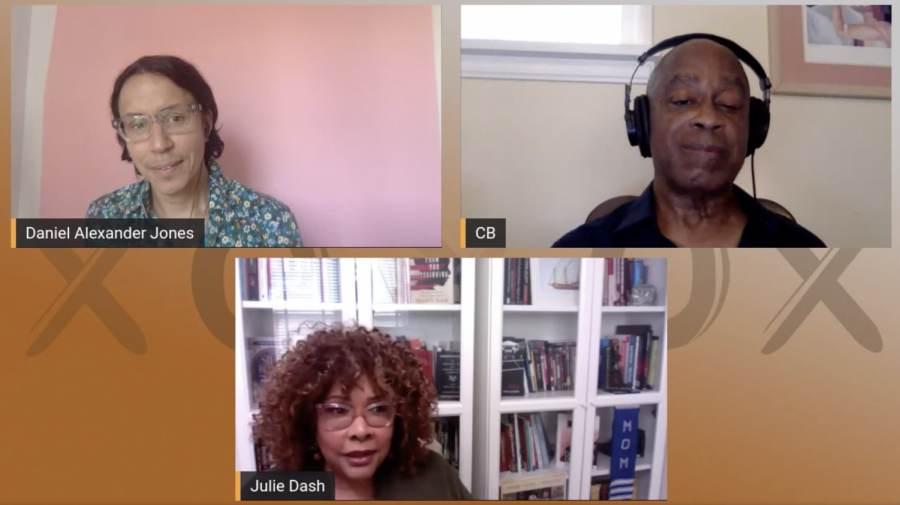 Black filmmakers Charles Burnett and Julie Dash spoke Friday afternoon about their work and legacy as members of the L.A. Rebellion, a group of Black film students at UCLA in the ’60s and ’70s.

Daniel Alexander Jones and his fellow master of fine arts students fell in love with the films of Charles Burnett and Julie Dash while studying at Brown University in the ’90s. So in love, in fact, that Jones felt moved to write and perform a love letter for the pair.

“You focused, revealing all the contradiction and fragility, all the creativity and bravery, all the shadows and bright fire,” Jones read from the letter. “Your lenses were lenses of radical love.”

This letter was part of “Love is the Great Rebellion,” the final event of the Center for African American Poetry and Poetics’ Black Study Intensive. Jones joined Burnett and Dash for a Friday afternoon discussion, livestreamed on CAAPP’s Crowdcast and YouTube channels, about their work and legacy as members of the L.A. Rebellion — a group of Black film students at UCLA in the ’60s and ’70s whose work rejected the conventions of Hollywood cinema.

Dawn Lundy Martin, director of CAAPP and an English writing professor, said she invited Dash and Burnett to speak in part because she, like Jones, found herself inspired by their work during the beginning of her career.

“They were the first films that I actually saw by Black filmmakers that weren’t stereotyping Black people,” Martin said. “I’ve been rewatching their films for 25 years, and I thought how wonderful it would be to gather them and have them talk about their legacy.”

After screening clips from the filmmakers’ work — including Burnett’s “Killer of Sheep” and Dash’s “Daughters of the Dust” — and delivering his love letter, Jones asked Burnett and Dash questions about the Rebellion, their past films and the current state of Black filmmaking.

When Jones asked them about the role of collaboration in the Rebellion, Burnett said much of his interaction with other students involved actively trying to do what Martin pointed out — represent Black experience in a truthful, non-stereotypical way.

“There were a few people of color when I was [at UCLA], but the films that they were making didn’t speak to us, and Hollywood was perpetuating these stereotypes,” Burnett said. “When we came and gathered in a certain mass, we had these intense discussions about, ‘What are we supposed to be doing as Black filmmakers?’”

Burnett and Dash also shared excerpts from their current projects. Burnett’s latest short film, “The Law of Parties,” follows the aftermath of the fictional trial of Robert Hall. Hall gave an acquaintance a ride to a liquor store, which implicated him in a murder case and led to his execution.

Although the film is fictional, Burnett said he based it on a real Texas law that holds anyone involved in a murder responsible for the crime, whether or not they actually carried it out.

“I tried to say everything that I possibly could, and not make the guy an innocent person — he did do it, he admits to doing it. But there’s no empathy or anything in this world, it seems like,” Burnett said. “These people didn’t get a fair trial.”

Dash’s newest work, “Travel Notes of a Geechee Girl,” is a documentary about Black writer and culinary anthropologist Vertamae Smart-Grosvenor. Besides that project, Dash said she wants to produce a screenplay of hers that she first wrote more than a decade ago about the all-Black, all-female 6888th Central Postal Directory Battalion during World War II.

Dash said she has yet to find a studio willing to pick up that project and later added that it can be difficult to fund films that accurately speak to the Black experience, because in her view, production companies often place profit over authenticity.

“I want to see me on the screen,” she said. “I don’t get to see that. When we do sometimes get to see it, it’s distorted.”

Elyssa Pollio, a senior mathematics major who attended the event, said Dash’s discussion of her struggles made her reflect on the role of women and people of color in cinema.

“Sometimes I think of how difficult it would be to be the first of something. She also talked about how much adversity she had to deal with in the film industry. Even a white female director has to deal with a lot of stuff,” Pollio said. “I really appreciated hearing her talk.”

Also in attendance was Neepa Majumdar, an associate professor of film and media studies, who said she first encountered the work of the L.A. Rebellion during grad school. She said hearing Burnett and Dash speak made her feel like she “had a front row seat at a moment in cinematic history that [she] had only encountered in the abstract before.”

Majumdar also said the conversation made her reflect on academia’s role in racist systems, which tend to value the work of white artists over that of Black artists.

As the final event of CAAPP’s Black Study Intensive, “Love is the Great Rebellion” closed a week full of conversation about the revolutionary power of art. Martin said she and co-organizer Angie Cruz wanted the week to have a natural flow, from Emily Greenwood’s lecture on Aristotle’s views of slavery to poetry readings and workshops to this final event.

“I’m a poet, and that’s the kind of center of the work we do, is this cross-genre collaboration between poetry and other art forms,” Martin said. “To end on film — these wonderful, historic films by these legendary filmmakers — just seemed to make sense as a kind of punctuation at the end.”