Some student orgs begin to meet in person as pandemic continues 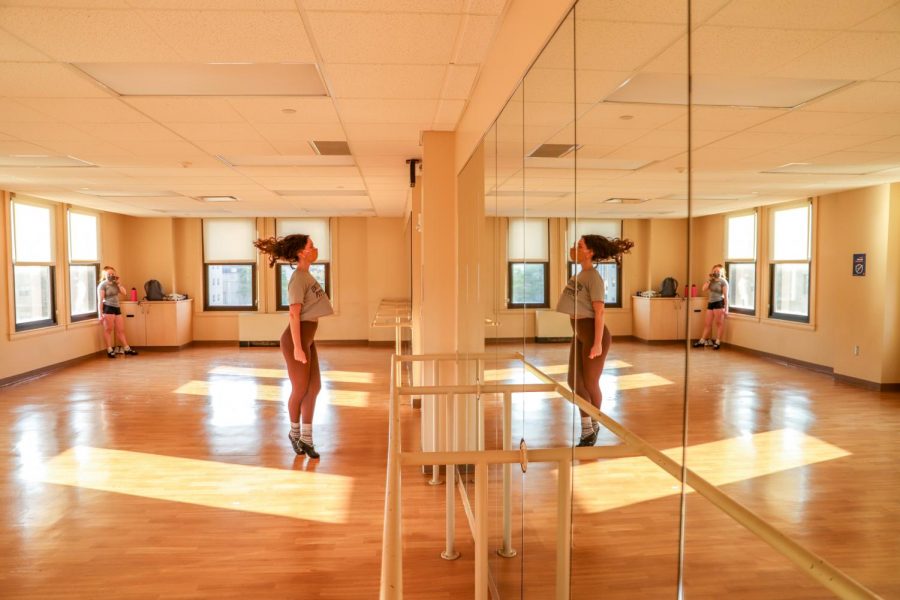 Some Pitt club leaders and members are slowly emerging from behind their Zoom screens to practice their hobbies and interests together in person.

Due to the ongoing COVID-19 pandemic, clubs reimagined and modified their meetings and activities this semester to meet health guidelines, which, for the majority of organizations, has resulted in strictly online meetings. But on Sept. 14, Pitt sent an email to hundreds of student organizations allowing them to apply to hold in-person meetings.

Student Affairs spokesperson Janine Fisher said there were definite factors that determined whether clubs would be granted approval to meet in person.

“Organizations are granted permission for activities that include a detailed health and safety plan, which outlines how the organization will ensure that University and CDC COVID-19 guidelines are being followed,” Fisher said. “In general, these activities must be something that cannot be held virtually.”

Once clubs get approved, Fisher said the rules for meeting in person require following their health and safety plan. Requests for each tabling event, meeting and practice are due at least seven days prior to the activity taking place, and requests for programs and events are due at least 21 days beforehand.

The new rules also require approved clubs to have at least two designated people present to ensure all participants follow the safety protocol. Fisher said in addition to getting authorized by SORC to meet in person, clubs must separately secure a reservation in the meeting location noted on their request form. Organizations that do not follow the rules may be held accountable to the Student Code of Conduct.

Fisher also said clubs are allowed to reapply, but it does not guarantee approval.

Although there are certain conditions to meet in person, it is not impossible to get approved. Mary Grace Mooney, the president of the Pitt Irish dance club, said her club was allowed to meet in person. Mooney, a junior civil engineering major, said the club was offering optional in-person practices for dancers who wanted access to a studio to work on solo choreography.

In order to ensure safety, Mooney said the studio used in the William Pitt Union has floor markings for social distancing and that each dancer must wear masks and wash their hands frequently.

Mooney said she thinks her club could have been accepted for a few reasons.

“I think because we are not practicing group dances in the studio, it makes it possible to meet safely,” Mooney said. “If we had tried to practice our typical group dancing I’m sure we would have been denied, so we adapted and only allow solo practices now.”

Mooney said she was not too concerned about the risks of meeting in person for now, because everyone has been following the safety procedures with no issues.

“There are obviously some risks associated, and I would never want to have a mandatory in-person meeting in case some of our members didn’t feel comfortable attending,” Mooney said. “We only have around three to four members attend each in-person practice anyways, which makes it easier to space out in the studio.”

Pitt has also approved in-person meetings for the Habitat for Humanity club, an affiliate of the nonprofit that provides affordable homes to local, low-income families. Volunteers help build homes alongside Habitat Pittsburgh construction supervisors and other volunteers. Cecelia Hembrough, the club vice president, said Habitat for Humanity applied for approval because the construction projects and volunteer work could not be done remotely.
“Our affiliates are still building, albeit with masks, socially distanced and outside as much as possible,” Hembrough, a senior molecular biology major, said. “They depend on labor from volunteers to be able to finish houses for the families that they provide for.”

Hembrough said the club’s in-person workdays, which often took place outside of Allegheny County before COVID-19, now face more limited work locations. She said the club will take smaller groups to affiliates, spreading out among more vehicles for traveling, working outside exclusively with masks on and quarantining for 14 days after returning from the workday.

Even though they have been granted permission to meet in person, Hembrough said there is a mixed reaction between club members looking forward to getting back to work and those who remain uncomfortable meeting in person.

Hembrough added that she was more concerned about club members getting sick or spreading the virus even further through in-person meetings than anything else. She believed with the restrictions, the chances of this happening are much lower.

“While there are now more steps to go through to get approved for any event or travel, these steps are absolutely worth it to keep any club members who choose to participate as safe as possible,” Hembrough said.

Not every club was officially approved to meet in person yet. Daniel Stumpp, the chief engineer of the rocketry club, said he was given provisional approval to meet in person by the Swanson School of Engineering and is in the process of receiving an answer from SORC. He said there is an essential need for his club to meet in person.
“As a student engineering team competing in NASA’s University Student Launch competition, we design, build and launch high-powered rockets,” Stumpp, a senior electrical engineering major, said. “Therefore, gathering in person is essential for us to be able to build and launch our rocket and successfully continue with the competition.”

Some clubs have applied to meet in person, but Pitt rejected them. Fisher said student organization requests could be denied for not having a detailed enough health and safety plan, if the anticipated group was too large, the activity involved prolonged close contact or if members could virtually accomplish the activity.

Corinne Mammarella, the social event coordinator for Pitt’s Women’s Chorale Ensemble, said although the organization implemented multiple safety measures into its proposal, the group was ultimately rejected to meet for its annual brunch bonding event.

Mammarella, a sophomore studio arts and anthropology major, said the University rejected the club because of the intent of eating during the event.

“Given the circumstances, we requested to meet outside, sit 10 feet away from each other, and bring our own food to eat,” Mammarella said. “Our masks would have only come off to eat, and social distancing would have been required at all times.”

Mammarella also said the ensemble gave several reasons for why members wanted to meet in person.

“Singing as a group takes a tremendous amount of understanding and comfort between members,” Mammarella said. “[Because of wanting new members to get assimilated], we felt that an in-person event, even with safety precautions, would be more impactful than virtual events.”

Mammarella said she believed the event was rightfully denied, in some respects.

“Although I felt that our mentioned safety precautions were sufficient, I understand the cautious mentality of the University,” Mammarella said. “However, I wish that the message I received denying our request had included alternative in-person events/options that would be approved by the University.”

But according to Mammarella, the group plans on reapplying with some changes to the event to better follow safety guidelines.

“We will most likely request permission to follow safety guidelines and simply bond through conversation,” Mammarella said.

Unlike other clubs who have already received their verdict from SORC, the rocketry club is still waiting to hear back. Stumpp said members are excited at the prospect of meeting.

“The general attitude of those members planning to meet in person is excitement,” Stumpp said. “We have a passion for space and rocketry, and we are ready to get back to work.”