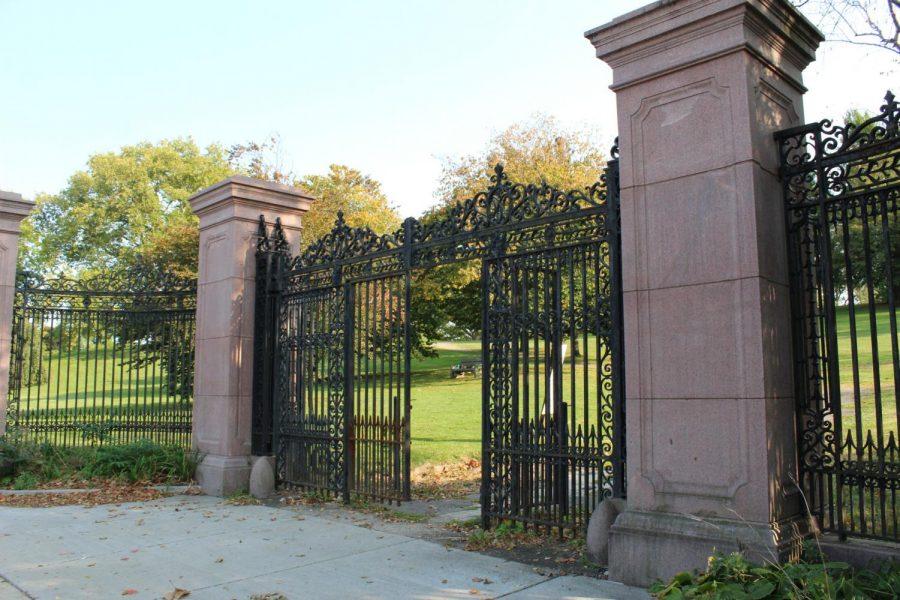 A restless need to explore — or just to have something to do amid a world that felt like it had ground to a halt — had drawn me into the City’s parks during the early days of the pandemic.  When I arrived at Mellon Park the other day, however, I was mentally exhausted by the digital semester’s oddly hectic pace, and I thought then that I couldn’t have come to a better spot.

There is an astounding serenity in that place, although unlike some of the more “wild” City parks like Schenley or Frick, it never allows you to suspend disbelief entirely and pretend that you’ve somehow stepped outside the City. Perhaps it’s because of the continuous drone of the cars careening up and down Fifth Avenue that the green lawns and slopes of Mellon feel the way they do — a point of calm amid the tumult of the world.

Locking my bike onto a no parking sign behind the Phipps Garden Center, I followed the cobblestone road down into the park.

On the grounds of what used to be the estate of philanthropic industrialist R.B. Mellon, Mellon Park consists of gently sloping hills, dispersed trees and two gardens, all encircled by an iron fence.

Paved paths wind their way through Mellon, making it a place for a stroll rather than a hike. The weather was perfectly mild on the day I last visited, and people sat out on the open fields on blankets, laughing with their friends or reading and napping in peace.

Looking for something more akin to the latter, I went straight down the steps towards the Elizabethan Herb Garden — avoiding the wedding party doing photographs in the more prominent Walled Garden.

Entering from above, one descends into the Elizabethan garden by two sets of stairs, passing the first level of ornamental hedges and arriving in a court with brick walls. The garden, or rather, gardens, with whimsical names like “Silver Garden” and “Knot Garden,” each have a different theme.

There is one devoted to native herbs, another to plants with silver leaves and even one for common, but poisonous, specimens. Particularly notable are the Shakespeare Garden and the Rose Garden. In the Shakespeare Garden, every plant is a species referenced in one of the Bard’s works, and in the garden’s center a bust of Shakespeare contemplates what appeared to my admittedly untrained eye to be a potato plant (“Let the sky rain potatoes” – “The Merry Wives of Windsor,” Act V, Scene V).

Prettier, if less academic, is the Rose Garden, which sits beneath a crumbling sundial. The garden houses heirloom roses, at least one variety of which dates back to the late Middle Ages.

Leaving the lower entrance to the Elizabethan garden, you can double back along the paths, climbing the hill until you have returned to the Walled Garden. This garden stands enfolded by walls on three sides, but lies conveniently open facing the main field.

At the back of the garden stands a multi-tiered fountain decorated with fish and turtle-headed spouts and statues of children and animals (the animal statues are fine enough, but I’ve always found the pupil-less eyes of the children unnerving at best). The majority of the garden’s vibrant flowers grow along its periphery, beside the paths that follow the course of the walls.

What interested me more than the fountain and flowers during my visit, however, was the open lawn at the garden’s center. When the wedding party and their photographers had dispersed, I walked on to it. Scores of black medallions, each with the name of a star on it and an unlit bulb in its center, were set into the ground.

I walked across the grass, and found a place to sit on a bench on top of a hillock near the front of the garden. On the ground beside the bench lies a plaque studded with rivets which mirror the placement of the unobtrusive bulbs down on the lawn. I checked the time — not too long before sundown.

While Mellon Park doesn’t have the same “outdoors” feel that I’ve sought in the other parks I’ve frequented since the start of the pandemic, it is a fine place to pause for a moment and rest.

For many, the outdoor spaces in Pittsburgh have become even more important as a social environment — a place to gather safely and walk or picnic (and I’m very curious, apprehensive even, to see how this will change as the weather gets colder). On this occasion though, I was happy for the solitude, and discovered the best thing about Mellon Park — it’s a damn good place to sit and think.

While waiting for the sun to set, I reflected on the nature of the peacefulness in that park. It’s an obviously unnatural environment, engineered for human use no less than any part of the urban and suburban spaces that adjoin it. Still, it stands out from its surroundings, and is welcoming to other forms of life beyond us — as evidenced by the rabbits that ran across the now-empty lawns as evening fell.

Is it any more artificial than, say, Schenley Park, which for all its comparative wildness is undergoing human-driven restoration? In any case, Schenley is no less neatly circumscribed by the surrounding neighborhoods than Mellon is, confined as it is to the hilltops and hollows.

Sitting undisturbed on my stone bench in the Walled Garden, my thoughts also turned to the physical and chemical violence used against protestors by police in late August at the edge of Mellon. “Corralled” and apparently kettled, and with that in mind the park’s iron fences and even the aesthetic garden walls took on a more ambivalent symbolic place in my thoughts. Was the notion of sanctuary and safety always a mere step away from restriction and oppression? Were they even as far as one step away from each other?

It was some time after the onset of night, but at last the multitude of lights set into the lawn were illuminated, flickering like the stars in the sky. I wandered through them as I left the park, having found what I had planned to see that day.