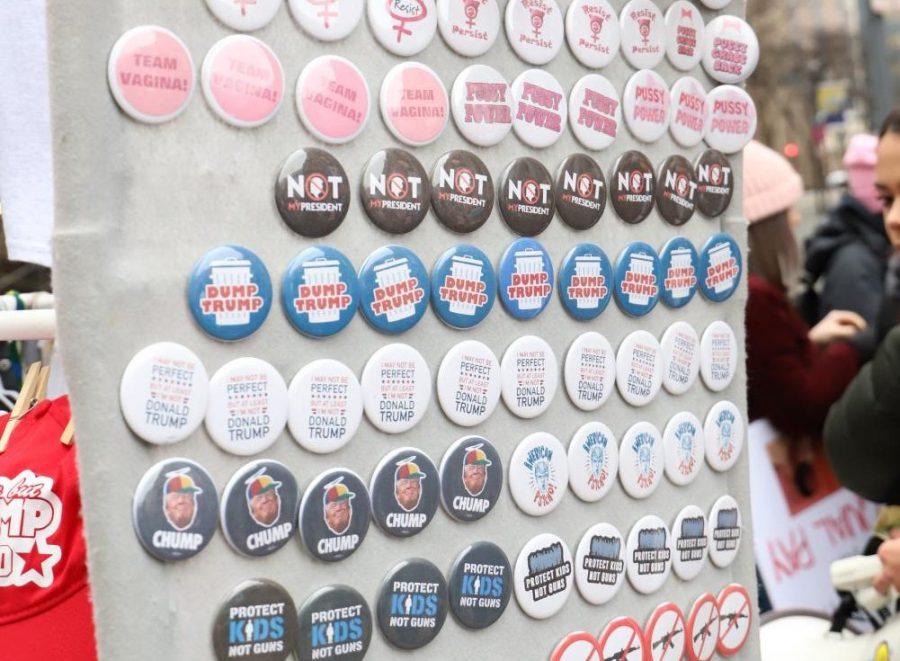 Magnets and buttons for sale are displayed at the 2019 Pittsburgh Womens’ March.

During the Vice Presidential Debate on Wednesday night, a third party got some screen time on the debate stage. A fly, which landed on Vice President Mike Pence’s head, got two minutes and three seconds of air time, according to NBC news reporter Ian Cull.

The fly immediately went viral on Twitter, and soon after, TikTok. At 10:33 p.m. Wednesday night, the Biden campaign tweeted a photo of Joe Biden holding a fly swatter behind the scenes of Harris’s debate stage.

“Pitch in $5 to help this campaign fly,” the tweet reads.

The Biden campaign — as of Thursday — is now selling fly merchandise, including a blue fly swatter which includes the text “truth over flies.” Over 35,000 fly swatters were sold in the first three hours after the product was released.

While all of this may certainly be funny, it raises a concerning issue that has been appearing more and more frequently — the commodification of activism. When we turn to capitalism, and start selling goods with funny taglines, it distracts from larger issues of politics and justice that need to be recognized and advocated for.

Politico ran a story shortly after the debate with the headline, “Fly becomes breakout star of the debate.” Likewise, other news outlets seemed to capitalize on the fly first and foremost.

“The most memorable part of the #vpdebate wasn’t a quip or a facial expression,” the Los Angeles Times wrote on Twitter. “It was when ‘the fly’ landed on Vice President Pence’s head and remained for just over 2 minutes — the same time alloted to the candidates for each question.”

But focusing on the fly takes away from conversation around important discussions at the debate — such as the Trump administration’s response to the pandemic, as well as other issues like climate change and taxes. The merchandise and memes don’t do much to move these issues forward, and nor do they spread awareness or enact change.

Originally meant to be a call to action, the phrase went viral on TikTok, Twitter and other social media platforms. A person would do something seemingly casual, and then add that we should “arrest the cops who killed Breonna Taylor.” One of the memes, for example was a graphic that reminded people to drink water, get sleep and arrest the cops who killed Breonna Taylor. T-shirts with similar sayings were also mass-produced.

But turning the call to action into a meme desensitizes and normalizes the phrase entirely — distracting from the Black Lives Matter movement and police violence.

“Breonna Taylor is not a meme, and neither is her death,” one Twitter user wrote. “She is a Black woman with a life and a story and a personality and loved ones. Please consider this before your next quirky post or retweet.”

All of this is to say that if we want to enact change, we can’t commodify activism. We can’t turn to memes and T-shirts for justice, or fly swatters for political change.