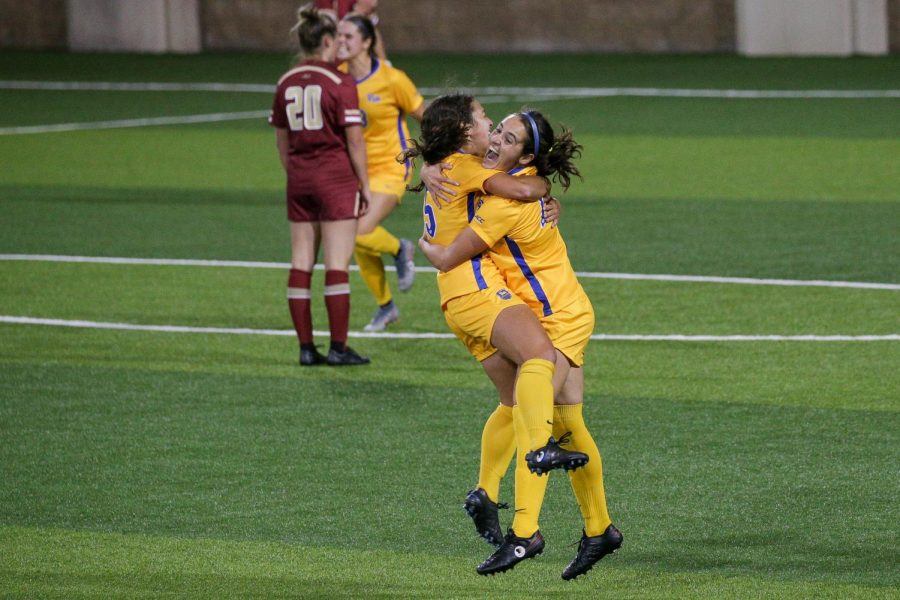 The Pitt women’s soccer team started off its four-game homestand with a 4-3 victory against the Boston College Eagles, snapping a two-game losing streak.

The Panthers came back from a five-game road trip, where they defeated Navy in OT and swept the two matches against The Citadel, but dropped their next two matches against No. 10 Virginia and unranked Virginia Tech. Pitt associate head coach Ben Waldrum realized the importance of being the home team. And coming off a two-game skid, this was a must-win match in the eyes of Waldrum.

“After that long stretch, to come back in [and] get settled, it was big for us. It was important for us,” Waldrum said. “The disappointment from last Sunday with Virginia Tech, it was very important for us to get off [to] a good start.”

This was only Pitt’s second home match of the season and their first in three weeks. The atmosphere was similar, but this time around, there were parents in the stands. Seats in the bleachers were marked off, so that families could sit together, while remaining socially distant from other families. There were only about nine different families at the stadium. Waldrum appreciated seeing Panther supporters in attendance.

“It gets you in the mindset that things can return to normal,” Waldrum said.

Tom and Jackie Knych — the parents of Pitt first-year midfielder Hannah Knych — came all the way from Syracuse, NY. They jumped at the opportunity to finally attend one of their daughter’s games.

The action started almost right away, when junior defender Hailey Davidson blocked a Boston College shot from the 18-yard box in the second minute. The Eagles committed a foul that led to a penalty kick four minutes later.

Sophomore forward and leading scorer Amanda West buried her attempt from the penalty spot for her eighth goal of the season, giving the Panthers an early 1-0 lead.

Boston College responded in the 10th minute. Pitt junior goalkeeper Katherine Robinson came out for a ball in the air, but it deflected away from her and BC’s sophomore midfielder Sam Smith put it in the back of the empty net to tie the match at one.

The Eagles struck again moments later. Smith tried for her second goal of the match off a corner kick, but her shot deflected off of her teammate, senior defender Mia Karras. It didn’t matter, because the ball went in anyway, giving the Eagles a 2-1 lead.

Pitt saw a lot of chances in the opposing half of the field throughout the rest of the period, but they could not convert. Refs whistled down multiple chances for offsides, and the half ended with the Eagles up 2-1.

Pitt cranked up the intensity in the second half. After a scramble outside of the Pitt net resulted in no goals, the Panthers put the pressure on the Eagles defense. West struck again in the 55th minute. She worked her way around the BC defender and put one past their keeper outside the 6-yard box, tying the match at two. It was her second goal of the match, and her ninth in as many games.

Panthers first-year midfielder Emily Yaple got tripped up by BC sophomore midfielder Samantha Agresti less than five minutes later. On the ensuing free kick, she made good contact and drove it home. Her second goal of the season gave the Panthers a 3-2 lead.

But it wouldn’t be long before BC found the equalizer. Eagles’ forward Jenna Bike, their only graduate student, deflected her shot off the post and past Robinson in the 73rd minute, tying the game at three.

Pitt junior forward Anna Rico got the ball in the opposing half mere seconds later and on her left foot. She let the ball fly from just outside the penalty box and into the upper left corner of the goal. That beautiful goal would become the game winner. Pitt kept BC off the scoresheet for the rest of the night — winning the match 4-3.

Rico said her teammates’ grit and composure on both sides of the ball earned them the victory.

“We had four goals from three players, so that shows we can have a lot of people score,” Rico said. “And our back four really solidified and didn’t let many shots in.”

Although happy to come away with a win, West said the Panthers must step up earlier in games from here on out.

“We shouldn’t be taking 15 to 20 minutes to get used to things before we start really playing,” West said.

The Panthers return to their home pitch on Sunday for a rematch against the Navy Midshipmen.