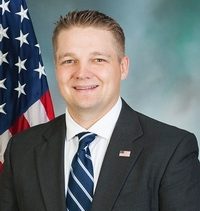 Pitt adjunct professor Aaron Bernstine has served as representative for the state House 10th District for the past two terms and most recently served on the House Commerce, Insurance, Health and Game and Fisheries committees.

Aaron Bernstine, an adjunct professor in the graduate school of business and local state representative, is being pressured to resign his House seat after four Snapchat videos from over the summer surfaced of him encouraging his 5-year old son to smoke a cigar and use explicit language.

University spokesperson Pat McMahon said the video’s contents don’t match Pitt’s values, but didn’t say whether or not the University was taking any action in regards to Bernstine’s employment status.

“While we do not comment on personnel matters, the content of the videos does not align with our core values,” McMahon said.

On his now-deleted Snapchat account, Bernstine (R-Beaver/Butler/Lawrence) offered a cigar to his son, and when he takes a puff, Bernstine tells him to “hit it harder” and “breathe in,” according to the Beaver County Times. In another video Bernstine is heard off camera asking his son “What are we going to chase in Nashville?” His son then whispers, “Cadillac p—-,” using a vulgar word for vagina.

Another video with Bernstine’s voice in the background showed him trying to convince an unidentified older boy to play the F—, Marry, Kill game — which typically offers up three people’s names, and players have to pick one for each action.

Bernstine posted an apology to Twitter Thursday afternoon. He said the videos were taken during a private vacation with friends and said they were “jokes that went way too far.” He said he “has to do better as a role model for his child.”

Bernstine is up for reelection in November for his third two-year term in the 10th Legislative District, which covers parts of Beaver, Lawrence and Butler counties. He faces two challengers, Beaver Falls Democrat Kolbe Cole and independent candidate Johnathan Peffer of Franklin Township, who is running under the United Party banner.

These videos prompted members of Bernstine’s own party to call for his resignation. The House GOP released a statement on Thursday saying they were “disgusted” by Bernstine’s actions.

“As parents and fellow legislators, we are disgusted by Rep. Bernstine’s conduct,” the statement said. “In order to take the time necessary to focus on his family and repair his relationships, we call on Rep. Bernstine to immediately resign.”

“The people deserve to know the men and women they send to Harrisburg will behave in a manner worthy of the public’s trust,” the statement said. “As more and more of Representative Bernstine’s alleged inappropriate behavior around his children and the children of others comes to light, we share the disappointment and disgust of the Republican leaders and urge Representative Bernstine to do the right thing and heed the call of his party’s leaders.”

Bernstine added that although he will work to “gain” voters’ trust, members of both parties might take advantage of the “situation.”

“Over the next 26 days before the election there’s going to be a lot of other things that people try to put out, some of them true, some of them manipulated and some of them just downright false,” Bernstine said. “Now the party bosses of both sides are going to try to take advantage of this situation.”

This isn’t the first time Bernstine has been in hot water due to social media posts, though. When protestors shut down St. Louis, MO, streets after an ex-cop was acquitted in 2017 of murder charges in the shooting of a Black motorist, Bernstine tweeted a message toward protestors.

“If anyone EVER tries to stop my car on a highway with negative intentions … I will not stop under any conditions,” he said.

Bernstine tweeted a similar opinion in 2013 as demonstrations took place over the death of Trayvon Martin. He said he’d “def not stop [his] car!” for protesters shutting down highway traffic.

At the time of the controversy, Joe Miksch, a University spokesperson in 2017, said Pitt respected Bernstine’s right to free speech.

“The University supports free speech and expression and an educational environment in which these rights are respected and people of all views can participate in civil discourse,” Miksch said.