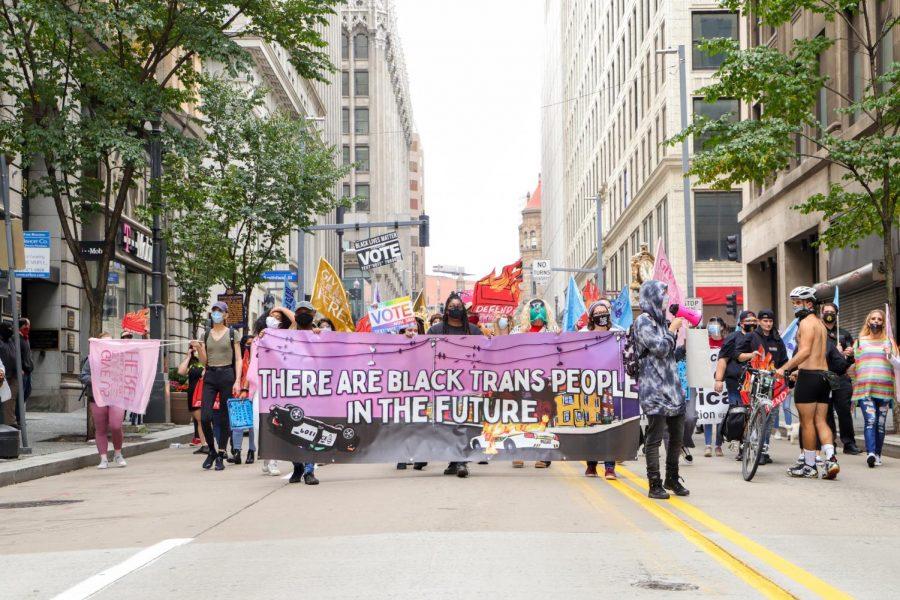 Around 50 people donning rainbow attire and flags that said “Give us our roses while we’re still here” marched across Pittsburgh on Sunday as part of People’s Pride. They could be heard chanting “Black trans lives are under attack. What do we do? Stand up, fight back,” to the beat of a drum.

This march, postponed from the summer, was part of the three-day “People’s Pride PGH 2020: Black Trans Lives Matter Too” pride festival hosted by SisTersPGH — a local transgender community center. The demonstration focused on advocating for Black trans rights in Pittsburgh and police reforms to better protect the LGBT+ community.

The march started at Freedom Corner in the Hill District, went into Downtown and crossed the 7th Street Bridge, also known as the Andy Warhol Bridge, to the North Side. About 50 people marched and about a dozen vehicles joined in the front and back. The trucks leading the parade were decorated with quotes from transgender activists Sylvia Rivera and Marsha P. Johnson and colorful artwork around the theme “our love is ceremony” and “our rage is ceremony.”

People’s Pride is the only pride festival in Pittsburgh this year, following the dissolution of the Delta Foundation of Pittsburgh in late August. Delta was known for its annual Pittsburgh Pride celebration in Downtown. Martin Healey, Delta’s board president, said the postponement of Pittsburgh Pride due to the COVID-19 pandemic and questions of whether the event could be held in 2021 left the nonprofit with no revenue stream.

Delta was involved in a number of controversies during its 24-year history. Former board president Gary Van Horn resigned in January after he was arrested on multiple charges, including impersonating emergency responders. The group has also faced sharp criticism from members of the Black transgender community who said the organization wasn’t inclusive of all members of Pittsburgh’s LGBT+ community.

Ciora Thomas, the founder and president of SisTersPGH, said Black trans people knew for a long time that Delta was problematic. Black trans rights activists held an August protest on the South Side outside the offices of a company owned by Healey, calling for the foundation to cease operations.

Thomas added that now is time to move on to a new, better day in Pittsburgh’s pride festivities with People’s Pride.

Deepshikha Sharma, a 26-year-old Bloomfield resident and 2015 Pitt graduate, said it was important for her as a member of the South Asian community to support the Black community at the demonstration.

“It was super important for me to come out to support my Black siblings, especially as a South Asian I want to be there in solidarity for this community because they are also my community,” Sharma said. “It’s important that I put my body here in support of everyone.”

Sharma said showing up to events like these is something all students should do, as well.

“It’s super important for students who may have more time and resources that people who are working may not,” Sharma said. “When students show up, having the bodies there is a good thing so we can stand in solidarity.”

Thomas said many of SisTersPGH’s initiatives focus on nurturing transgender and nonbinary leaders in Pittsburgh. Thomas said she hopes to pass on her leadership to younger people.

“We want to empower our youth to lead, our youth to be in spaces that are authentically built for them and they see people who look like them,” Thomas said. “They are our future. I’m ready to continue activating our young trans and nonbinary community members so that I can sit down and rest.”

One of these young leaders is Jaqob Harris, a 22-year-old Bloomfield resident. Harris said ze hopes the momentum the Black Lives Matter movement got over the summer continues, although incidences of violence and oppression against Black people and transgender people aren’t new.

“Black trans people, Black trans women have been oppressed for way too f—ing long, and that’s just a reality of our life. The kind of stuff we’ve seen on the news for the past couple months, isn’t new,” Harris said. “The only difference between then and now is we’ve been locked in our rooms for the last eight months, and we had to see it.”

Harris added that while ze thinks People’s Pride was “amazing,” there is still a long way to go to achieve equity in Pittsburgh and the country.

“There’s a lot of people around the country who are telling us to sit down, shut up and are trying to put things in place to placate us so we get a sense of satisfaction for a little bit then we’re done, it’s not going to happen,” Harris said. “Whatever happens after the election, it doesn’t stop there. Our work isn’t ever going to be done.”

Satvika Neti, a graduate student in the Heinz College of Information Systems and Public Policy at Carnegie Mellon University, said People’s Pride is the intersectional approach she’s always wanted from pride and is happy it continued despite the coronavirus pandemic.

“This is the People’s Pride, this is the intersectional approach we’ve always wanted for pride,” Neti said. “The fact that they’re able to do it despite the pandemic, and do it safely and do it well and so beautifully with all the artwork is amazing.”

Neti added that for students like herself, it’s important to remember that they are still a part of the Pittsburgh community while they’re in the City.

“Things that happen here affect [students] as well, even though we are kind of sequestered in an Oakland bubble,” Neti said. “It’s important to show up for the community because they have consistently and constantly shown up for us.”