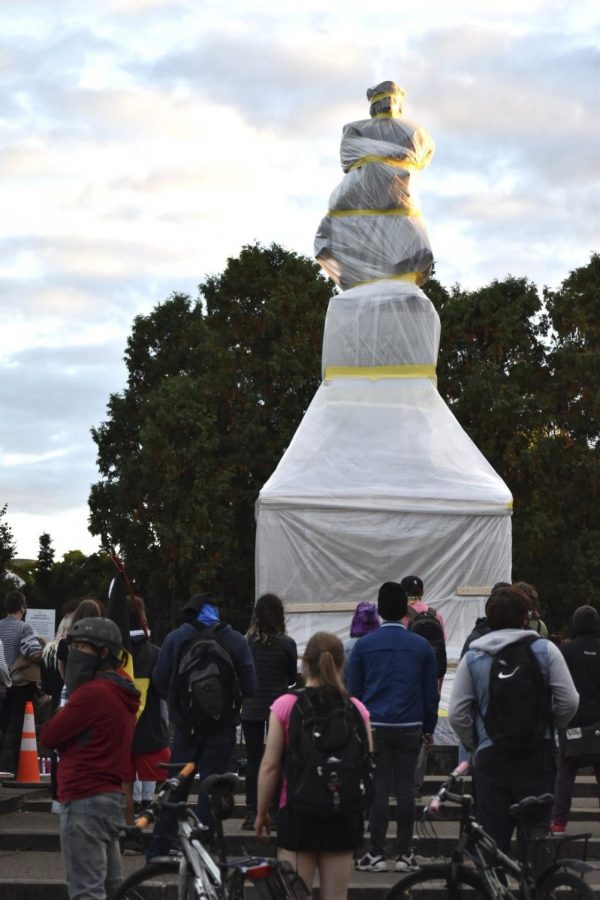 As a child, Miguel Sague III often walked by the Christopher Columbus statue near Phipps Conservatory and wondered why a man who killed his ancestors had a monument. Sague, who was born and raised in Pittsburgh, is a member of the Taíno people — the first Indigenous group who Columbus encountered on his expedition in 1492.

“Walking past the statue of a mass murderer being celebrated there, in the middle of the city that I live in — that was disturbing to me as a child,” Sague said. “Meanwhile, the rebels who fought against him don’t have statues. Nobody knows who they are.”

But this Indigenous Peoples’ Day, he had something to look forward to. Mayor Bill Peduto recommended last Friday that the Columbus statue, located on Schenley Drive on the outskirts of Pitt’s Oakland campus, be removed. Peduto said in a statement that he favored returning the statue to the Italian-American community, where it can be preserved in a manner that “celebrates Italian-American culture, while acknowledging the wreckage that slavery and racism has done to America.” He was criticized for focusing on the feelings of Italians, rather than those of Indigenous people.

The process to remove the Columbus statue began in September 2019, when Prem Rajgopal, now a recent Pitt graduate, reached out to Pittsburgh’s Art Commission, which ultimately voted unanimously on Sept. 23 to remove the statue.

The process was a long one, Rajgopal said.

“I went to their meeting in September. I got an old professor from undergrad to write a statement about Columbus,” Rajgopal said. “After that, they were a little bit receptive, but kind of blew me off. The Art Commission was hesitant to take any steps without there being mayoral support.”

It wasn’t until a petition — which now has almost 16,000 signatures — spread online that the movement started to pick up speed. Rajgopal connected with Pitt’s Native American Student Organization, who then got him in contact with the Council of Three Rivers American Indian Center, as well as Sague and his father.

“After it blew up, we kinda realized, ‘Hey, we can actually do this,’” Rajgopal said.

For Sague, the statue’s removal has been a long time coming.

“It’s a feeling of some amount of vindication,” Sague said. “They used to say, ‘There are no more Taínos, the Taínos are extinct.’ And Taínos, such as myself and my father, have spent our whole life creating a movement — the Taíno Resurgence Movement — in which people of Taíno ancestry stand up and interact to try and recover our culture and our history and our sense of identity after the cataclysm that is Christopher Columbus and the colonists.”

But the movement to remove the statue has been met with backlash. The monument, which has been in place since 1958, is an important landmark to many in Pittsburgh’s Italian-American community. Columbus was born in Genoa, Italy, but ultimately flew the Spanish flag during his 1492 expedition. The Italian Sons and Daughters of America filed a lawsuit last Thursday in the Allegheny County Court of Common Pleas asking for a halt to the statue’s removal, which a judge granted on a temporary basis.

Sague said he has received a death threat from defenders of the statue.

“I was surprised that so many members of the Italian community found that it was important to celebrate this murderer as part of their own history when he really has nothing to do with Italian-American history,” Sague said. “I understand that when Italians started arriving here, they needed a historical champion because they were being oppressed. But now it seems to be a matter of habit. His statue doesn’t belong there. His statue defiles their legacy.”

Protesters gathered Monday evening for a rally at the statue, which is currently wrapped in a tarp to protect it from vandalism. They demanded the statue come down immediately.

Emmanuel Todd-Braka, a senior at nearby Penn Hills High School, drove to Oakland to join the rally Monday night.

“This has been going on too long. It needs to come down,” Todd-Braka said. “As an Indigenous person, our resistance is our existence. Without resisting, we wouldn’t be here. We’ve been resisting over 500 years. It’s just another symbol of our oppression.”

About 30 people at the rally began to paint on the covered statue, but were eventually forced away by the police.

Rajgopal said he understands why many Italians in Pittsburgh are upset with the statue’s removal but believes the community will be better off without it.

“As I got more educated on Columbus Day itself, and what it means to the Italian-American community,” Rajgopal said, “I see it as something where I hope we can move forward in a constructive way that acknowledges the oppressions that Italian-Americans have faced but also acknowledges that Columbus isn’t someone who should be revered and by putting him on a pedestal, you’re bringing down other people.”

“That’s not the way that I see Italians,” Sague said. “I don’t think that’s the way Pittsburgh should portray Italians. Christopher did all that in the name of Spain anyway. I think it’s a benefit to Italians to choose a better spokesperson.”

Sague added that he thinks the statue should be replaced by one of a different Italian from Pittsburgh.

“I would love to see a nice big statue of another Italian hero,” Sague said. “I hope something that Italians can rightfully be proud of goes up in that space. Each Columbus monument that is brought down is a relief that really can’t be described in words to anyone to doesn’t know the feeling of having this holocaust in their history and having the perpetrator glorified.”

Sague said Columbus Day used to be an extremely sad day for him, but the change to Indigenous Peoples’ Day and the statue’s impending removal are signs of good to come.

“Indigenous Peoples’ Day, to me, represents my family,” Sague said. “My hope for the future is that Pittsburgh continues becoming better, more open and more of what it is already becoming.”