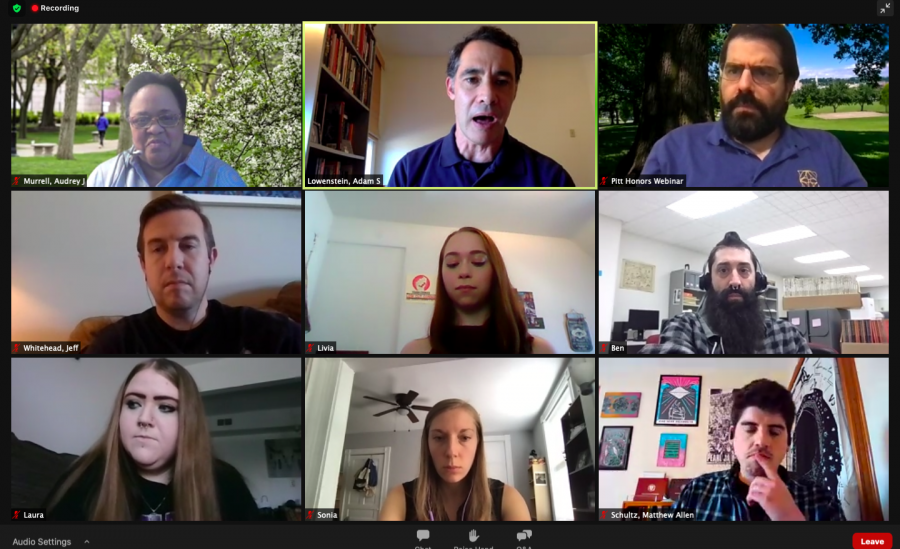 Panelists discussed the George A. Romero archive, which is now fully open to the public, and the resources students can use on Oct. 9.

“Tales From the Hood,” a 1995 horror anthology film, opens its first story with a Black police officer who arrives at the scene where white officers have pulled over and attacked a Black politician. After stopping them, the officer’s partner tells him, “Those ‘assholes’ are cops. Who the f— are you to judge ‘em?”

This scene is still meaningful 25 years later. It’s one example of how the horror genre can serve as a social force, a subject the University Honors College wants to help students study.

The Honors College is holding several events throughout the rest of the semester to celebrate its new “Horror Genre as a Social Force” scholar community. The community is a collaboration with organizations both within and outside the University, including the George A. Romero foundation, the University Library System’s George A. Romero collection and horror studies archive and the Horror Studies Working Group.

According to Everett Herman, the director of speaking and faculty engagement for the Honors College, the main goal of this and other scholar communities is to allow students to work with other students and faculty interested in solving similar issues. Members work on research projects, collaborate with local nonprofits and participate in community events.

“The scholar communities are based off of this model in higher education that are called ‘communities of practice,’ which basically involve collaborative interdisciplinary people who share the same interests revolving around an issue,” Herman said.

Herman said the “Horror Genre as a Social Force” community specifically came about to utilize the George A. Romero collection, which the University acquired in May 2019.

“One of the avenues that we wanted to pursue is certainly the arts, and there’s this incredible opportunity associated with the Hillman Library, it’s the George A. Romero archival collection,” Herman said.

Ben Rubin, an archivist with the University Library System and curator of the collection, said the archive’s role is to support students interested in doing research on the production of horror films.

“We want faculty and students that are interested in that to be able to then have that place to gather,” Rubin said. “Then on the library side, our goal and our involvement is to be able to provide those resources that will allow scholarship in that area.”

The Romero collection is a part of Pitt’s larger Horror Studies archive, which includes collections and materials from John Russo, a collaborator of Romero’s, archives from the production “Cryptic Pictures,” the Daniel Kraus papers and more materials that they are working on acquiring. Rubin said the University is hoping to build a diverse archive beyond the well-known staples of the horror genre.

“We’re not just limited to sort of the usual like Stephen King and Dean Koon stuff,” Rubin said. “We’ve got more, with a specific eye to try and diversify the holdings and specifically seeking out horror that’s been created by underrepresented voices.”

Rubin and Herman joined with other faculty members such as Audrey Murrell, the dean of the Honors College, and Adam Lowenstein, a film and media studies professor and the head of Pitt’s Horror Studies Working Group, last Friday to host an information session for the scholar community.

During the info session, the panelists discussed the Romero archive and what resources students could use. While the collection is not fully open to the public and, due to the pandemic, an official opening date is not clear, Rubin said the staff is willing to work with students to find any resources they need.

There were several other guests at the panel who discussed future plans and hopes for the scholar community, as well as upcoming events. One guest was Sonia Lupher, a visiting lecturer in the film and media studies department, who talked about the Final Girls Berlin Film Festival. Lupher, who is the organizer of the event, said curators and directors of the films being showcased will join the Honors College for a Q&A session on Nov. 9.

The Honors College also hosted an event Tuesday with Kraus, author of the new book “The Living Dead,” a posthumous collaboration with Romero. Kraus has authored fiction for all ages and has worked with the likes of Guillermo del Toro.

The moderators, Rubin and Adam Hart, a visiting lecturer at Pitt, asked Kraus some of their own questions as well as audience questions. Kraus discussed his process of meeting with Romero’s wife and manager, Suzanne Romero, and making use of the archive to complete “The Living Dead,” an unfinished manuscript of Romero’s.

Kraus also talked about the papers he donated to the archive, which include draft versions of his early books and works such as a “Nightmare on Elm Street” fan fiction.

According to Kraus, horror as a genre is capable of leading to social change because it’s on the edges of society.

“The horror genre is a quintessentially fringe genre, and I think changes in society always happen at the fringe first and then work inwards,” Kraus said. “So horror is of all genres, is the one that’s most likely to lead when it comes to social change.”

“His movies always felt like predictions from the future. He always dealt with issues seemingly years before anyone else did,” Kraus said. “He was a real bellwether of what issues America would be dealing with next.”

Livia Rappaport, a junior majoring in film and media studies working with the scholar community, is doing research comparing “Night of the Living Dead” with Rusty Cundieff’s “Tales From the Hood.” Rappaport said she chose to focus on those films because of their connection to Pittsburgh.

“‘Night of the Living Dead’ of course is filmed in Pittsburgh, and George A. Romero filmed all his things in Pittsburgh, and Rusty Cundieff is also from Pittsburgh. We felt very connected to this topic and to these films in particular,” Rappaport said.

“I think it’s that horror kind of gives you a way to talk about topics without kind of explicitly having to represent them exactly how they are in real life. It gives you a little bit more freedom,” Rappaport said.

There will be more events throughout the rest of the semester, including a special panel on Oct. 17 in honor of the 25th Anniversary of the horror anthology film “Tales From the Hood.” There will be a screening of the film and a Q&A session with Cundieff, the film’s director and a Pittsburgh native.

The event was developed in conjunction with Rappaport’s research on the social impact of “Tales of the Hood” and “Night of the Living Dead.”

Going into the spring semester, the Honors College hopes to have more events. Herman said the focus of the community will shift from semester to semester.

“While the fall semester we’re focused a little bit more on race, during the spring semester we’re going to be focusing on gender,” Herman said. “We hope to carve up different areas to focus on thematically semester to semester.”