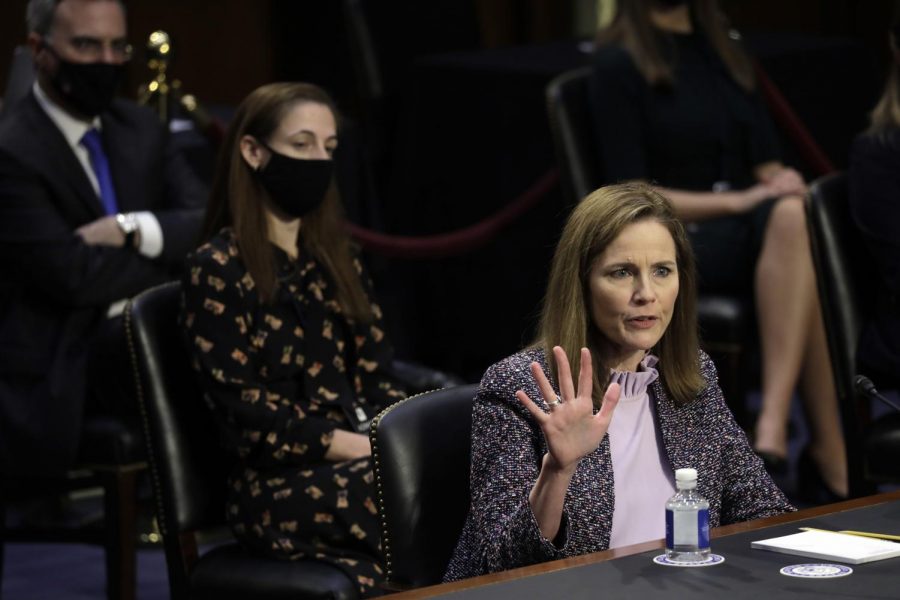 In the wake of Justice Ruth Bader Ginsburg’s death last month, Republicans have rushed to nominate and confirm a conservative Supreme Court justice — the nominee being Barrett. Because election day is so soon — and the possibility of a Democratic victory would essentially eliminate any chance of replacing Judge Ginsburg with a conservative — this process is happening much faster than usual.

Barrett’s values are problematic for many reasons, and many of them don’t align with the majority of America. But what’s been equally disconcerting is the care-free attitude she seems to be taking as the hearings proceed. All of this suggests she’s unfit for the highest court in the country.

In terms of abortion, Barrett has said that she supports overturning Roe v. Wade. She may provide the vote needed to overturn the ruling on the Supreme Court. In reality, though, only about one in three Americans support overturning this ruling. She’s also faltered on the subject of gay marriage and whether or not she supports overturning Obergefell v. Hodges. At the hearing, she did say that she would never discriminate on the basis of “sexual preference,” but declined to specify any further stance. Democrats condemned her use of “sexual preference” to talk about someone’s sexuality, which Sen. Mazie Hirono said implies that someone’s sexuality is a choice. Barrett later apologized, saying this wasn’t her intention. It’s notable that more than 60% of Americans — more than half the population — support same-sex marriage.

When Sen. Kamala Harris, D-Calif.., asked Barrett “is climate change happening?” Barrett responded that she would not answer because “it is contentious.” But according to a recent Pew Research Center poll, 65% of Americans want the federal government to do more to address climate change, and 80% favor tougher restrictions on power-plant emissions. This can’t happen if leaders don’t fully address that climate change is real.

Many Americans also fear they’ll lose the Affordable Care Act if Barrett is confirmed, which could cause 21 million Americans to lose their health insurance. Most polls show that a majority of Americans want the Affordable Care Act to remain in place, but in 2012, the Supreme Court upheld it by only one vote, with Ginsburg in the majority. This means that if Barrett is confirmed, she could be the swing vote. Barrett has previously criticized the 2012 ruling.

But it’s true that many of her views and much of her voting record was to be expected, being that she’s a conservative nominee. But in many ways, Barrett has just seemed vastly unprepared for the hearings.

As Sen. John Cornyn, R-Texas, started to question Barrett, he asked her to hold up the notebook sitting in front of her. The notebook was blank. He noted most senators had multiple books and notebooks to reference, in effort to exemplify Barrett’s intelligence — and it’s true that she did cite various judges, laws and cases from memory.

This might have been somewhat impressive had she not faltered upon being asked to to name the five freedoms granted in the First Amendment. Sen. Ben Sasse, R-Neb., asked on Wednesday if Barrett could name the five freedoms, but she named only speech, religion, press and assembly. Sasse had to remind her of the right to protest. Both sides of the political spectrum should be in agreement that someone incapable of naming the five freedoms isn’t fit for the highest court in the nation.

Even if she had been able to name the five freedoms, and everything else off of the top of her head, her lack of notes still signals that she’s not taking the hearings as seriously as she should. Instead she’s coming in with an attitude that she’ll be confirmed regardless.

This is probably true, unfortunately, but it doesn’t mean that she should flaunt her unpreparedness. Her views are dangerous, and her inability to name the five freedoms — a basic tenet of the constitution — shows that she’s far from qualified.