Men’s basketball returners eagerly prepare for a season in limbo 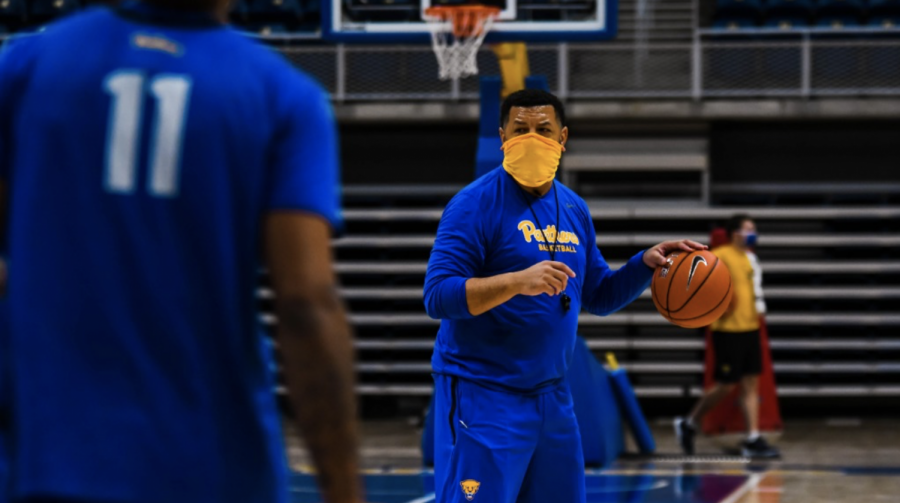 The Pitt men’s basketball team returned to the Petersen Events Center Wednesday for their first official practice of the 2020 season.

The last time we saw head coach Jeff Capel’s Pitt Panthers, they had closed a lackluster season with a deflating, double-digit loss to NC State in the second round of the ACC Tournament.

Since then, the Pitt program and the world have changed dramatically. Guards Trey McGowens, the team’s second leading scorer, and Ryan Murphy, the Panthers’ best threat from beyond the arc, have since transferred. The COVID-19 pandemic, still in its infancy in March, continues to derail school and sporting events. And the protests that swept the nation this summer after the killing of George Floyd by Minneapolis police continue to take center stage in national politics.

After an offseason dominated by everything but basketball, Wednesday’s practice offered comfort. The Panthers took the floor for the first time in an official capacity this season on Wednesday with coaches clad in masks and gloves as they conducted drills.

A return to the Petersen Events Center provided one thing that has been in short supply — certainty. Despite not knowing what its schedule will look like, who will be in the stands when the team plays or simply who will play in some circumstances, we can be certain that Pitt practiced Wednesday.

We can be certain that a group of 13 players, dressed in blue and gold pinnies, played basketball today in preparation for a season the Panthers intend on playing and games they intend on winning. At least that’s what junior forward Au’Diese Toney has planned.

“I want to win,” Toney said on Wednesday. “I want all of us to shine bright so we can make it to the [NCAA] Tournament.”

It’s a lofty goal, but Toney, who is poised to take on an outsized role after demonstrating a more well-rounded skill set toward the close of last season, said he feels this Pitt team is better equipped to do it than any he had been on before.

Alongside junior guard Xavier Johnson and sophomore forward Justin Champagnie, Toney helps make up the bulk of Pitt’s returning scoring, rebounding and assisting. But that trio is expected to lead emotionally as well.

Johnson’s one of the “old” guys on this roster. As the least acclaimed of Capel’s first recruiting class at Pitt, Johnson came to Pitt with few expectations. But after landing on the ACC All-Freshman team in his first season as a Panther, Johnson’s expectations skyrocketed and he let it affect his play.

But this offseason he refocused and is ready to make the leap from point guard to floor general.

“I’m not going to lie, I learned how to trust my teammates more,” Johnson said. “Last year, I was really stuck on myself a lot. I was thinking about going to the next level. This year, I’m just going to keep my head down and stay grounded.”

Johnson has been through the fire. He created expectations, fell short of them in his sophomore season and is now tasked with helping Champagnie navigate a similar journey. Rated as a three-star recruit by 247Sports, Champagnie was seen as a solid but relatively unspectacular prospect.

But as the season progressed, the 6-foot-5 slasher became one of the Panthers’ few consistent offensive weapons. Highlighted by a pair of 30-point outings against Georgia Tech and Wake Forest, Champagnie’s strong first year in Oakland means he’s no longer flying under the radar.

Johnson saw opposing teams clog driving lanes last year after he diced up opponents with his speed and handle in his first year. Champagnie should expect the same kinds of treatment from defenses.

Capel was right there along with Johnson when he struggled with inconsistent shooting and turnover trouble early last season. He said he is well aware of how early success can make a player complacent.

“Justin can learn a lot from what Xavier went through with the expectations,” Capel said. “It’s very different when you’re playing with expectations. Sometimes that can get the best of you … It can make you feel yourself and then you don’t work as hard … We haven’t seen anything like that yet but it’s something we have talked about.”

It’s a lesson Capel has repeated to his team frequently over the past two years at Pitt.

In both the 2019 and 2020 seasons, the Panthers came out of the gates firing. Marquee upsets against Louisville two years ago and Florida State just last year inflated expectations faster than the young Panthers could keep up with. Justified or not, talk of a long-awaited return to the NCAA postseason filled the air around the Pete, only for those hopes to come crashing down to Earth with a 9-29 conference record combined over those two seasons.

But even with their shortcomings during Capel’s tenure so far, optimism continues to grow. Johnson, Champagnie and Toney are expected to anchor the Panthers on both ends. Meanwhile, highly touted transfer Ithiel Horton is free from his required one year on the sidelines, while a class of talented first-years make up the bulk of the bench.

The Panthers do not have a full schedule finalized yet, and we won’t know how all of their different pieces fit together on the court for more than a month. Right now, their season opener is a Nov. 25 game against Morgan State, but for Capel, just having something to prepare for made Wednesday’s return momentous.

“It continues to give us hope,” Capel said. “It’s challenging when you look at the current environment and everything that is going on. To have a little bit of normalcy and to have hope as we continue to move closer to playing on Nov. 25, knowing that that’s not going to be normal but the fact that there is hope is important for us.”