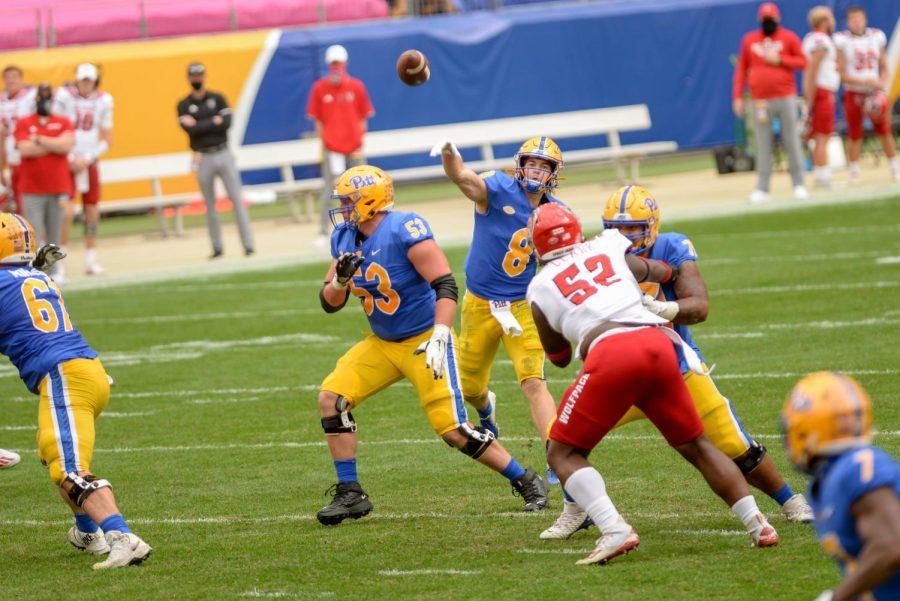 Senior quarterback Kenny Pickett’s health is questionable due to an ankle injury sustained during last week's game against Boston College.

Coming off back-to-back losses, the Pitt Panthers (3-2, 2-2 ACC) travel to South Beach to take on the No. 13 Miami Hurricanes (3-1, 2-1 ACC) Saturday at noon on the ACC Network. The Panthers are eager to redeem themselves after last week’s heartbreaking overtime loss to Boston College.

Redshirt senior kicker Alex Kessman’s season-long struggles continued in the game against Boston College. He missed two field goals in regulation and an extra point in overtime. Neither field goal he missed was a chip shot. During Thursday’s press conference, head coach Pat Narduzzi stuck by his kicker, reinforcing his own belief in Kessman’s abilities.

“I don’t know the average percentage on a 45-yard-plus field goal around the country is, but if you hit one out of three of those, which is what Kess did, you’re pretty darned good, and a 58-yarder obviously is tremendous and gives us a chance in overtime,” Narduzzi said.

Senior quarterback Kenny Pickett, however, did not disappoint against Boston College. He’ll need another stellar weekend to keep up with a talented Miami offense, which averages 36.8 points and more than 425 yards of offense per game.

The quarterback Narduzzi speaks of is redshirt senior D’Eriq King. Named to both the Maxwell Award and Davey O’Brien Award watchlists before the season began, King brings versatility that Pitt hasn’t seen yet this season. There are few quarterbacks in the ACC who can make plays with their feet and their arm in the way King can.

Through four games, he has 857 passing yards to go along with 241 rushing yards. Narduzzi said while watching King play, he noticed the speed that makes King an X-factor for Miami on the offensive side of the ball.

“He’s got a little different burst to him. The guy can run,” Narduzzi said. “When you watch him run through Clemson’s defense, you know there’s some good speed on the field.”

Miami faced Clemson, the No. 1 team in the country with the second fewest total yards allowed per game in the ACC, last week. King had his first taste this season of stellar defensive play against the Tigers, and Pitt won’t make it easy on him either.

King only threw for 121 passing yards against the stout Tigers defense last week, but ran for 84 yards and a touchdown. The Hurricanes’ electric offense that scored 52 points against Florida State and 47 against Louisville met its match last week. Responsible for all but five of his team’s yards, King kept Miami in the game until Clemson pulled away in the third quarter.

The Panther defense stumbled the past two weeks after an electric start to the season. However, the team still out-gains opponents by almost 150 yards per game on average. This discrepancy in yards gained to yards allowed is a product of allowing the second fewest rushing yards per game in the nation, as well as sixth fewest total yards allowed per game. The Panthers lead the ACC in each of those categories.

Pitt’s defensive dominance starts with its line. When All-ACC redshirt junior defensive tackle Jaylen Twyman opted out before the start of the season, Pitt lost double-digit sacks. The question then became, “Who will step up in his absence?” Look no further than redshirt senior defensive ends Patrick Jones II and Rashad Weaver. With a combined 11.5 sacks and 35 total tackles, the end pair is one of the best in the nation.

Jones leads the nation with seven sacks, while Weaver is fifth with four and a half. They’ve both been excellent through Pitt’s first five games and are proving they deserve to be early round draft picks next year. Defensive line coach Charlie Partridge touched on how the end pairing feeds off each other to create success for one another.

“There’s no doubt that with those guys coming from either side, it really makes it hard for other teams to double-team,” Partridge said.

Houston Texans All-Pro defensive end J.J. Watt racked up seven sacks in 13 games in his best college season, so for Jones to have already hit that mark after five games is astounding. Even with that, Partridge still believes Jones has yet to reach his maximum potential.

“I still think there’s room for him to grow, there’s things we’re working on every day from a technique standpoint, so I still think his ceiling is higher,” Partridge said.

If Pickett is healthy, the quarterback duel will be fun to watch. Narduzzi rarely comments much on injuries, but in Thursday’s media session he mentioned Pickett’s readiness after the senior quarterback left Saturday’s game briefly with an ankle injury.

“Kenny’s worked his tail off,” Narduzzi said. “Kenny’s tough, I mean you saw him finish the [Boston College] game, so is he 100% healthy? No. But I feel good with where he is right now.”

Despite Pickett’s questionable health, Pitt’s offense has proven itself to be more capable than its reputation lets on, averaging more than 400 yards per game. And it has a favorable matchup in the Hurricanes. Miami enters play allowing almost as many yards as it gains.

Narduzzi’s vote of confidence is a big deal headed into play this week and signals that Pickett — the ACC’s passing leader — is ready to take on the top-15 Hurricanes.

It’s hard to stop King and the Miami offense when they get going, and Pitt’s defensive numbers have come back down to Earth over the past two weeks.

The entire Pitt defense will need to have eyes on King at all times, contain him as it did with opposing quarterbacks through the first three games of the season and limit the chunk plays by using far more depth to keep players rested. But, with Pickett banged up, I don’t think the Pitt offense will be able to outscore the Hurricanes.