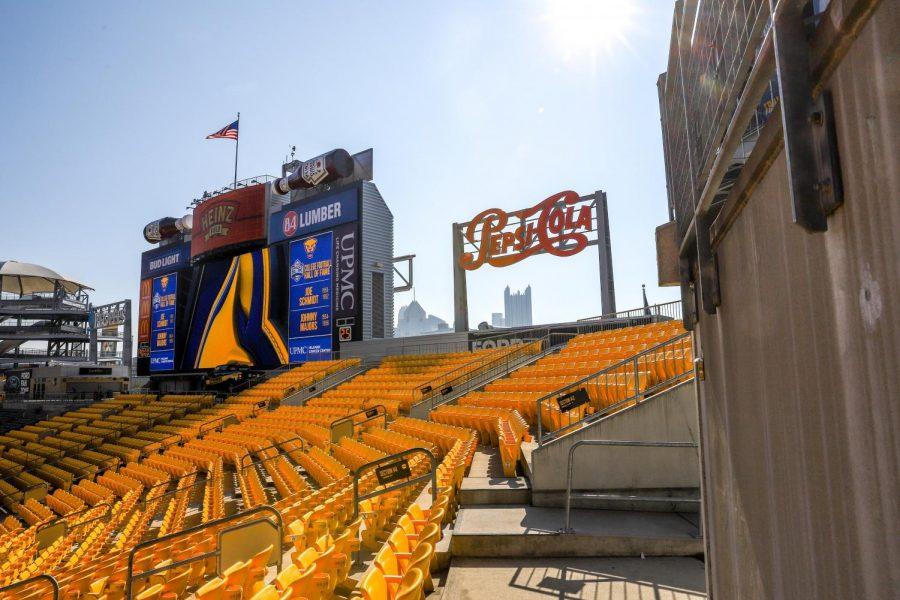 The first four home Pitt football games of the year were played in front of a sea of vacant yellow seats. But that will change when the Panthers return home a week from Saturday for a date with undefeated Notre Dame.

Shortly before the Panthers ventured north to Boston for their first road contest of the season — a losing effort in overtime to Boston College — last weekend, Gov. Tom Wolf announced that he had lifted restrictions that prevented spectators from attending football games at Heinz Field for the month of September.

Christian Spears, the deputy athletic director and chief operating officer for Pitt football, told The Pitt News that after players, coaches, officials and support staff are accounted for, there will be about 4,800 seats available. State guidelines allow for 7,500 people to populate the entirety of Heinz Field at one time, the largest gathering allowed for any event — indoor or outdoor.

All Heinz Field policies regarding social distancing and mask-wearing — in addition to adjusted concessions options — will be in effect for Pitt games. These guidelines were already in place for the Steelers game this past weekend.

Pitt’s next priority will be the return of the Panther Pitt student section in the north end zone, according to Spears. A thousand students will be able to claim tickets in total, with those who purchased the Student Panther Club membership before the season began getting the first crack at reserving seats for the Notre Dame game.

“We absolutely wanted to preserve the Panther Pitt,” he said. “It started to develop a kind of connection with the students when we expanded the end zone to just students a couple years ago … and so trying to preserve that space for them was critical.”

The Pitt band and dance team will also have their usual seats in the Panther Pitt reserved.

Almost 600 students bought the Student Panther Club membership for this season, which would typically earn access to every home football and basketball game in addition to the t-shirts designed for the accompanying student sections.

Spears said between those who became members this year and the almost 3,000 students who were members last year, he expects the student allotment to dry up quickly.

The newly upgraded campus shuttles — which have social distancing and mask mandates in place — that typically carry students around Oakland will replace the sometimes-crowded yellow school buses that carried students from outside Nordenberg Hall to Heinz Field last season.

Students who want to attend the Nov. 21 contest versus Virginia Tech will be free to purchase tickets for $5 like they would for a typical game.

The Panthers hit the road again this weekend — they head to Miami to take on the No. 13 Hurricanes — so only two games remain on Pitt’s home slate, but they are marquee matchups.

The aforementioned No. 4 Fighting Irish roll into the Steel City on Oct. 24, which promises to be a hot ticket. The next home contest after that is not until Nov. 21 when No. 23 Virginia Tech comes to Pittsburgh, where the Panthers will try to redeem a 28-0 blowout loss in Blacksburg last season.