Students will be asked to shelter in place for two weeks before winter break, head of COVID-19 Medical Response Office says 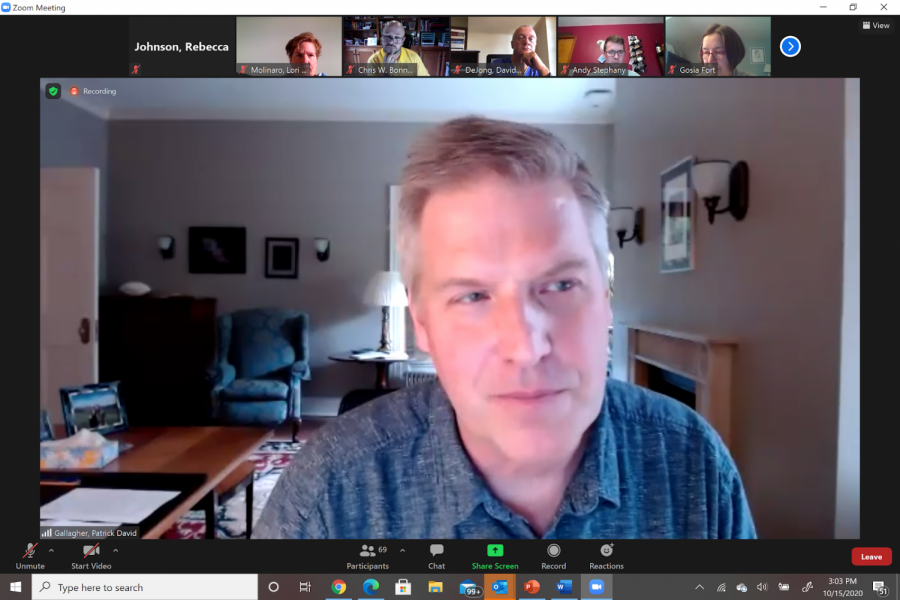 Chancellor Patrick Gallagher said the University would send out more concrete guidance on the shelter-in-place period “shortly,” during a virtual Senate Council meeting on Thursday.

All students will be asked to shelter in place for 14 days before leaving campus for winter break, according to Dr. John Williams, the head of Pitt’s COVID-19 Medical Response Office.

Williams, chief of the School of Medicine’s Division of Infectious Diseases, discussed the new shelter-in-place guidelines as well as other COVID-19 updates at Thursday afternoon’s Senate Council meeting. These updates come four days before Monday’s move to the Guarded Risk phase — the lowest level of Pitt’s three-tiered reopening system. While in the Guarded Risk phase, most classes will have the opportunity to be in person, shared spaces will be open and gatherings are capped at 250 people.

Williams said the new shelter-in-place guidelines differ slightly from those put in place at the beginning of the semester, because on-campus students will be required to complete all 14 days at Pitt rather than seven at Pitt and seven at home. The University did not track whether students completed the 14 day shelter-in-place period in August, though.

Williams said there will be no way to enforce the shelter-in-place rules for off-campus students, but he trusts Pitt students to make safe decisions. He said on-campus students have a team from Residence Life who will make the shelter in place “feasible and easy.” He said the CMRO is still developing plans for students returning to campus in the spring.

“For depopulation, we can’t really force off-campus students to shelter in place in their dwelling,” Williams said. “Pitt students are wise enough to recognize, we’re all in this together and having a kegger and shutting down the whole campus isn’t productive.”

Williams added that during the 14-day shelter-in-place period there will be no in-person classes regardless of the University’s operating posture. Classes will end on Nov. 20 for Thanksgiving break. Students will not return to campus after Thanksgiving, instead finishing classes remotely through the end of the fall semester on Dec. 5.

Chancellor Patrick Gallagher said the University would send out more concrete guidance on the shelter-in-place period “shortly.” He said Pitt is dedicated to protecting students’ families.

“We often have been thinking about protecting ourselves when we’re bringing everyone on campus,” Gallagher said. “What we’re really concerned with now is protecting the families of our students.”

Pitt added 10 new COVID-19 cases, composed of nine students and one employee, between Friday and Monday. This follows an increase of seven new cases, composed entirely of students, between last Monday and Thursday.

The University has had 311 students and 32 employees test positive since June 26, with 295 students and 31 employees recovered thus far. One of the last seven days has seen no new positive cases, according to data reported by Pitt.

Williams also clarified the University’s guidance regarding the Guarded phase before Monday. He said while larger gatherings will be allowed, some classes will move in person and dining halls will open some seating, it is important that students still maintain proper mitigation measures like wearing a mask and social distancing.

“Yes larger gatherings are allowed, however those gatherings should still only happen if there’s a reason like a class, a student activity, a band practice, something like that. Not a party — keggers are still not a good idea,” WIlliams said. “Even with a larger gathering that is only if everybody’s masked and you can maintain distance.”

He said three weeks of the Guarded phase before the 14 day shelter-in-place period is “better than no weeks.”

“If you meet the criteria to go to a lower risk — not zero risk, still need your mask — status, why would you not do that,” Williams said. “We want to use the system as it was designed. The students have worked really hard. This semester has not been what any of them expected or planned for … and they have done magnificently. They deserve for us to stick to our plan.”

Several campus leaders said they are worried about Pitt moving to its lowest risk posture. Eric Macadangdang, the president of the Student Government Board, said he believed it would be in the “best interest” for Pitt to remain in the Elevated Risk phase for the entire fall semester. Chris Bonneau, the president of the University Senate, said he is also “very concerned” about the change in risk postures and how the community may interpret it.

Williams said he is pleased to hear people are concerned, but this change in status means the reopening plan is working as it should.

“It’s hard to put an exact number on it except for a ridiculously high number,” Williams said. “It depends on several factors — what is the absolute increase number relative to the fact that we have 23,000 students here in our environment, how rapidly the numbers are increasing and the nature of the spread.”

Gallagher said the transition from Elevated to Guarded Risk demonstrates the success of the University’s planning.

“This is exactly what our system was supposed to do. We lower the risk slowly and cautiously, we move to more permissive postures but when things are changing we can move very quickly and elevate.”