Shorthanded Panthers come up short in 31-19 loss at No. 13 Miami 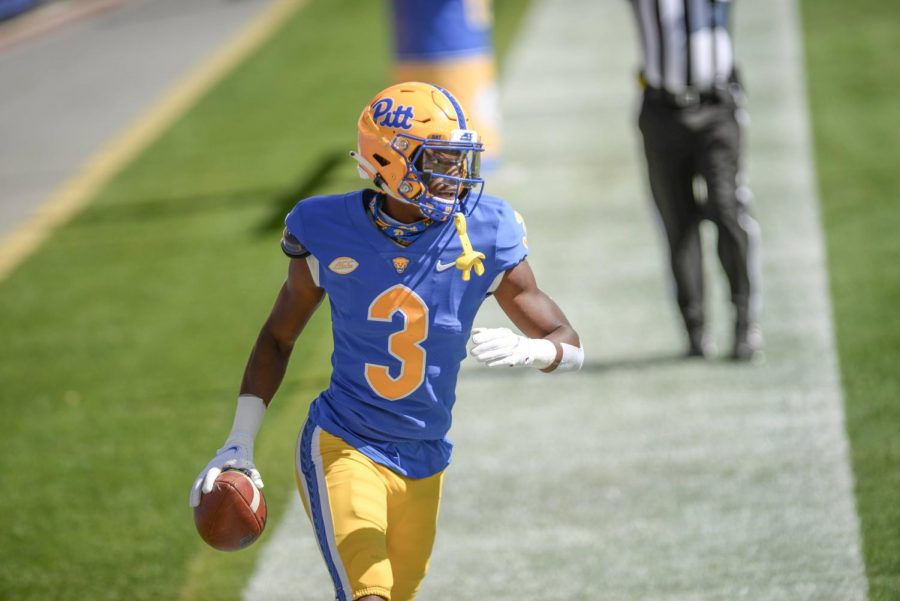 Pitt headed into a favorable matchup three weeks ago with a prime opportunity for the program’s first 4-0 start since 2000. The season looks a lot different now.

The shorthanded Panthers (3-3, 2-3 ACC) fell 31-19 at No. 13 Miami (4-1, 3-1 ACC) for their third consecutive loss on Saturday. Big plays doomed the Panther defense, while Pitt’s recurring offensive struggles continued to haunt the team.

Pitt announced before the game that no players would miss Saturday’s game for COVID-related protocols. Pitt has now gone four straight weeks without a COVID-related absence.

The Panthers did have a number of crucial losses from injuries. Pitt senior quarterback Kenny Pickett, who suffered a left ankle injury against Boston College, didn’t make the trip to Florida. Narduzzi had left Pickett’s status ambiguous the entire week leading up to Saturday. It’s only the second game he hasn’t started since his sophomore year.

“Kenny’s worked his tail off,” Narduzzi said on Thursday. “Kenny’s tough. You saw him finish the game. Is he 100% healthy? No. But I feel good with where he is right now.”

He revealed after Saturday’s game that he knew Pickett wouldn’t play early this week, but didn’t want to give Miami a strategic advantage.

“I didn’t want Miami to know,” Narduzzi said. “I wanted them to have to prepare for whatever. Maybe they had a clue, but we knew early in the week.”

With Pickett out, the Panthers turned to redshirt first-year Joey Yellen, an Arizona State transfer, under center. Yellen looked sharp on the Panthers’ first possession, completing five passes for three for first downs. The drive stalled in Miami territory, however, and redshirt junior punter Kirk Christodoulou pinned the Hurricanes inside the 5-yard line.

Christodoulou wound up emerging as Pitt’s best offensive player in the first half, as the Panthers failed to get anything going in their run or pass game. Pitt gained only 118 yards total in the first period, with only 19 yards coming on the ground. Chirstodoulou had four punts for an average of 48 yards, including two inside Miami’s five yard line.

Pitt’s defense forced a Miami punt early, but allowed a 35-yard touchdown pass from redshirt senior D’Eriq King to junior Cam’Ron Harris, giving the Hurricanes a 7-0 lead. The defense held steady for the next two possessions, but an aggressive fake punt call on special teams cost the Panthers in the second quarter, as the Panthers turned it over on downs and gave the Hurricanes terrific field position.

Miami capitalized on the opportunity, marching into the red zone. Pitt sacked King on third and goal, but a facemask penalty on redshirt sophomore defensive lineman Tyler Bentley gave the Hurricanes a fresh set of downs. King tossed it to junior tight end Will Mallory two plays later for his second touchdown pass of the game, putting Miami up 14-0.

“That’s kind of been the story of our season,” Panthers redshirt senior linebacker Phil Cambell III said. “We stop them and we shoot ourselves in the foot with a penalty and it ends up in a score. It’s happened several games, not just this game. It just comes down to working on it this week. We have to be better with that.”

Pitt finally got points on the board on its next possession, moving the ball 60 yards up the field on nine plays to allow senior Alex Kessman to chip in a field goal for Pitt’s first score of the game.

The Panthers needed a spark. They got it from the most exciting player on the field — redshirt junior safety Paris Ford. The preseason All-American candidate picked off a weak pass from King, giving the Panthers the ball back in the red zone. Pitt’s offense couldn’t punch it in, though, so Kessman made another field goal, cutting Miami’s lead to eight going into the second half.

The Hurricanes opened the second half with force, as King completed a 38-yard pass to a wide-open Mike Harley along the sideline to put the Hurricanes ahead 21-6. A 55-yard reception by first-year Jordan Addison got Pitt’s offense moving, but the unit stalled in the red zone again. Kessman made his third kick of the game, which put him atop Pitt’s all-time field goals list.

Although the Pitt secondary has given up a boatload of huge plays this season, they also have a knack of coming up with pivotal turnovers. Redshirt sophomore cornerback Marquis Williams snagged King’s pass to the sideline and returned it all the way to the Hurricanes’ 1-yard line. A nifty play action pass to redshirt junior tight end Daniel Moraga gave Yellen the first touchdown of his career on the next play, getting Pitt back in the game at 21-16 in the middle of the third quarter.

But the costly mistakes hadn’t ended yet. Yellen fumbled on a third down sack, giving Miami the ball in Pitt territory. Mallory then walked into the end zone untouched for his second score of the day, a 45-yard touchdown reception that put Miami up 28-16.

Pitt began to give up on its struggling run game. The Panthers drove 74 yards on their next possession, passing on nine of 11 plays. They still couldn’t succeed in the red zone, however, and Kessman made his fourth field goal of the day.

The Panther defense tried to hang on in the fourth quarter, but Pitt’s offense couldn’t convert on many opportunities. Pitt has suffered the consequence of dropped passes all season long, and the missed catches emerged again on Saturday. Yellen had multiple first down passes dropped, including a crucial third and ten ball ahead of the sticks to junior wideout Shocky Jacques-Louis.

Yellen, who completed 22 of 46 passes for 277 yards and a touchdown in his first start at Pitt, wasn’t satisfied with his performance.

“Not good enough to win,” Yellen said. “That’s kind of the big thing. I gotta watch the film more on how I did — seeing reads and feeling pressure and that sort of thing. But I know right off the rip that it wasn’t good enough to win.”

King showed off his talent against Pitt’s tenacious defensive line in the fourth quarter. He used up over seven crucial minutes on a drive that ended with a field goal, bouncing around in the backfield to avoid the pressure.

Down 31-19 with 4:13 to play, Pitt needed two immediate touchdown drives on a day where its offense had been stifled time and time again. Yellen found Addison for 21-yards to start the drive, but four straight incompletions turned the ball over on downs. King’s 16-yard completion to first-year Jaylan Knighton sealed the game, allowing the Hurricanes to run the clock out to victory.

Pitt returns to Heinz Field next week against No. 4 Notre Dame, which will allow fans for the first time this season. Narduzzi wouldn’t reveal if Pickett will play against the Fighting Irish.

“We expect Kenny to be back ASAP,” Narduzzi said. “Will he be back this weekend? I don’t know. There’s a chance and I certainly hope after the open weekend for sure.”