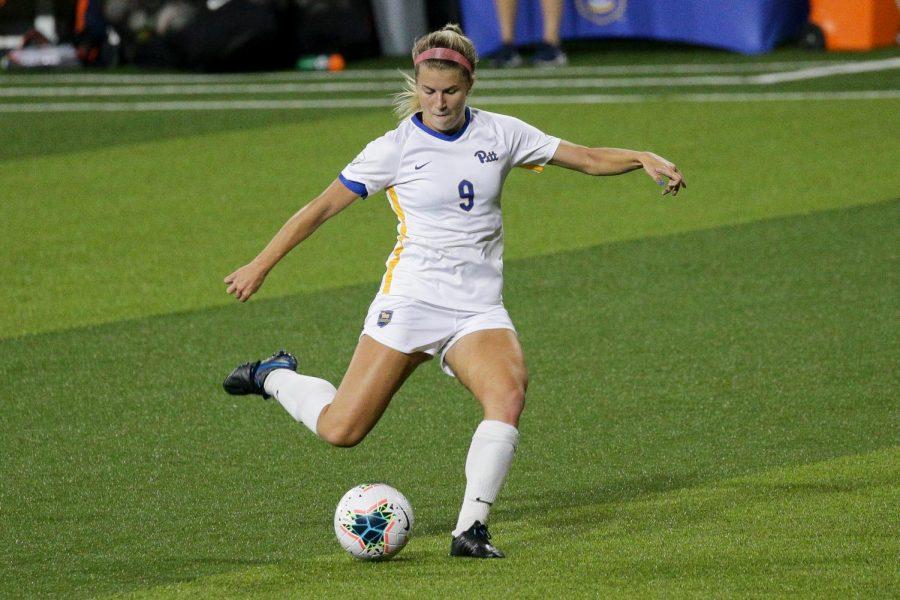 Pitt women’s soccer celebrated its last home game of the season with a 2-0 bounce-back win against the Miami Hurricanes.

The Panthers also celebrated Senior Day by honoring the only senior on their roster, midfielder Dixon Veltri. The team honored her with a presentation at center pitch and a framed jersey. Assistant coach Ben Waldrum, the son of head coach Randy Waldrum, had nothing but praise for the team’s captain. Veltri got the start for the Panthers in today’s match.

“We couldn’t be happier with her,” Ben Waldrum said. “She’s done a great job at helping lead this team this year, on and off the field. I can’t say enough about her personally.”

The first half was riddled with shots from the Panther’s offense, including two on goal. The best chance for the Panthers came in the 21st minute, when Pitt sophomore forward Amanda West got off three shots in three minutes. Each shot came closer to the target, and the last one forced Miami junior goalkeeper Tyler Speaks to make a diving save.

The Hurricanes had their chances, too. A free kick in the 16th minute led to a cross in the 18-yard box, but it sailed over everyone’s heads for a goal kick. The half ended with the score knotted at zero.

Waldrum said the amount of shots the team manages means nothing if players can’t put more of them in the net.

“Even though we created a lot of chances in the first half, we weren’t super thrilled with the lack of being as dangerous as we could be, and that was the message at half time,” Ben Waldrum said.

The Panthers internalized Waldrum’s message, and continued to put pressure on the Miami defense in the second half. They had several scoring opportunities in the first 20 minutes of the second half, but they couldn’t find the back of the net.

McKay said she was glad she could make the most of her scoring opportunity as a defender.

“As a centerback my job is usually on the other side of the field, so it’s always fun to be able to go up on a corner and try to get my head on it,” she said.

After a string of corner kicks by the Hurricanes a couple minutes later, Pitt was back on the offensive. West took the ball from midfield and rushed down the left side toward the goal. She worked her way around the defense and shot the ball at the lower right-hand corner of the goal. Her 12th score of the season gave the Panthers a 2-0 lead and solidified their victory.

The rest of the half saw the Hurricanes attempt to inch their way back into the match, but they couldn’t get past the Pitt defense. The final horn sounded with the Panthers taking the 2-0 victory.

The Panthers weren’t worried about how their last match — a drubbing at the hands of No. 2 Florida State — would affect their play in Sunday’s match. McKay said they needed to take each match individually, and emphasized the importance of playing one match at a time.

“You can’t change what happened on Thursday,” McKay said. “You look at it, you learn from it, and I think that’s what we did today.”

The Panthers are still fighting for a spot in the ACC Tournament, and they’ll need to have a successful final road trip for that to happen. Waldrum said he knows the team needs to maintain its momentum on the road.

“We want to control our own destiny. We’ve done that today, and that’s going to be the approach on the road,” Waldrum said.

The Panthers start the final road trip of the season with a matchup against the Syracuse Orange on Sunday.