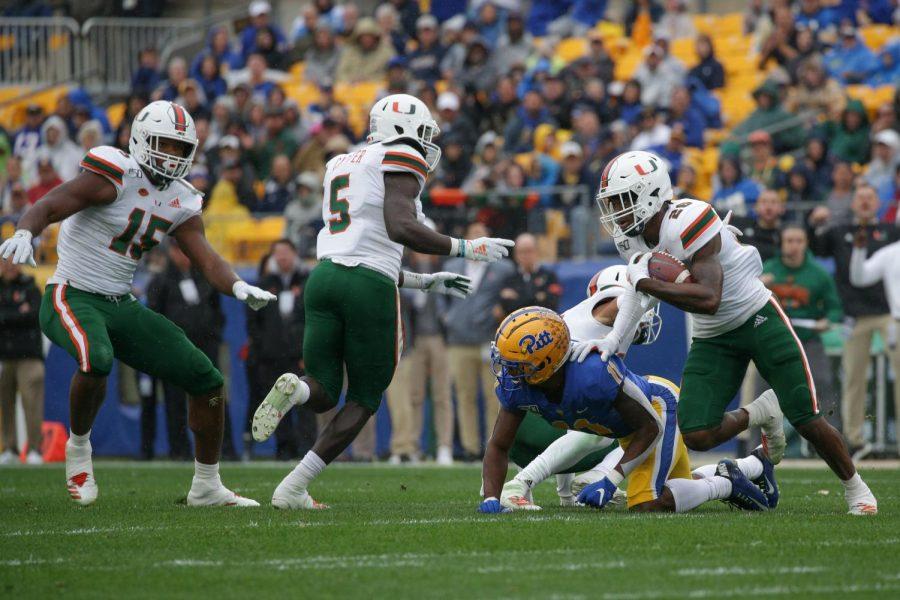 Pitt football fell to No. 13 Miami Hurricanes Saturday with a 31-19 loss.

Pitt football’s promising start to the season is by now a relic of the distant past, as the team continued its recent struggles Saturday with a 31-19 loss to the No. 13 Miami Hurricanes.

There’s little left to be said about this once-ranked Pitt football team. The defense was solid once again this week, yet it seems opponents have simply found the inevitable weak points — and with an offense seemingly allergic to the end zone, it doesn’t take much scoring to beat Pitt.

As for the team’s offensive weaknesses, Saturday’s game only further highlighted the same mistakes Pitt has struggled with all season. Penalties, dropped passes, an abysmal run game and a total inability to score in the red zone ultimately cost the Panthers the game.

“Offensively, we didn’t run the ball like we needed to, we had too many drops, too many opportunities to make plays … and we just dropped the ball and didn’t finish the game,” Narduzzi said. “It starts with me having them ready to go, and our guys just making plays. We just gotta go back, and look at what we’re doing and how we’re doing it and just kick the ball to our playmakers and make plays.”

What made Saturday’s game even more frustrating was just how close Pitt came to pulling off the upset. Despite missing senior starting quarterback Kenny Pickett, Pitt kept pace with an explosive Miami attack. But Miami’s red zone offense proved the deciding factor, with the Hurricanes’ four touchdowns and a field goal trumping the Panthers four field goals to a lone touchdown.

To rub salt in the wound, first-year transfer quarterback Joey Yellen — who filled in for Pickett — actually had a great game. The young quarterback held his composure in the pocket, and in the absence of a run game, went 22-46 passing for 277 yards.

Needless to say, had Pitt found pay dirt rather than watching redshirt senior kicker Alex Kessman rattle off field goal after field goal, the Panthers would have won the game. Yet such a refrain has become all too common for this team. Time and again, Pitt has lost close games because of its inability to avoid errors.

As far as such mistakes go, the most frequent offender is far and away the offense. Watching Pitt drive the ball is infuriating, with every step of progress maligned by either a false start or an illegal formation penalty. Pass plays often bounce off the hands of wide receivers, and viewers are by now familiar with sophomore running back Vincent Davis’ agonizing attempts to reach the line of scrimmage.

More often than not, Pitt’s rhythmless drives are bogged down behind the sticks before they can even begin, only for the punt team to come out and salvage what can be saved on fourth and long. But even successful drives inevitably end with special teams and Kessman trotting out to kick a short field goal after the offense sputters in the red zone.

“They did a good job stuffing us up front,” Narduzzi said. “We didn’t get a push on their front four, we rushed for 22 yards. When you look at that, it comes down to being a passing game, and Joey’s throwing it every down … And when we get in the red zone, we can’t kick four field goals.”

On the defensive side of the ball, Pitt played well enough to win, but the defense was hardly without mistakes. Blown coverages — a common refrain this season — gave Miami a couple easy scores up the middle, and penalties sustained successful Hurricane drives.

That said, Pitt’s defense also managed two timely picks to give its offense what should have been easy touchdowns, and the run defense was impeccable as always. Perhaps the greatest tragedy of this year’s Pitt football team is that its defense cannot also play offense.

At the end of the day, Pitt’s offense seemingly cannot score touchdowns. What was once a promising season is now bogged down for the same reasons past promising seasons failed — the Panthers simply cannot get out of their own way.

“That’s kind of been the story of our season so far,” Campbell said. “We stop them, then we shoot ourselves in the foot with a penalty, and it ends up in a score. It’s happened in several games, not just this game. We have to be better with that.”

Ultimately, Narduzzi’s squad will simply have to be more disciplined. Penalties must be avoided at all costs, and wide receivers must find a way to catch the football. In the red zone, the offensive line will have to somehow find the needed push, and the Panthers will absolutely have to find a way to punch the ball in.

For now, answers are unlikely. This team does not appear capable of living up to the high standards set in the offseason, although the Panthers do have the talent to pull off a major upset before the year is up. As for next season, perhaps it would be best if next year’s team is a little less promising.