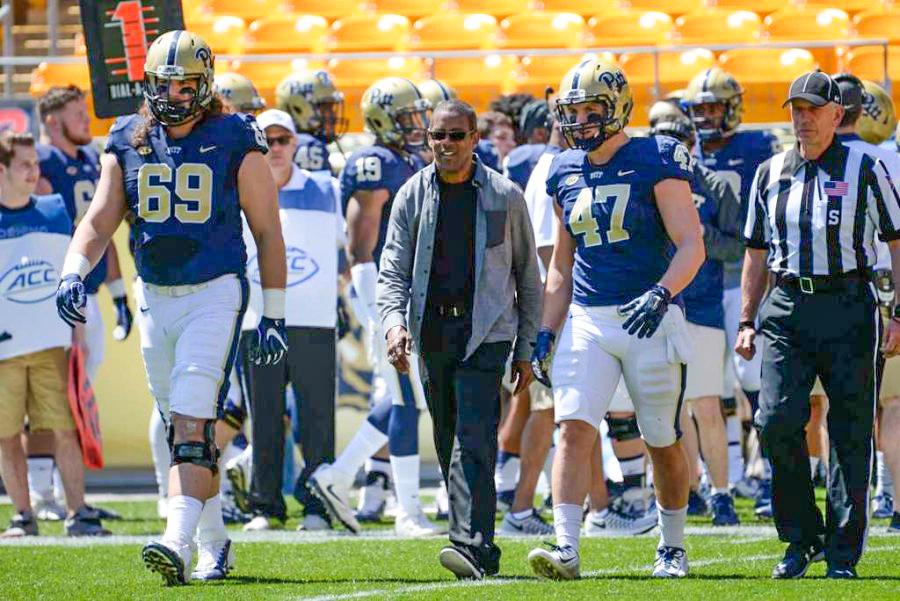 Tony Dorsett walks onto Heinz Field with Pitt Football in 2016.

Throughout its decorated athletic history, Pitt has produced numerous phenomenal athletes. The greater Pittsburgh area has also been home to some of the greatest high school athletes of all time. While it is always fulfilling to see former Panther athletes succeed at the professional level, it is perhaps even more special to see homegrown talent shine at Pitt.

It is no coincidence that Pitt’s greatest hometown heroes have played for its most high-profile programs. The following is the “Mount Rushmore” of athletes who are not only Panther greats, but also Pittsburgh natives.

The most decorated athlete to ever wear the blue and gold is a clear-cut choice for any list of Pitt’s greatest athletes.

Dorsett grew up in Aliquippa and attended Hopewell High School, where he stood out as one of the best running backs in the country.

As a first-year, he exploded onto the scene at Pitt, setting the first-year rushing record with 1,686 yards in 1973. And just three games into his sophomore season — his 15th overall collegiate game — Dorsett broke the school’s all-time rushing record.

While his first three years at Pitt would have been enough to cement him as the greatest running back in school history, Dorsett’s senior season solidified him as perhaps the greatest college running back ever. In 1976, he rushed for 2,150 yards and 22 touchdowns, winning the Heisman Trophy and leading Pitt to a national championship.

Quite frankly, it is borderline impossible to have a more impressive season than Dorsett had as a senior at Pitt. The college and professional Hall of Famer will forever be considered one of the greatest athletes to ever hail from the City of Pittsburgh and to ever wear a Pitt Panther uniform.

The term “hometown hero” may not even accurately encapsulate what Dan Marino means to Pitt.

Marino grew up in South Oakland, a neighborhood many current Pitt students call home. He was a high school standout at Central Catholic, just a few blocks down Fifth Avenue from Pitt’s campus. He played at Pitt from 1979-82, and while he does not have a national championship to show for it, he played on some of the greatest Pitt teams of all time.

Behind an offensive line featuring Russ Grimm and Mark May, and with the help of a defense headlined by Hugh Green and Rickey Jackson, Marino was the signal-caller for an astounding collection of talent. He was great in his first two seasons, but due to inconsistent playing time because of injuries, Marino’s statistics from his first-year and sophomore seasons are not exceptional.

But his junior season was absolutely unforgettable. The gunslinger threw for 2,876 yards, 37 touchdowns and 23 interceptions. Marino had emerged as a top NFL prospect but decided to stay at Pitt for his senior season. His struggles in his fourth season caused him to fall in the NFL draft, but his Hall of Fame professional career has teams who passed on him still losing sleep.

Despite spending just two years at Pitt, DeJuan Blair left a legacy large enough to solidify himself as a Panther legend.

Blair grew up in the Hill District and attended Schenley High School, a short ride from the Petersen Events Center. He joined Jamie Dixon’s team at an opportune time, as Pitt had been on the cusp of greatness for years before Blair’s arrival.

His talent was enough to make Pitt one of the most feared teams in the country. As a first-year, Blair averaged 11.6 points and 9.1 rebounds in 26 minutes per game, earning him Freshman All-America and Big East Rookie of the Year honors while also leading Pitt to a Big East tournament championship.

In Blair’s sophomore season, he led the best team in program history to a 31-5 record, a season that included Pitt’s first No. 1 overall national ranking in school history and an Elite Eight appearance in the NCAA Tournament. Blair averaged 15.7 points and a national-best 12.3 rebounds per game. He earned Big East player of the year, as well as Consensus All-America honors.

Blair’s time at Pitt may have been relatively short, but it was enough to establish himself as the greatest Pitt basketball player of all time.

Ditka attended Aliquippa High School and spent three years at Pitt. His receiving stats appear to be lackluster, but this is simply because of how the game was played when Ditka attended Pitt from 1958-60, where he played tight end and defensive line.

While he only accumulated 45 receptions for 730 yards across three seasons — albeit in an era where passing was considered a last resort — Ditka led the team in receiving all three seasons. He was a feared blocking tight end as well, and finished sixth in Heisman voting his junior season despite accumulating just 11 receptions on the season, also earning All-America honors.

His talent with the ball in his hands was evident in his limited opportunities, as he averaged 16.2 yards per reception in his career, and was selected fifth overall in the NFL draft by the Chicago Bears.

Ditka is a college Hall of Famer, but he is best known for his Hall of Fame career as a professional player and coach. He won the NFL championship with the Bears in 1963 and coached them to a Super Bowl victory in 1985, as well.