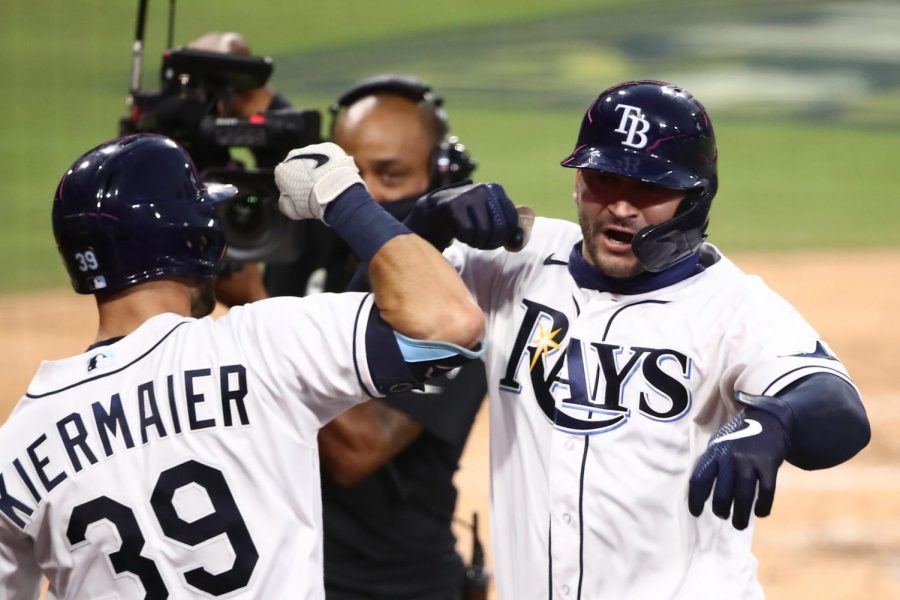 The Tampa Bay Rays' Mike Zunino, right, celebrates a solo home run with teammate Kevin Kiermaier against the Houston Astros in Game 7 of the American League Championship Series at Petco Park in San Diego on Oct. 17.

The Dodgers entered the season as the favorites to represent the National League in the championship and finished the regular season at 43-17, good enough for the best record in baseball.

The Rays, on the other hand, found themselves projected by most experts to be in the mix, but weren’t the favored team from the American League to reach the Fall Classic. Though not favored at the beginning of the season, the Rays went out and put together the second-best record in the MLB, behind only the Dodgers, and the best record in the AL, finishing 40-20.

While these teams led the standings in the regular season, they had very different challenges to reach the Fall Classic. The Rays took a commanding 3-0 series lead over the Houston Astros, looking set for a sweep. They then dropped three straight games, creating a sense of panic ahead of a must-win game seven. Tampa Bay got things back on track, winning the decisive game 4-2.

The Dodgers found themselves on the other side of things, trailing 3-1 in their series with the Atlanta Braves. The Dodgers rallied to steal three wins in a row, with a late home run from Cody Bellinger lifting them over the Braves in game seven, securing their spot in the World Series.

Not only did these teams have opposite paths to the championship, but they feature opposite builds. The Rays lack star power outside of Charlie Morton and Blake Snell, appearing as more of a tough, gritty team that most wouldn’t expect in this position. They don’t have a whole lot of big names, but instead have a lot of under-the-radar guys that find a way to get the job done.

Meanwhile, the Dodgers have an abundance of stars. With Cody Bellinger and Mookie Betts roaming the outfield, Clayton Kershaw and Walker Buehler on the mound, and Corey Seager and Justin Turner in the infield, the Dodgers have a roster stacked with big names. Their attention-grabbing talent also means the Dodgers, unlike the Rays, are often expected to make the World Series, and anything other than bringing the Commissioner’s Trophy back to Los Angeles is considered a failure.

This difference in stars is clear in the difference in payroll between the two teams, as the Rays payroll is the third lowest in MLB, while the Dodgers’ is the second highest.

Both of these teams have a red-hot player this postseason — left fielder Randy Arozarena for the Rays shortstop Corey Seager for the Dodgers.

Arozarena has enjoyed a historic playoff run. The rookie has hit .382 in the postseason, with seven home runs, 10 runs batted in and 14 runs scored. While Arozarena has seen success throughout the playoffs, he hit his peak in the ALCS, where he put up a .321 average, with four homers, six RBIs and six runs scored. This includes a huge two-run home run in the first inning of game seven, giving the Rays an early lead against the Astros. Arozarena’s performance thus far in the postseason has earned him the record for the most playoff home runs hit by a rookie as well as the ALCS MVP recognition.

Seager has also had himself a record-breaking run this postseason. He hit five home runs and knocked in 11 runs during the NLCS, both of which broke NLCS records. This performance made him not only the hottest hitter on the Dodgers, but also earned him the NLCS MVP.

With the help of Arozarena and Seager, neither team has dealt with a shortage of runs this postseason. With excellent run production and top-tier pitching staffs Tampa Bay and Los Angeles match up well. The Dodgers do have one advantage — experience.

This difference in not only playoff experience, but World Series experience will become the difference maker in the series. Dodgers’ manager Dave Roberts took the job in 2016, meaning he has plenty of experience with the team in these situations. This experience is crucial to set lineups and decide pitching changes.

Los Angeles has an experienced roster and that gives them a crucial advantage over Tampa Bay. The series will turn out competitive, but the Dodgers will win in six games. Their talent will be too much for the Rays, and their stars will put up huge numbers to get L.A. over the hump for their first championship since 1988.