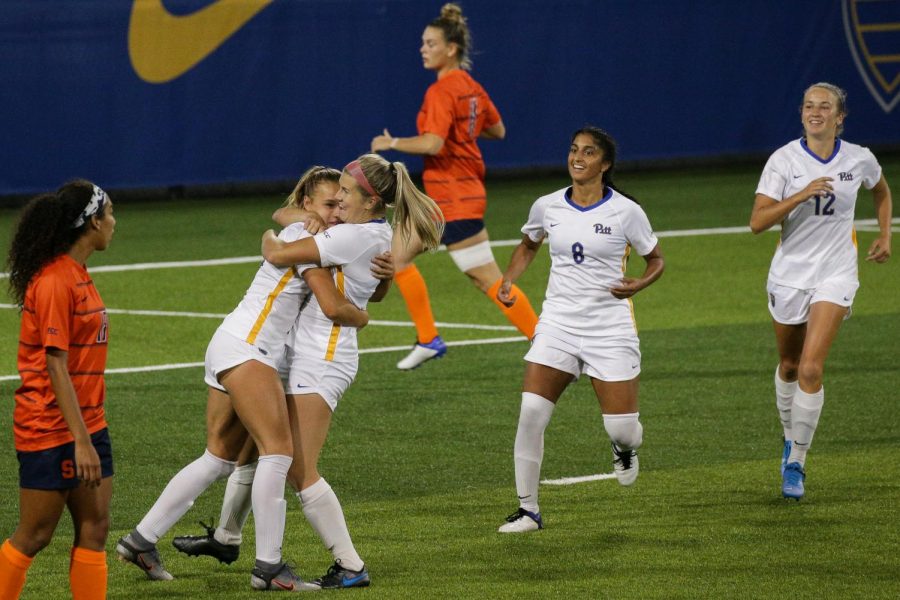 Sophomore forward Amanda West (9) celebrates with her teammates after scoring a goal on Syracuse during Pitt’s 2-0 victory over the Orange on Sept. 17.

Orange head coach Nicky Adams broke the news during a press conference Wednesday morning, hours before the announcement made things official, saying Pitt had “decided not to come.”

“Obviously, [we’re] not happy,” Adams said. “For us, that’s another game for us to improve in areas and get new corners on the field and try new things. So it’s unfortunate to lose this opportunity.”

Syracuse’s women’s soccer game against Pitt on Sunday will likely be canceled, head coach Nicky Adams said, after “Pitt has decided not to come.” SU Athletics said the cancelation hasn’t been finalized yet.

The ACC announced a shortened season in September, with each team playing eight conference matches — four home and four away. Schools could schedule regular season matches outside of these, but they wouldn’t count towards their ACC record.

Pitt loaded its schedule with 15 matches, more than any other ACC school. This included six nonconference matchups, as well as a ninth ACC game — against Syracuse — that wouldn’t count towards the league standings.

The stacked schedule backfired after a recent decision to reduce the maximum number of regular season games any ACC team could play from 20 to 16 games. Wanting to leave some room for regular season bouts in the spring, Pitt decided to cancel any non-league matches left in the fall.

“The growth of the team due to all the games we have been able to play is undeniable,” Pitt head coach Randy Waldrum said. “It is unfortunate, over a month into our season, that the decision to reduce the number of games we are able to play this year necessitated the cancellation of the game with Syracuse.”

Pitt and Syracuse opened their 2020 conference slates against one another earlier this season, with the Panthers grabbing a 2-0 victory at Ambrose Urbanic Field. The rematch will not occur this fall.

“We look forward to our future opportunities to play Syracuse, a program we certainly respect and appreciate competing against on an annual basis,” Waldrum said.

Because Pitt has already played 12 regular season games, and they have two remaining league games, they will only be able to schedule at-most two regular season matchups in the spring after the recent rule change. With fall championships moved to the spring, those tune-up matches could prove pivotal if Pitt earns a spot in the 48-team Women’s College Cup in May.

The Panthers are scheduled to take the field again next Thursday, Oct. 29, at 7 p.m for a road matchup against the Clemson Tigers.