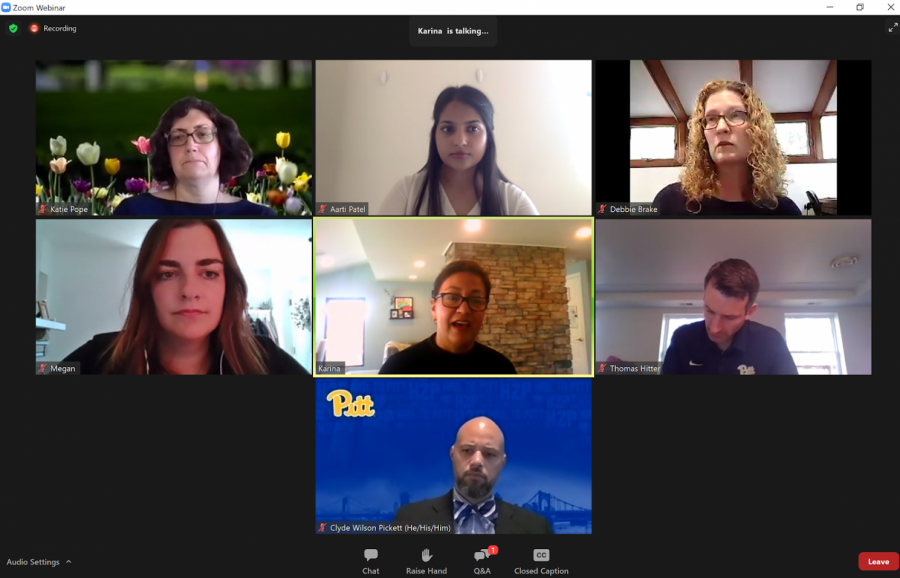 A panel of experts from Pitt and the city of Pittsburgh discussed the new Title IX regulations and their effects on the University Thursday via Zoom.

By Natalie Frank and Rebecca Johnson

Under new Title IX regulation, Deborah Brake said Pitt’s Title IX office could be barred from distributing any training materials which the federal government could perceive as “gender bias” — including the word survivor.

“What I see behind the regulations is a readiness to claim that any materials that make assumptions about the truthfulness of survivors — in fact, even referring to complainants as survivors — is being understood by the Department [of Education] as indicative of gender bias against male students accused of harassment,” Brake, the associate dean for research and faculty development at Pitt’s School of Law, said.

Brake and a panel of experts from Pitt and across the City discussed new Title IX regulations and their effect on the University at the Thursday afternoon panel “Unpacking the New Title IX Regulations.” This is the second part of the “Shattering the Statistics: A Collective Effort Towards Ending Sexual Violence” series hosted by Pitt’s Sexual Violence Prevention and Education Office.

The controversial new rules handed down from the U.S. Department of Education made several changes to Title IX offices across the country, including at Pitt. These include offering live hearings and cross examinations of survivors by the accused, a more narrow definition of sexual harassment, no requirement that colleges follow a specific timetable in responding to reports of abuse and no requirement that colleges respond to off-campus alerts unless it is an officially recognized student or institution organization, such as a fraternity, sorority or athletic housing.

Pitt’s Title IX office implemented these changes in August despite opposition from some University officials. Carrie Benson, the head of Pitt’s Sexual Violence Prevention and Education Office, said in August she was concerned by the “problematic” changes, but that her office would comply with them.

“Despite some common narratives, you can have both trauma-informed and due process in the same space and time,” Pope said. “I think what’s important is to make sure that we’re cognizant of that outreach and interaction knowing that not everyone who comes through our offices is going to go through a formal investigative process.”

Brake referenced the 2019 case John Doe v. Purdue University as a ruling that placed stricter scrutiny on training materials, and makes it easier for students accused of sexual assault to challenge universities’ handling of their cases.

Amy Coney Barrett, President Donald Trump’s nominee for the Supreme Court, led a three-judge panel on the U.S. Court of Appeals for the 7th Circuit in hearing the case. The court decided that Purdue University might have discriminated against a male student accused of sexual assault when it suspended him for a year, according to the Washington Post.

“In letting cases go forward, courts are pointing to things like statements and training materials or by trainers that suggest a readiness to believe women as survivors and be skeptical of men as complainants,” Brake said. “Training materials will be scrutinized.”

Brake added that this scrutiny doesn’t necessarily mean trauma-informed training isn’t possible, but just more difficult due to a “hypercritical” environment in some courts and the Department of Education.

“It doesn’t mean that trauma-informed training can’t be done,” Brake said. “it just means that there has to be much greater care to not fuel into the narrative that there is this bias against disciplined students on the basis of sex.”

Pope also addressed a number of other audience concerns surrounding the new rules, including live cross examination of survivors. Pope said, under the guidelines, two parties are allowed to bring an “adviser” — which can, but doesn’t have to be a lawyer — so they aren’t directly questioning each other.

She said the Title IX Office is working on partnering with the Allegheny County Bar Association to create a pool of advisers for those who don’t know where to get one.

“It almost brings the elements of the criminal justice system that are most traumatizing and most victim-blaming,” Schroeder said. “What we hear survivors say is that they’re seeking support and accountability, but what often keeps them from reporting is this fear of the outcome or the end of process. Do I really feel prepared to manage my emotions and sit in a courtroom and face the person who abused me?”

“In terms of the scope of coverage, there’s one thing I frankly find stunning about the regulations that we must understand from the outset,” she said. “And that is that this is a set of final regulations that are applicable only to harassment on the basis of sex, only applicable to sexual harrassment, not to any other form of harassment.”

The narrow definition makes reporting more complicated for survivors, according to Schroeder.

“The narrow definition creates a lot of confusion around what can be reported, and almost creates this continuum of trauma,” Schroeder said. “Did what happened to me rise to the level of what’s important enough, maybe it’s not severe and pervasive? Will this even be taken seriously if I report it?”

Pope said while most of the new regulations focus on the investigative portion of a report, reporting a case of sexual assault or harrassment “fortunately” remains the same. Pope said the Title IX Office’s priority remains to “address any immediate safety or interim measure concerns that a party may have” and then worry about an investigation.

“The most important thing to share with the community is that the way that you report sexual misconduct remains the same as it has been for the last five years at the University,” Pope said.

Pitt created a new sexual misconduct policy to address incidences of sexual assault and harrassment not covered by the new Title IX rules.

Tom Hitter, assistant vice chancellor for policy development and management, said because there was such a short implementation time frame over the summer, Pitt’s new Title IX policy is still considered an “interim procedure.”

“This allowed us to get something in the books that we can implement now and then eventually we will be able to run a full policy process to develop a permanent policy,” Hitter said.

Pope said as the University creates its permanent policy she is welcoming feedback, but much of the rules from the government are mandated.

“We want to make sure that as we move toward putting a permanent policy in place we continue to hear those concerns and questions,” Pope said. “Much of this is very prescribed to us in terms of what we can and can’t do.”