Column | Next level nowhere in sight under Narduzzi 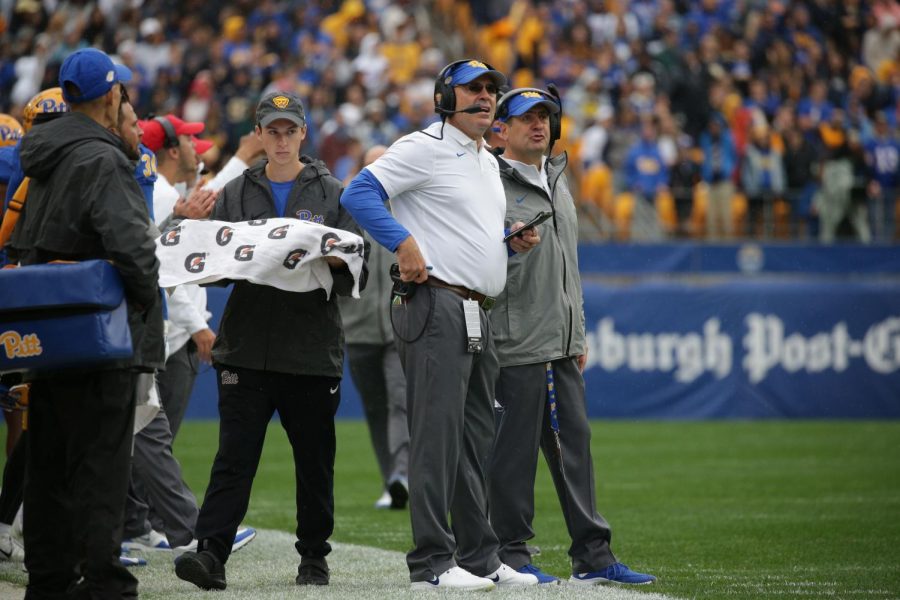 Football head coach Pat Narduzzi, is in his sixth year as a head coach at Pitt.

While the unprecedented circumstances of the 2020 college football season have raised reasonable questions regarding how to evaluate a coach’s performance, Pitt head coach Pat Narduzzi has made this task quite easy.

This season’s fate remained in question for most of the offseason, inciting stress and struggle for football programs across the country. To this end, every coach faced problems of diminished time and vast uncertainty while preparing for the season, and these do not serve as justifiable excuses for losing.

Pat Narduzzi is in his sixth year as the head coach at Pitt, and he’s shown a great deal of positives and negatives up to this point. Despite holding a winning regular-season record of 39-32, Narduzzi has gone just 1-3 in bowl games, and has failed to lead the Panthers to a better record than 8-5 in any given season. Much like any coach, he has received his fair share of praise and scrutiny for the decisions he’s made in his time at Pitt, both in terms of in-game decisions and overall philosophy on offense and defense.

When evaluating Narduzzi’s performance thus far, one thing remains abundantly clear –– this Pitt football season has already turned into a bonafide disappointment. Quite frankly, he’s had more disappointing seasons than positive ones as Pitt’s head coach. While a few of the Panthers’ woes in 2020 can be attributed to the pandemic, the majority of them resemble problems that have stayed unsolved throughout Narduzzi’s tenure.

Two main issues are direct products of the pandemic –– offensive chemistry and the absence of defensive tackle Jaylen Twyman. While the Panthers returned 18 of their 22 starters from 2019, two of their major departures included wide receivers Maurice Ffrench and Aaron Mathews. Kenny Pickett has a versatile arsenal of new offensive weapons, but keeping on the same page is crucial in the sport of football. Some of Pitt’s struggles moving the ball down the field could be consequences of Pickett having insufficient time to build a rapport with his pass catchers.

Additionally, Twyman made a strong case as Pitt’s best player coming into this season, and the defense took a huge blow when he opted out. While depth on the defensive line is one of the team’s major strengths, Pitt’s performance without its best player can’t be ignored.

But these two factors only explain so much. Many would’ve seen an 8-3 2020 record as a disappointment prior to the season. Now, through six games, the Panthers must fight for their postseason lives. How did Pitt go from hopes of reaching the ACC title game to facing the serious prospect of missing a bowl game entirely?

To anyone who watches Pitt football closely, it comes as no surprise that Pitt averaged significantly more rushing attempts than passing attempts in the first four seasons under Pat Narduzzi. Pitt averages 39.3 pass attempts per game and 37.0 rushing attempts per game through six games this year. Offensive coordinator Mark Whipple has adopted a more balanced approach since he arrived in 2019, but 37 rushes per game still shows a clear affinity for running the football. This mindset represents Narduzzi’s whole career.

While Narduzzi is a defensive-minded coach, the offense led his teams until 2019. He believes in the ground-and-pound style offense, which worked extremely efficiently when players such as James Conner, Qadree Ollison and Darrin Hall got the ball in their hands. Pitt’s offense has struggled immensely to run the football in the past two seasons, however.

Pitt averaged 3.5 yards per rushing attempt on 33.7 attempts per game in 2019. The offense has only averaged 2.9 yards per carry this year. For a team and a coach that have attempted to form an identity in running the football, those numbers are atrocious.

While the offense has struggled the past two seasons, the defense has excelled. Pitt entered this season with one of the most talented defenses in the country. It unsurprisingly leads the nation in sacks and boasts an excellent run defense thus far, but pathetic coverages, miscommunications and penalties in the secondary have played big roles in all three of Pitt’s losses. This trend appears in most of Narduzzi’s career losses.

Penalties and missed assignments don’t necessarily reflect on coaching until they become repeated problems. Pitt even struggles to keep players with the same jersey number from taking the field at the same time. The Panthers beat themselves with blown coverages and gifting their opponents penalty yardage in their losses to NC State and Boston College. Good teams do not beat themselves.

This doesn’t include all of Pitt’s struggles, but a clear set of core issues with Narduzzi’s performance this season have doomed the team. The Panthers run the ball almost 40 times a game, yet can’t even muster 3 yards per attempt. No running game leads to no passing game. On the other end, Pitt’s defensive line applies more pressure on quarterbacks than any team in the country, yet the Panthers have allowed an average of 305.3 passing yards and 3.7 passing touchdowns per game in its three losses. Combine this with constant penalties and poor play calling in the red zone, and it becomes clear that Narduzzi has failed this season.

Perhaps the most prominent concern surrounding Pitt football is the desire to emerge from the middle of the pack. Narduzzi has produced four winning Panther teams in his five full seasons, and his sixth team looked poised for a breakthrough. All this season has produced, however, is the guarantee of perennial mediocrity under Narduzzi. If Pitt truly wants to take the next step as a football program, they must find a head coach that can get them there.