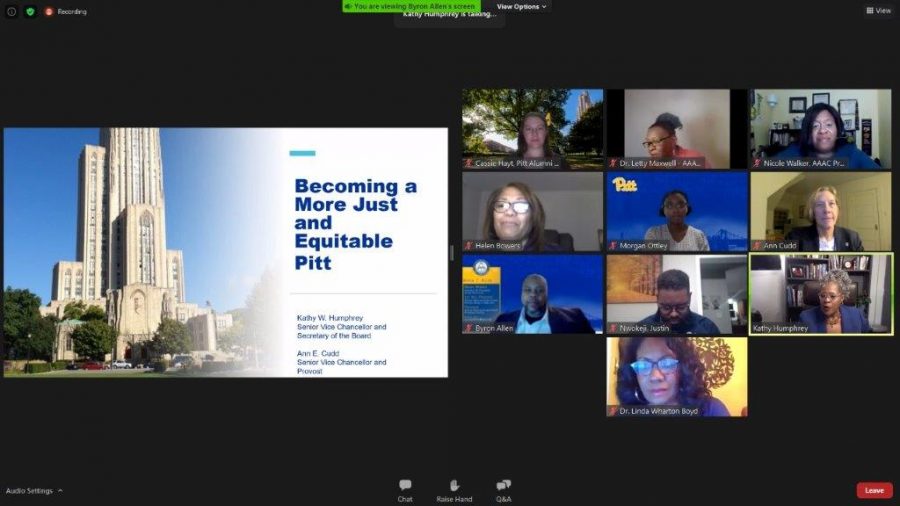 By Punya Bhasin and Rebecca Johnson

“What makes me sad about this is that those are the same things that I believe African American students have wanted since we have been allowed into the academy,” Parks, now the president of the African American Alumni Council, said. “Hearing those things come back the same was eye-opening and very impactful.”

AAAC, along with University administrators — including Provost Ann Cudd, Senior Vice Chancellor for Engagement Kathy Humphrey and Clyde Pickett, vice chancellor for diversity and inclusion — discussed Pitt’s current plans to help combat systemic racism and implicit bias on campus, as well as further ways to better engage with Black students at a Thursday town hall. A large portion of the event also focused on explaining how alumni can donate to the University and AAAC.

BAS and 17 other Black student organizations submitted a list of more than 20 wide-ranging demands to the University in late June. They touched on topics including amplifying the Black student voice, increasing the number of Black students and faculty, curriculum changes, additional training for employees and Pitt police reforms.

Parks said she views these demands as “requests” that the University must work with students to make a reality.

Humphrey said the University’s administration is working alongside the AAAC to create a more equitable campus.

“The first thing you have to do is look in the mirror and own who you really are,” Humphrey said. “That’s how we began our process to create a more just and equitable Pitt.”

Pitt launched an Anti-racism, Diversity and Inclusion Action Plan in July that addressed many of the BAS demands, including establishing in-staff service days, hiring more Black clinicians at the University Counseling Center and a policy that allows student organizations to request security guards instead of Pitt police officers for certain situations.

“We formed a People’s Voice Committee that holds the University accountable by putting together African American faculty and students who meet once a week and look at the progress the University is making to meet the students’ demands,” Parks said.

Parks added that one of Pitt’s other strategies to combat racism and inequality on campus was for all senior leaders, deans, vice provosts and chancellors to examine data surrounding diversity and enrollment that is now published on a new social justice website.

“These statistics help us hold ourselves accountable and be transparent to our community. We are trying to create a racially equitable university,” Parks said. “We believe that these numbers will grow and that it is our plan to grow and improve that.”

Increasing Black student enrollment was also one of BAS’s demands. They asked that the University increase the percentage of Black students on campus to 10% in the next five years, with an approximate 1% increase per year, separate from student athletes.

The current percentage of Black students at Pitt is at the end of a large downward trend from the last 40 years. Black students made up about 14% of the student population in 1979, 10% in 1989, 9% in 2000 and 7% in 2010. Pitt received a “D” in the University of Southern California’s annual report card on the representation of Black students at public colleges and universities.

Parks said Pitt’s senior leaders also listened to Black professors, staff and students’ experiences of what it’s like being Black at Pitt. She said Pitt made the commitment to be an “anti-racist” school following these discussions.

“One such commitment the University made was becoming an institution that was truly anti-racist,” Parks said, “by looking into how we are teaching, how we are doing research, the impact of our research, how we are recruiting faculty and staff, how we are hiring and how we are buying and building at Pitt.”

Cudd said Pitt is also addressing racial injustice on campus through measures such as the new anti-racism class introduced this semester. The course is asynchronous, free of charge and graded on an S/NC basis. Its adoption follows a summer petition from Pitt alumnus Sydney Massenberg that gathered more than 7,000 signatures urging Pitt to change its general education requirements to mandate a Black studies course.

“We wanted to make our curriculum more engaged and inclusive to the Black narrative,” Cudd said. “So we created a class that consisted of a series of lectures on systemic anti-Black racisms and the anti-racists measures that we can take to end it.”

Cudd added that this class will hopefully help solve some injustices on campus.

“This is an opportunity we seized for furthering the cause for social justice and building the community,” Cudd said. “The students who are taking this course for the first time and those who are teaching the course are becoming part of a historic transformation.”

When asked by students about what Pitt’s plans are to retain Black students once they get accepted to Pitt, Cudd said the University is working on making Pitt’s classrooms more inclusive and the University more affordable.

“This is something we definitely need to improve on — helping our faculty learn how to make their classroom more inclusive to improve belongingness and to reduce the amount of racism that may be in place,” Cudd said. “Part of the issue for a lot of students is financial issue and we are also trying to work on that.”