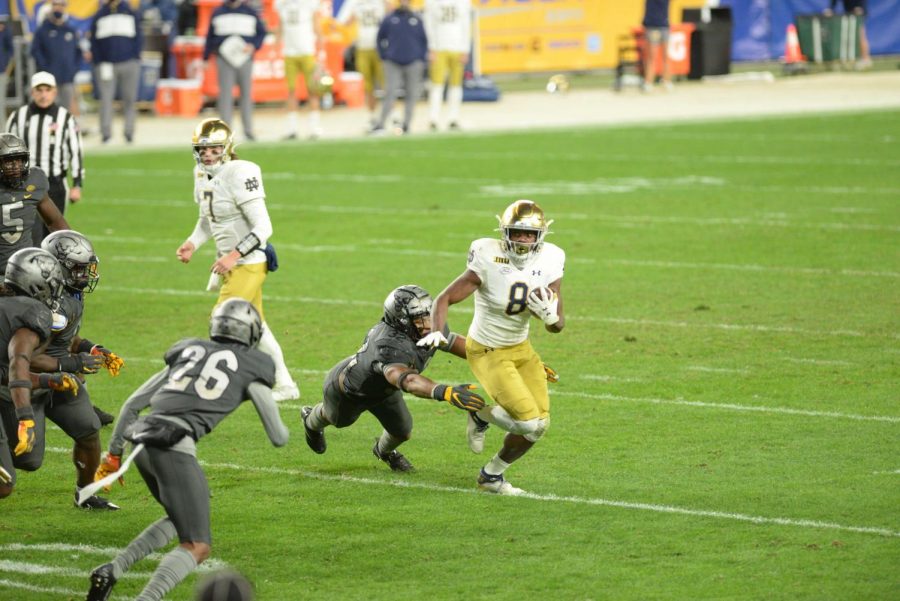 Notre Dame outgained Pitt 434 to 162 in total offense Saturday, handing the Panthers their fourth consecutive loss in a 45-3 beatdown.

Pitt hosted fans at Heinz Field for the first time this season Saturday, but many of them likely wish they had stayed home. The Panthers (3-4, 2-4 ACC) received an old-fashioned 45-3 beat down at the hands of No. 3 Notre Dame (5-0, 4-0 ACC), their fourth consecutive loss.

Two weeks after injuring his left ankle at Boston College, Pitt senior quarterback Kenny Pickett missed his second consecutive game on Saturday. Redshirt first-year Joey Yellen, who threw for 277 yards in his debut against Miami, received the nod against Notre Dame. Pitt head coach Pat Narduzzi said he expects to see Pickett back on the field this season.

“Hopefully sooner than later,” Narduzzi said. “He was out there today and he had a good week, he’s doing really well. We’ll see. Might be a stretch for Florida State, I don’t know, but we’ll see.”

Despite the final score, this matchup screamed low-scoring affair the entire week. Pitt’s offense has struggled to put points on the board the whole season, and the absence of Pickett amplified the weak rushing attack. Notre Dame, although bolstered by a stout defense, could only put up 12 points last week against Louisville.

The Panthers and Fighting Irish didn’t showcase the best of their defensive abilities when the game began, though. Irish graduate quarterback Ian Book marched down the field by himself on Notre Dame’s first drive, throwing for 60 yards and adding 19 on the ground. Book found fellow grad student Ben Skowronek wide open in the middle of the field for a 34-yard opening score. Redshirt senior linebacker Chase Pine said big plays have hurt the Panthers throughout the year.

“[We’ve been missing] discipline, details,” Pine said. “They made better plays than we did.”

Yellen got himself in rhythm quickly, looking pretty comfortable in the pocket on Pitt’s first drive. He connected with redshirt senior wide receiver Tre Tipton and junior Shocky Jacques-Louis on third-and-long plays to move into Irish territory. A couple of drops by Pitt receivers stalled the drive, and senior placekicker Alex Kessman drilled a 45-yard field goal to put Pitt on the board.

The notorious Panther defensive line found its swagger midway through the first quarter. After a face mask penalty by Pitt redshirt junior safety Paris Ford gave the Irish a first down, the Panthers stopped two runs behind the line of scrimmage to force a punt. Pitt’s offense gave the ball right back with a three-and-out, but the defensive line unit came up with another stop by forcing Book out of the pocket.

Pitt’s defensive line kept making plays, but this season’s coverage woes showed up again for the Panthers. After Pitt redshirt senior linebacker Phil Campbell III sacked Book to set up third and long, Skowronek embarrassed Pitt’s secondary for his second touchdown reception of the day. The 6-foot-2 receiver skied over 5-foot-9 cornerback Marquis Williams to make the grab, then blew by redshirt sophomore Erick Hallett for the 73-yard score. Notre Dame took a 14-3 lead with eight minutes to play in the first half.

“We brought pressure, we hit the quarterback right as he released it,” Narduzzi said. “You got a [taller] receiver on a smaller corner. I think, a little push off, whatever, a little lean on a guy, and number 11 makes a big play. And then Erick came out of the middle of the field and he’s got to finish it up and at least give us another yard to stay in down there.”

Right as the Panther defense regained its footing, a costly mistake from Yellen deflated any potential momentum. Yellen threw a dangerous pass up the middle, which was picked off by Irish junior linebacker Bo Bauer to give Notre Dame optimal field position. Book led the Irish to the goal line, and sophomore running back Kyren Williams punched it into the end zone.

Pitt had one last opportunity to get some sort of offensive production going before halftime. Sophomore running back Vincent Davis picked up a quick first down, but three ineffective plays after brought Pitt’s special teams unit on the field with 20 seconds remaining. Notre Dame defensive end Isaiah Foskey blocked the punt, before recovering the ball in the end zone to give the Irish a 28-3 lead heading into the break.

The offense didn’t look any better in the second half. A quick punt on the group’s opening possession resulted in a Notre Dame field goal. Bauer picked off Yellen’s dangerous pass a few plays later, leading to another Book touchdown pass. Yellen threw another interception on the next offensive play, which brought his night to an end as Narduzzi pulled him out of the game. The first-year quarterback completed 10 of his 27 passes for 101 yards with three interceptions.

The Irish capitalized off the turnover, with junior C’Bo Flemister’s touchdown run giving the Irish a 45-3 lead late in the third quarter. Both teams subbed in their backup quarterbacks, with redshirt first-year Davis Beville taking the snaps for Pitt. Beville’s time was short lived — he played one possession before the Panthers put in redshirt sophomore Nick Patti for the scoreless fourth quarter.

The Panthers once again had a forgettable performance on the ground, posting 44 yards on 20 attempts. With a 22-yard performance against Miami, Pitt has averaged just 1.4 yards per carry in its last two games. Redshirt senior offensive lineman Bryce Hargrove credited Notre Dame’s stout defensive line for shutting down the Panthers run game.

“A number of things made it difficult,” Hargrove said. “They’re a good team. We didn’t perform how we’re supposed to.”

Book, who had only thrown three touchdowns this season before Saturday, finished with a season-high 312 yards and three scores on 30 passes.

Pitt now enters its bye week, so it will have two weeks to prepare for a road matchup against Florida State on Nov. 7.