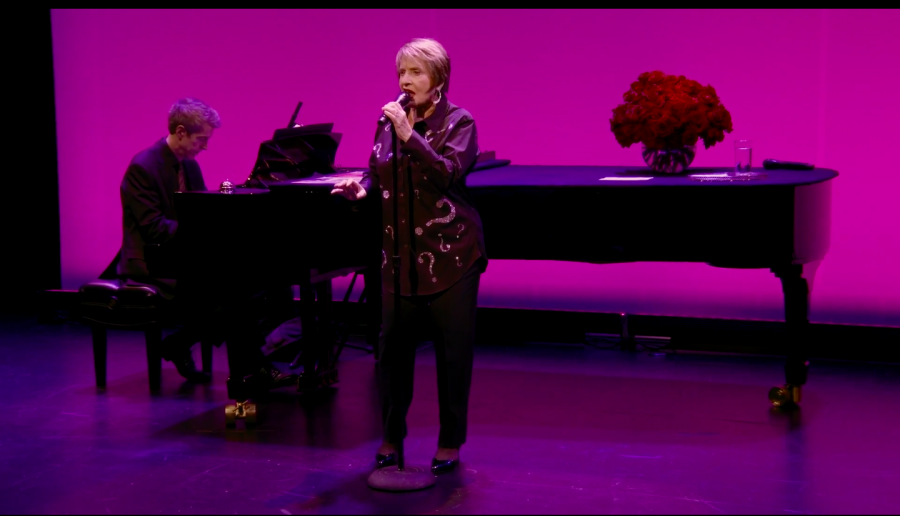 “Some people can thrive and bloom / Living life in the living room,” Patti LuPone sang at her virtual concert Saturday night. The line is part of the song “Some People” from the musical “Gypsy,” but it also accurately describes the lives of her viewers amid the pandemic.

The concert was part of the “Live from the West End: Women of Broadway” series of virtual concerts, filmed live from the Shubert Virtual Studios in Manhattan. Just under two dozen nonprofit arts organizations, including the Pittsburgh Cultural Trust, have collaborated to produce the concert series. Upcoming performances in the series will feature Laura Benanti on Nov. 14 and Vanessa Williams on Dec. 5.

LuPone, an iconic singer and actress, originated the eponymous role of “Evita” in 1980 and received her first Tony nomination for the role. Other famous roles of hers include Mama Rose from the 2008 revival of “Gypsy,” which she also won a Tony for, and Joanne in the recent revival of “Company,” which she was still performing when theaters on Broadway shut down in March. Given her extensive history performing, it’s no surprise she gave an amazing show with little more than her voice.

LuPone performed songs from some of the shows she’s appeared in, as well as songs from other shows such as “South Pacific,” “Sweet Charity” and “Oklahoma.” However, she didn’t stick to songs written for characters who are women within her age and voice range.

As she explained in asides about her life between songs, there were many songs she wanted to sing over the course of her career, but could not due to being the wrong age or gender. LuPone took this concert as an opportunity to perform songs like “Something’s Coming” from “West Side Story” — which the male character, Tony, typically sings. Her performance of male parts proved a lot of fun and meant she could perform a larger repertoire than if she had stuck to songs in her vocal range.

In some cases, she even sang both parts of a duet, such as in “A Boy Like That/I Have a Love,” also from “West Side Story.” This resulted in her rapidly switching between both parts, something any musical fan who’s tried to sing along with multiple parts of a song at once can relate to. The effect was hilarious to see on stage.

The set for the performance was very simple, with an LED background that changed colors depending on the mood of the song, a single microphone and composer Joseph Thalken playing a piano with a vase of roses atop it. Thalken was also the music director for the evening and provided harmonies as needed. Although he didn’t sing much, his voice was lovely and his accompaniment stellar.

LuPone has had a long, 47-year career on Broadway, and during the performance, she showed off the magnificent singing voice that has won her many awards. Even when using a microphone, Broadway singers tend to project their voices as loudly as possible. Simply watching the recording, it was easy to tell LuPone was projecting because I had to turn the volume down whenever she belted.

But LuPone’s voice is gorgeous overall and is able to switch between soft and gentle or loud and brassy at a moment’s notice. One of the songs she performed, “Another Hundred People,” is considered one of the hardest Stephen Sondheim songs to sing, but she makes it seem effortless.

She also showcased many classic songs and composers like Cole Porter, Stephen Schwartz and Rodgers and Hammerstein. The evening was a wonderful showcase of older songs — nothing from a show that premiered before 1990. It’s a nice treat for newer fans who got into musicals through recent shows like “Hamilton” and “Hadestown” who might not have branched out into older shows.

On top of displaying an amazing voice, LuPone was also very witty and charming as she described anecdotes from her life. She talked about growing up listening to songs from “Sweet Charity,” her first callback, and shows she starred in that flopped. She said she often found herself wanting to sing the songs performed by characters she wasn’t playing.

LuPone also had hilarious deadpan reactions to the audience questions, which viewers from home were able to send in via email. When asked if she ever got tired of singing “Don’t Cry for Me Argentina,” the most famous number from “Evita,” she dryly said, “There are very few things that you can do for 41 years that you still look forward to with the same enthusiasm the first time you did it … some nights you’re really into it. Other nights, not so much.” She then performed the song.

All of the songs LuPone performed, and some of her asides, came from a previous concert she performed in Northport Long Island and appear on the 2017 album “Don’t Monkey with Broadway.” That performance also included more songs than she performed on Saturday.

At the beginning and end of the show, LuPone commented on the awkwardness of performing without an audience and her sadness, having worked in the musical community for decades, at seeing Broadway shut down due to the COVID-19 pandemic.

Nonetheless, LuPone kept her spirits up while performing, providing a performance that was a touching and hilarious send up of the classic shows and composers who filled her early life and career.