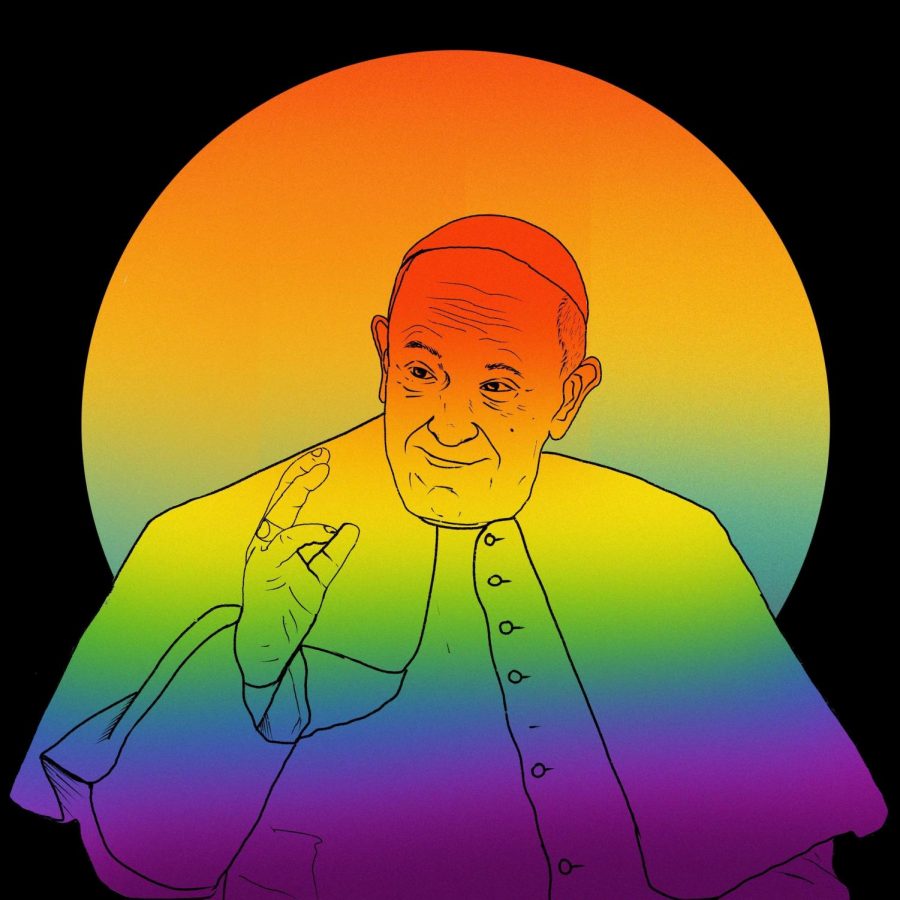 When marriage equality was passed in June 2015, I had just finished my first year at a private Catholic high school and was working as a receptionist at my local parish center. Despite my connection to my faith in nearly every aspect of my life, there was always one whopping obstacle in my way — my sexuality.

Navigating Catholicism as a closeted gay woman was, to put it lightly, a challenge. In my eight years of Catholic schooling, I studied the seven sacraments, including those, such as marriage, that I knew my sexuality would prevent me from receiving. I watched those around me openly endorse and support Vice President Mike Pence for his connections to conversion therapy. We “debated homosexuality” — arguing for or against this undeniable facet of my identity like it was a preference for Hawaiian pizza. I saw people in genuine shock that Pope Francis would promote “compassion” for those with a “homosexual tendency.”

I eventually settled on the idea that these two facets of my identity — Catholicism and queerness — would remain separate. I settled for being “tolerated” by many in the church, and accepted that I may not even get that courtesy from others. This juxtaposition has largely kept me from engaging with Catholicism after graduating high school.

After more than three years spent mostly avoiding churches, I was shocked to hear Pope Francis, the leader of the Catholic Church, advocate for same-sex civil unions in the new documentary “Francesco,” which premiered Wednesday at the Rome Film Festival.

“Homosexual people have the right to be in a family. They are children of God,” the Pope said. “You can’t kick someone out of a family, nor make their life miserable for this. What we have to have is a civil union law, that way they are legally covered.”

This statement means a lot to people who have felt alienated or isolated in the church because of their sexual orientation, to people who have been scorned by “well-intentioned” congregation members, to people told they’re “going to hell,” to people who feel they must choose between authenticity and faith, to people like me. Critics argue the Pope’s comments either go too far or not far enough, but regardless, the Pope is sending a clear message of tolerance, care and love that, I hope, will trickle down to members of the church who have yet to mirror his compassion.

The church’s anti-LGTBQ+ or outright homophobic stances are widely known, largely accepted and well documented. These teachings are clearly outlined by the United States Conference of Catholic Bishops’ 2006 guidelines for “Ministry to Persons with a Homosexual Inclination.”

“The Catholic Church has consistently taught that homosexual acts ‘are contrary to the natural law … Under no circumstances can they be approved’ … Homosexual practices can arise among people who erroneously workshop the creature rather than the Creator,” the guidelines said. “Although one would be morally culpable if one were voluntarily to entertain homosexual temptations or to choose to act on them, simply having the tendency is not a sin.”

In short, the Catholic Church doesn’t believe queer people are sinners for being queer, but rather, we have strayed because we refused to completely deny this facet of our identity.

This mentality has permeated nearly every aspect of the Catholic Church — from different diocese, to schools, to homes. Aaron Bianco, a gay pastoral associate of St. John the Evangelist Parish in San Diego, was forced to resign in 2018 after he had his tires slashed, received death threats and was attacked outside of the church. This violence escalated when “no fags” was spray-painted in the parish’s conference room and Bianco’s private information, such as family photos and home addresses, were published online. Between 2007 and 2018, approximately 90 people lost their jobs based on LGBTQ+-related disputes with the church.

This situation goes beyond the workplace. A 2018 study by researchers at the University of Texas at Austin found increased value of religion correlated with increased odds of suicidal thoughts or attempts among LGBTQ+ students. They concluded that religion-based services for mental health crises may not be beneficial to LGTBQ+ students and religious advisers should “actively assure their services are open and supportive” of LGBTQ+ individuals, particularly youth.

What I don’t understand, however, is the blatant disregard and disrespect for members of the congregation who refuse to completely deny and ignore their sexual orientation. And it seems the Pope doesn’t, either.

For queer Catholics who have felt ostracized by the church, Pope Francis’ words are more than a symbolic call for kindness. They are a tangible gesture to encourage compassion for those who have received little to none. It’s a statement that queer people should be able to have happy, healthy and fulfilling relationships, even if the church itself won’t recognize those unions. It’s a clear note that the hate toward LGBTQ+ Catholics goes directly against the doctrine they are claiming to enforce.

I don’t think I will ever get to be married in a church — and, quite frankly, I don’t care to be. But I would like to feel safe and welcomed in a space designed to be safe and welcoming. I want to be able to be a messy bundle of queer and Catholic and unapologetically human, and I appreciate Pope Francis’ call encouraging me to do just that.