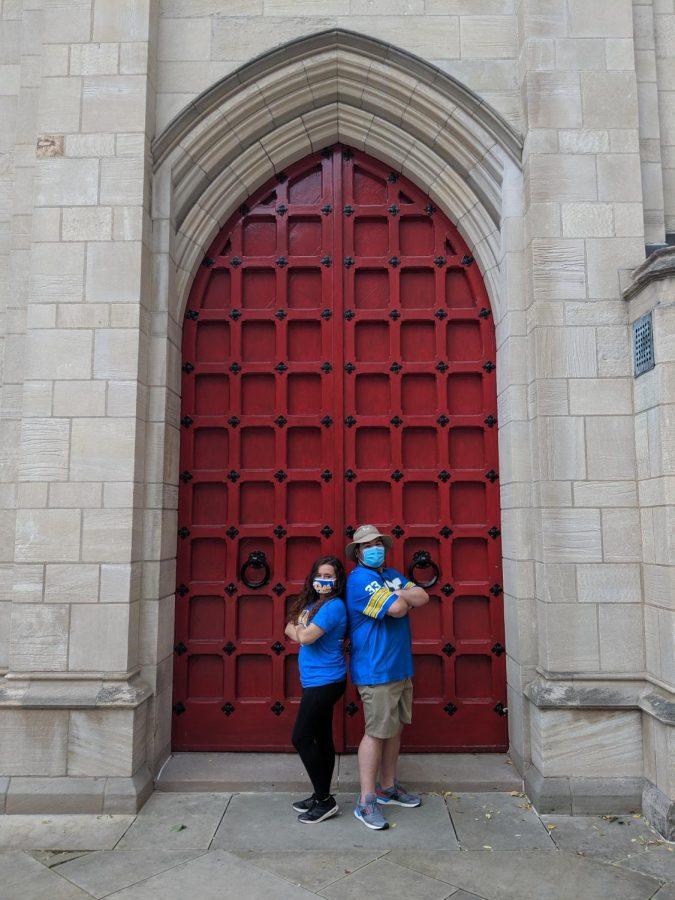 The Student Alumni Association announced Saturday morning that Alexis Zito and Jonathan Perlman are this year’s Spirit of Pitt winners.

When Alexis Zito told her dad in early September she missed attending typical college events during her senior year, he told her to imagine how the homecoming winner would feel not taking part in the tradition of walking out on Heinz Field.

Zito replied to her father, who had no idea she had made it onto this year’s homecoming court, on Saturday with a text saying she no longer had to imagine — it was her.

New this year, the Spirit of Pitt Award has replaced the traditional titles of homecoming king and queen, a decision made by the PItt Alumni Association to cater to the University’s diverse student body. Perlman says he appreciates the steps Pitt has made to be more inclusive, which he believes can encourage people involved in organizations usually underrepresented on the homecoming court to run for it.

“There’s no one definition of who is the face of Pitt, it should and could be anyone, which is an important thing,” Perlman said.

According to Luke Profy, the vice president of traditions for the Blue and Gold Society and a senior mathematics and classics major, more than 30 students filled out the application to campaign for homecoming court. Students interested in applying submitted a personal statement and answered a variety of short-answer questions on topics such as Pitt pride and dedication to service.

A committee — including Profy, members of the Pitt Alumni Association and the PAA equity and justice task force, Student Government Board President Eric Macadangdang and Blue and Gold Society president Matt Jankowitz — narrowed the applicant pool down to 20 candidates. The committee selected these students based on criteria such as how they exemplify Pitt Alumni Association values and their contributions to campus life. The students then ran and campaigned for the Spirit of Pitt Award.

Voting for homecoming court by the student body opened on Oct. 19 at noon and lasted 24 hours. SAA announced the candidates elected to the homecoming court, which consisted of the top 10 students with the most votes, on Tuesday.

Zito said she and Perlman didn’t know each other prior to making it through the application process to campaign for homecoming court. But seeing they were the only two engineers selected, they decided to run together.

“We just thought, ‘OK, we’re both engineers, we’re both from a similar background in academics,’” Zito said, “and we kind of wanted to show that, yeah, you can be an engineer and you can do academics, but you can also get really involved on campus.”

According to Zito, she and Perlman racked up 22 sponsorships from student organizations, several of which they belong to.

Zito serves as vice president of the Society of Women Engineers and is a sister in the engineering sorority Phi Sigma Rho. She also is a member of American Society of Mechanical Engineers, the Formula Society of Automotive Engineers, Pitt Dance Marathon, Pitt Outdoors club, Pitt Ski and Snowboard club as well as a brand ambassador for the Outside the Classroom Curriculum and an Engineering Ambassador.

Perlman said he focused particularly on making an impact outside of the classroom throughout his time at Pitt by becoming a board member of Engineering Student Council, American Society of Mechanical Engineers, Zeta Beta Tau, a member in the leadership society Omicron Delta Kappa, a member of Jewish organizations Hillel and Chabad and a mentor in the Pitt Makerspace. He also completed the Outside the Classroom Curriculum.

Originally from Long Island, Perlman said he didn’t see himself coming to Pitt in high school, although now he can’t imagine himself anywhere else. When asked to describe his Pitt experience in one word, Perlman, who said things didn’t really fall into place until his sophomore year, called it “unexpected.”

“If you told me freshman year I’d be the Spirit of Pitt, I probably wouldn’t have believed you,” Perlman said. “Around sophomore year, that’s when I was like, ‘OK, maybe I can do this,’ and became more well-known on campus.”

Students might recognize Perlman as one of the painted shirtless bodies in the front row of football games that spell out words of encouragement. According to him, he has not missed a single football game while on campus since starting his first year at Pitt, a pursuit that has resulted in his picture appearing in major sports news outlets like ABC and ESPN more than 40 times.

Zito said her relationship to Pitt started before she was even born — both of her parents went to Pitt, met at Pitt and got married in Heinz Chapel. Zito, who attended high school at Pittsburgh Science and Technology Academy — located between Litchfield Towers and Benedum Hall — said she practically grew up on Pitt’s campus. According to her, she decided to attend the University because she believed it would give her the opportunity to extensively pursue both academics and extracurriculars.

“When I was staying outside [in high school] I would watch all the college students walk by and they always looked so happy,” Zito said. “I felt that Pitt allows you to do what you love academics-wise, but also get involved in your hobbies on the side. I think Pitt just has the opportunity to allow you to do it all and do everything that you absolutely want.”

Throughout her college experience, Zito, who commuted during her first three years and worried about making friends, said she has loved Pitt’s feeling of the community the most, especially while singing “Sweet Caroline” at football games.

“No matter if it’s a friend or a stranger sitting next to you, you always put your arms around each other and sing together and I really love that,” Zito said. “I feel like it really gave the sense that Pitt is a community, a family.”

In honor of winning, Perlman and Zito each received a glass plaque with a little mirror on it that said “Spirit of Pitt Award Recipient,” a $1,500 scholarship and tickets to the homecoming game, which, due to coronavirus restrictions, only allowed 1,000 students to attend.

While most on homecoming court wore dresses or suits and ties, Perlman chose to wear a blue Tony Dorsett jersey — which just so happened to be the clean jersey he had — under a navy blazer.

“Game day comes first, and I didn’t think we had time to change [before the game] … so I was like, ‘I’m not going to wear a suit and tie if I have to go to the game right after,” Perlman said. “But it still looked good, I think it pulled off well.”

Zito said attending her last Pitt game as a student felt sentimental, despite the change in atmosphere from the games she has attended in the past.

“I kept thinking back to that first Pitt game, and I just kept replaying in my mind walking down the steps completely surrounded by people,” Zito said, “and even though it was so different, it was still so amazing to be there because although people weren’t screaming as much, they were still pounding on the chairs, still excited.”

Both Zito and Perlman, neither of whom expected to be named the Spirit of Pitt, said their achievement didn’t hit them until after the ceremony. After the football game, they both celebrated with a few of their friends. Then, Zito headed over to Perlman’s apartment, where the two, strangers not even a month ago, popped bottles of champagne in a North Oakland living room.

Though she didn’t get to walk on Heinz Field, Zito said her celebration was still something.

“I felt happy to be there and to still get to celebrate,” she said, “and it was nice to celebrate with Jonathan, too.”