No. 10 Pitt volleyball splits season finale series with No. 6 Louisville 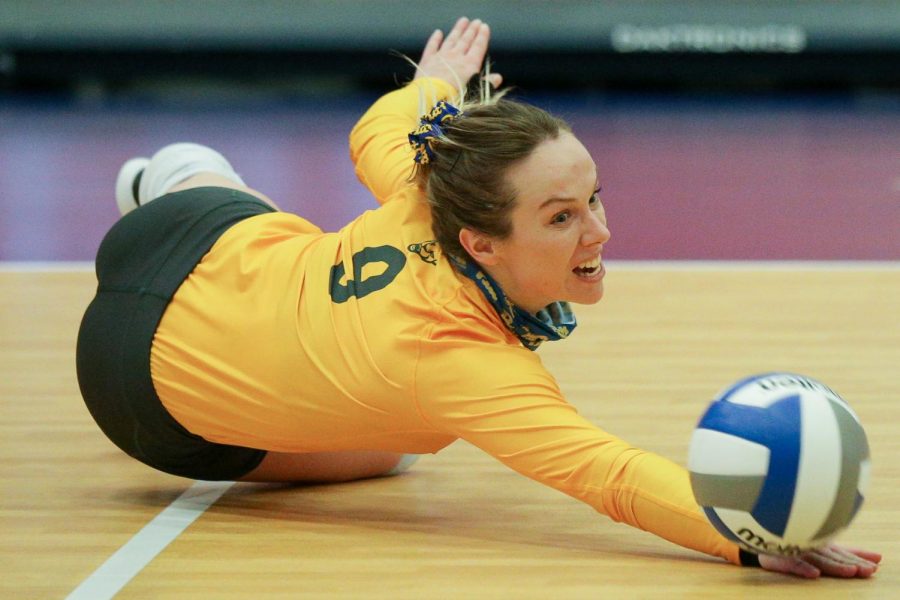 Senior libero Marija Popovic (9) dives for the ball during Pitt's 3-0 win over No. 6 Louisville on Friday.

No. 10 Pitt volleyball held its own in its final — and perhaps hardest-fought — series of the fall season. The Panthers swept No. 6 Louisville Friday night and brought Sunday’s game to the brink in a disappointing 3-1 loss.

Although the Cardinals managed to finally break Pitt’s 37-game win streak at Fitzgerald Field House, the streak was not given up without a fight — of the seven sets played this weekend, none were decided by more than four points.

“We didn’t relax, we were very tense because Louisville’s a really good team,” Ndee said. “We weren’t expecting them to lie down and give us the game, so we knew we had to go out and take it.”

With the anthracite “Steel City” jerseys making their debut Friday, and with a small crowd and pep band being present for the first time this season, Pitt fed off the fans’ energy in its first match. The opening set immediately turned into a dogfight with 16 ties, yet the Panthers simply toughed it out to win 26-24.

The following set proved to be the most lopsided of the series, with Pitt winning 25-21 on a service error by the Cardinals. That said, the Panthers were hardly comfortable after going up 2-0, especially with the memory of last week’s Notre Dame comeback fresh in their memories.

Fortunately, redshirt freshman outside hitter Valeria Vazquez Gomez refused to allow Louisville back in the match. Her gutsy play in the third set helped the Panthers eke out a 25-23 win, and her 10 kills proved crucial in the victory.

“The coaches tell us all the time, win the long rally,” Vazquez Gomez said. “I think applying that to the game, and actually executing it, I think we could’ve done better, but we did it and that was an improvement.”

Friday’s match was one of Pitt’s strongest showings this season — the team stayed cool, maintaining its balance throughout shifts in momentum. The Panthers also benefited from their depth, with Vazquez Gomez and sophomore middle blocker Chiamaka Nwokolo making important contributions.

Sunday’s match, on the other hand, was equally entertaining — yet it did not see the same favorable end result for the Panthers. Pitt fell to an early 2-0 deficit in similarly close sets, and a comeback attempt fell short in the end.

Head Coach Dan Fisher noticed some differences between his team’s performance in the two matches, but blamed this loss on lots of small errors.

“We started out serving a little soft, got better there, but overall they just hit for a much higher percentage,” said Fisher. “Defensively, after that, we just couldn’t keep them to a low enough percentage. Still, every game was such a low margin there’s no one big takeaway, there’s just a bunch of little things we have to work on.”

Sunday’s first two sets followed a similar storyline to Friday’s first two, but this time the roles were reversed. Louisville and Pitt went toe-to-toe in the first set, but the Cardinals eventually strung together an ace and a Pitt attacking error to take the first game 26-24.

The second set went decidedly in Louisville’s favor, with the Cardinals utilizing a .379 hitting percentage to take an early lead and hold on. Pitt lost that game 25-22 as a late rally fell painfully short.

Louisville was unable to finish Pitt in the third set, however, as the Panthers soared to a 25-22 win. The Cardinals were held to an abysmal .158 hitting percentage, and Pitt’s star senior outside hitter Kayla Lund bludgeoned them with a series of powerful kills.

Entering the fourth set, both teams were clearly aware they had hit crunch time. The game was a gritty affair from start to finish. Louisville utilized its height advantage to dominate at the net as the Panthers fought desperately to break through on long rallies.

“Our mentality is just staying tough and being anti-fragile,” said Starks. “I think we didn’t want to get down early, so we just wanted to keep our lead, and I was just focused on blocking.”

Fortune would not play out in Pitt’s favor, though — and nor would the officials. As the fourth set reached a climax, Lund fired off another powerful kill to give the Panthers a 22-21 lead. It seemed as if all the momentum was now on Pitt’s side, but a lengthy review ended up overturning Lund’s kill. The call would prove to be a dagger, and Pitt ultimately lost the set 25-23.

While Sunday’s result is hardly the finishing touch Pitt was hoping for in this strange 2020 season, the Panthers have done quite well, all things considered.

In fact, Fisher found a silver lining he hardly could have imagined a year ago.

“The biggest accomplishment is that we didn’t have to cancel any games,” said Fisher. “We were one of the only teams that made it all the way through our schedule, so we didn’t lose players to COVID-19. There’s no guarantee of that, I think it’s just a great job by everyone in our bubble.”

The Panthers will return to the court for a postponed spring schedule after the beginning of next semester.