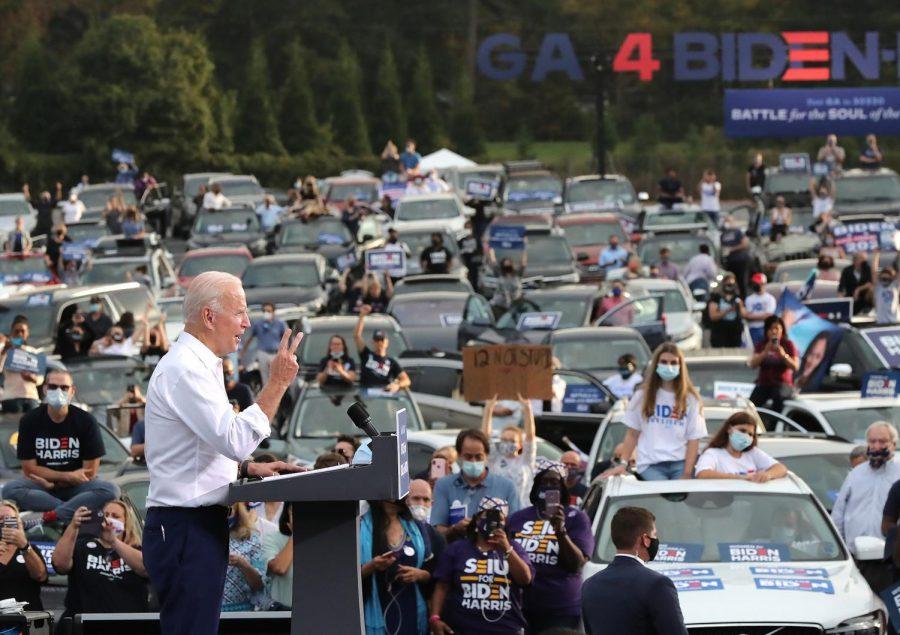 We are officially less than one week away from Election Day.

Some have been waiting for this day since Nov. 8, 2016, the date of the last presidential election, when Donald Trump won the presidency and Republicans won the House and the Senate. That night was shocking, terrifying and frustrating for many Americans. Many of us woke up the next day wishing things were different and that we had done more to ensure a victory for Hillary Clinton and other down-ballot Democrats.

Those of us that are voting for Democrats this cycle don’t want to wake up next Wednesday wishing the same. While casting our ballots for Joe Biden and Kamala Harris as well as other Democrats down ballot is one of the most important things that we can do to ensure Democratic victory, we need to do more. It’s important that in this last week before the election we do our best to donate and organize for our preferred candidates.

I hope that many of us have been organizing within our own circles and through volunteering for organizations or campaigns for a while now, but it’s alright if you haven’t because it’s not too late. This isn’t over until the polls close on Nov. 3, so do your best to talk to your friends and family members who might be on the fence about voting for Biden and other down-ballot Democrats or the people you know that are a bit forgetful. Remind them of the stakes of this election, make things personal for them and convince them to cast their ballots on or before Election Day.

If your circles are full of people who have already voted, or if you just want to do some more in the final days, consider donating and/or phone banking or text banking for Biden or for a Democratic Senate or House candidate. Vote Save America has a great volunteer dashboard, or you can visit individual candidates’ websites for more info on how to get involved in their campaigns. You can get this done from the comfort of your own home, and you can even turn it into a game with friends. I mean, we’re in the middle of a global pandemic, what else have you got to do?

If you’re not sure what down-ballot races you should donate your time to, I’ve got you covered with some suggestions:

It is incredibly vital that we flip the Senate if we have any hope of passing legislation under the Biden administration. Democrats need to hold all their current seats and flip four seats to win the majority. It is likely that Democrats will flip seats in Arizona, with Mark Kelly, and in Colorado, with John Hickenlooper. Obviously it’s worth your time to volunteer in any Senate race in the lead up to the election, but the toss-ups will need your help a bit more in the final stretch.

Sara Gideon is running against Susan Collins, who earned the ire of many Democrats by voting to confirm Brett Kavanaugh despite supposedly being a pro-choice Republican. Gideon is the speaker of the Maine House and is committed to expanding access to affordable health care and protecting pre-existing conditions and freedom of choice. This race is leaning Gideon, so it’s important that we do what we can to ensure her victory in these final days.

Harrison is running against Lindsey Graham in a race that no one thought would be as competitive as it now is. Harrison has broken fundraising records, and this race is considered a toss-up. The last days of voting will determine what happens in this election and can finally eradicate Graham who’s become a gross caricature during the Trump administration.

Cunningham is running in yet another race that’s considered a toss-up. He’s a former state senator and an advocate for education, climate and campaign finance reform. He’s running against Thom Tillis, who’s yet another example of a Republican who has given up whatever limited principles he had to blindly support Trump administration actions and policies.

Greenfield’s race is also considered a — you guessed it — toss-up. Many never thought that this Senate seat would be in play, but Greenfield has been able to put the Senate seat in play. One incredible moment during a debate where Greenfield’s opponent, Joni Ernst, was unable to name the price of soybeans after Greenfield was able to nail the price of corn highlighted Ernst’s disconnect with the state. It’s part of what’s made this race even closer in the final days, so maybe give it a mention when you talk to voters in Iowa.

Ossoff is a former media executive and investigative journalist who’s worked to expose corruption in the United States and abroad. He’s running against David Perdue, who recently racistly mocked the pronunciation of his colleague Kamala Harris’ name. The contrast between the two candidates couldn’t be more clear, and this race is within reach for Ossoff. It’s important that we organize in Georgia in these final days to ensure he wins.

While Democrats are likely to maintain their majority in the House of Representatives, it can never hurt to flip some more competitive seats from red to blue.

Davis is a fighter who famously filibustered the Texas Senate floor for 13 hours to advocate for reproductive freedoms. This race is very close and would be an important win for progressives.

Former Representative Katie Hill, a Democrat, flipped this district in 2018. She resigned in 2019 and a Republican, Mike Garcia, won the special election for the seat. Smith is running to flip that seat back. She’s dedicated her career to education advocacy, affordable healthcare and expanding opportunities for working families.

Hale is running to flip a seat in central Indiana, and it’s shown to be a toss-up in polling, which is surprising for this district. Some see this race as a test for how far traditionally Republican suburbs have moved away from Trump and the Republican party. Hale is a former state representative who’s stressed her commitment to bipartisanship, while her opponent founded her county’s Tea Party group. If she wins, Hale would be the first Latina to represent Indiana in the House of Representatives.

Whatever race(s) you choose to donate to or support through volunteering in this last week, know that you are making a difference in this election and that this work is incredibly important. Convincing just one voter can have a huge impact on a race. To all the Democratic organizers and volunteers out there, as Beto O’Rourke would say, “I’m so f—ing proud of you guys.” Let’s win this thing.