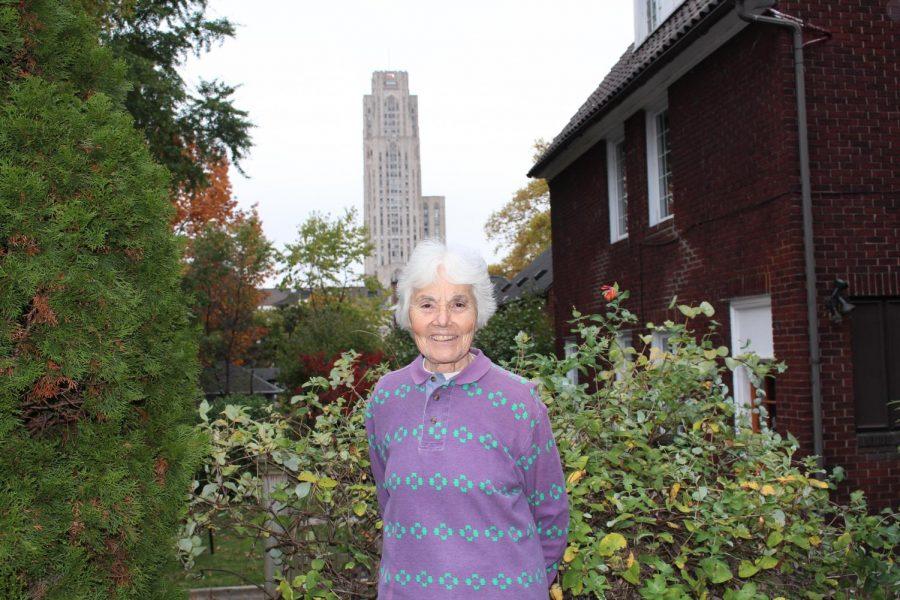 Nora Blithe Runsdorf has been an election judge for the past 39 years for Pittsburgh Ward 4 District 7.

Voters may only interact with them for a few moments when voting, but election judges like Nora Blithe Runsdorf make sure that voters’ voices are heard. She said they all carry the responsibility of helping every person, no matter who they’re voting for, through the voting process.

“All of the judges, even the ones who didn’t know they were one till that morning, end up feeling like, ‘I’m gonna get everybody who’s registered to vote, to vote,’” Runsdorf said. “At the end of the day that’s what I feel like. I go home feeling really good if I know I helped a bunch of students [get] to their correct polling location.”

Runsdorf, an election judge for the past 39 years for Pittsburgh Ward 4 District 7, takes on the responsibility of running her polling location at Soldiers and Sailors Memorial Hall. An election judge is responsible for helping train poll workers and answering all questions that come up and run a fair and clean election on Election Day. Election judges have to be capable of doing every job at the polling location, attend training and run each presidential, state and local election.

Runsdorf said it is a huge responsibility as an election judge to make sure that all elections are fair and the polling location is running smoothly.

“Our responsibility as judges is to make sure that ballots run as efficiently, as neutrally, as cleanly and as perfectly as you can handle several thousand ballots,” Runsdorf said. “The election judge must know how to do each job of the poll workers. Because on an election day, our job is to handle any and every question that comes up.”

Alethea Sims, who has been a poll worker for 55 years, is the election judge for Pittsburgh Ward 4 District 8, which votes in the William Pitt Union. She grew up in a very political time, which she said is how she got involved — Sims was born the same day Rosa Parks refused to give up her seat on a Montgomery, Alabama, bus, and her mother was also a poll worker.

“I grew up in the polls,” Sims said. “My mom worked there, so I was there. By the time I was 10, I was putting people in machines.”

“When I have between four and five thousand people possibly coming in and not everyone is from this area,” Sims said. “You get a new crowd every year and some of the names are long, in a crowded room it is easier for the to say, ‘Can I have something with your name on it so I can see it.’”

When voters show up to the polling station, a poll worker copies the voter’s name down into a numbered list of voters — also known as “the book” — which then has to be duplicated, with one copy sent to the county and the other kept by a poll worker.

Tim Parenti, who went to Pitt for both undergraduate and graduate school, has served as an election judge for the past two years for Pittsburgh Ward 4 District 14, which votes in Posvar Hall. He said this process requires a lot of time management after seeing a poll worker struggle during the primaries in April.

“During the primary, the person who started filling out the duplicate book got behind,” Parenti said. “And she stayed a good hour and a half [working on the duplicate book] after we were done taking everything down at about 8:40 [p.m.].”

Under Pennsylvania Act 77 of 2019, all voters will record their ballots this year on pen and paper, unlike previous years when voters could use machines. With that comes more work for the election judges, Runsdorf said, as they have to account for every single ballot, even those that are unused.

“The ballots come in packets of 50, and you open the packets one at a time,” Runsdorf said. “Because every package that has been opened has to be counted, if you don’t use all of the ballots, the unused ones must also be counted and recorded, because every single ballot must be counted.”

Runsdorf said she is exhausted at the end of an election day, particularly after the April primaries, as part of being an election judge means being on your feet for the entire day.

“I had been on my feet all day, 14 hours, masked and gloved. On [Election Day], we’ll all be masked and gloved,” Runsdorf said. “I sat down at the end of day and we were in Posvar, and when I got up to walk home, I didn’t think I was gonna be able to make it home, essentially four blocks. To take a step was painful.”

Sims also said she feels drained at the end of the day and goes right home to bed.

Runsdorf said students will not be allowed to vote if they go to the wrong polling location, which is why she suggests students remain at the same polling location for their entire time at Pitt.

“I encourage [the students] in Nordenberg Hall, leave your registration there,” Runsdorf said. “How many times a day do you pass Soldiers and Sailors, you can always vote here. When you graduate and leave, then change your registration. But as long as you’re a student, leave it at the same place, because that makes it so much easier.”

Parenti said it has been hard to prepare Posvar Hall as a polling station with the COVID-19 regulations in place.

“A lot of what you’re going to see, especially at our locations in the Union and Posvar, is a complete separation,” Parenti said. “There will be one door at each of our locations for voters [that keeps the voters separate from the students entering the building.]”

Runsdorf said voting is the best way to make sure your voice is heard and believes voting is so important for your community.

“Voting is important,” Runsdorf said. “I really do believe somewhere deep inside of me that no matter what else we do as an individual, this is the only time you ever get to say something about what is going on.”