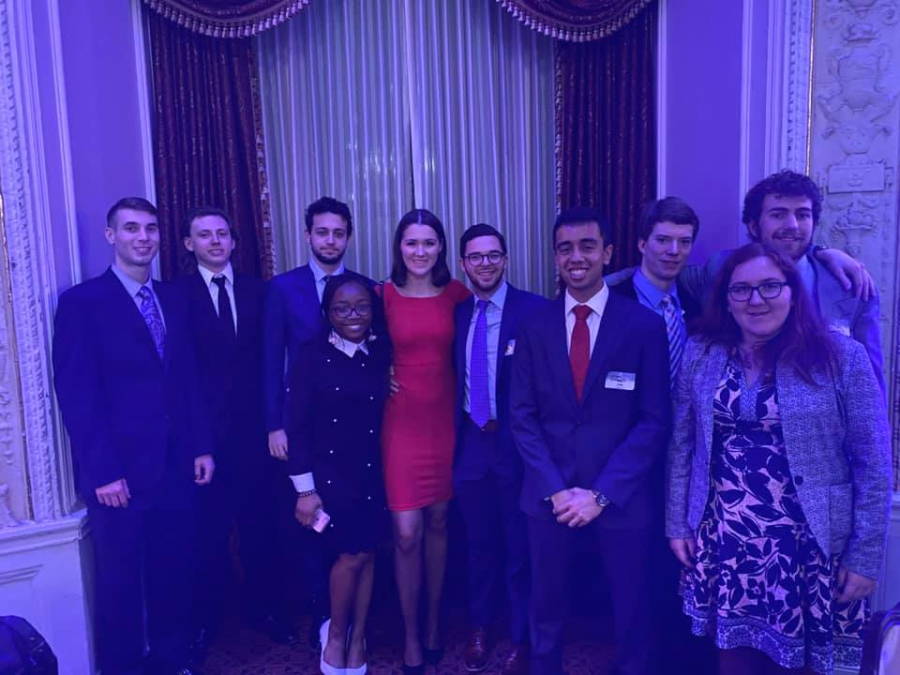 Members of Pitt College Republicans at the 2020 Lincoln Dinner in February.

With election season in full swing, Elizabeth Oresanya, the president of Pitt’s College Republicans, said the group has acted as a “pseudo-Pitt for Trump” group on campus, although it focuses more on local and state races.

”Speaking to the campaign representatives that have spoken to us, we’re much more useful as a College Republicans group that campaigns for the Trump team, more than a ‘Pitt for Trump’ group,” Oresanya, a junior accounting and finance major, said.

Democrats, on the other hand, formed Pitt for Biden in April to handle many campaign-specific initiatives. The group is dedicated to supporting Democratic presidential candidate Joe Biden by educating students on Biden’s policies, hosting discussions with political figures and helping register new voters.

Both political parties are seeking to help their respective candidates gain Pennsylvania’s 20 electoral votes. Pennsylvania is one of the most important swing states in the country, with FiveThirtyEight’s presidential race forecast giving President Donald Trump an 84% chance of winning the presidency if he carries the state, and Biden a 96% chance of winning if the state flips blue. With poll averages showing Biden leading Trump by about 5% in Pennsylvania, the race for the state’s electoral votes is likely to be tight.

A group at Pitt solely dedicated to reelecting Trump isn’t necessary, according to Corey Barsky, vice president of the College Republicans, because the president’s campaign team has its own “surrogates” — such as the Trump Victory Committee — that do most of the grassroots campaigning in local communities and suburbs. He said this gives the College Republicans more time to focus on down-ballot candidates.

Barsky, a senior neuroscience major, said another reason a “Pitt for Trump” group probably doesn’t exist is because of the members of the College Republicans’ various backgrounds. Barsky said members fall into different categories of Republican beliefs, from ”more populist Republicans” to “Reagan Republicans.”

Oresanya said members don’t agree with the president on every issue.

The Pitt News contacted multiple members of the College Republicans for comment, but they did not reply. Oresanya and Barsky did not answer requests to speak with other members.

But Oresanya and Barsky said they both think the majority of the College Republicans strongly support Trump in the upcoming election.

“It’s definitely a diverse range of ideas,” Oresanya said. “But by and large we’re pretty satisfied with his performance the first three and a half years, and we’re really excited for what else is left.”

Barsky said the group supports the current president for a variety of reasons, especially because of his policies involving the judiciary.

“I would say the one major issue that all of our members agree on and are interested in is the judiciary,” Barsky said. “We are for conservative, textualist judges, those being on the federal level and also on the Supreme Court.”

The Monday vote was the closest Supreme Court nomination ever to a presidential election, according to the Associated Press, and the first in generations with no support from the minority party. Democrats argue that Barrett is “illegitimate,” due to a rushed vote just days before the election, and compare her treatment to Merrick Garland, who President Barack Obama nominated months before the 2016 election but did not receive a hearing from the Republican-controlled Senate.

Oresanya said the group is generally pleased with Barrett, who she claimed is a “major selling point” for voters. A slim 51% majority of Americans support Barrett to fill the Supreme Court seat left open due to Ruth Bader Ginsburg’s death, according to a recent Gallup poll.

“Having seen Neil Gorsuch, Brett Kavanaugh and now Amy Coney Barrett, we’re very, very happy with his choices in Supreme Court justices and we’re really glad to see that that promise has been upheld without fail,” Oresanya said.

Besides the judiciary, Oresanya said she thinks Trump has other successful policies, such as tax cuts. Trump and congressional Republicans passed the Tax Cuts and Jobs Act of 2017, which lowered income tax rates, especially for higher-income Americans, and it lowered the corporate tax rate from 35% to 21%.

“One of the things that’s been really important — especially for young people entering or hopefully entering the job market — is the tax cuts and seeing how a pro-business administration has not only helped businesses, but also helped individuals to enter their careers and to excel,” Oresanya said.

IRS data on the 2018 tax season released in May 2019 showed that savings for taxpayers were uneven. Low-income families received the least savings, while high-income families saved the most. Corporations paid 22.4% less income tax, and their refunds increased by 33.8% nationally.

Oresanya added that although she is confident in Trump’s ability to win, she is concerned by what she sees as a lack of transparency in how votes are counted.

Oresanya said she thinks all voting should be finished on Election Day and worries about how election disputes will be handled. The Supreme Court will allow Pennsylvania to count mail-in ballots received up to three days after Nov. 3, rejecting a Republican-led lawsuit. The justices upheld a state Supreme Court ruling that required county election officials to receive and count mail-in ballots that arrive up until Nov. 6, even if they don’t have a clear postmark, as long as there is no proof a voter mailed their ballot after the polls closed.

Due in part to the COVID-19 pandemic, more people than ever are likely to vote using absentee or mail-in ballots or by taking ballots they’ve filled out at home to a drop box or other secure location, according to the Pew Research Center.

“That’s definitely worrisome because voting should be done on voting day,” Oresanya said.

“That’s an important race just in terms of the implications for that in Pennsylvania as a whole,” Barsky said. ”People are looking at that race to see, as a bellwether for two national candidates, to see how they are both going to fare in this district and I think that’s a key race to look at.”

Parnell supports reopening the economy during the COVID-19 pandemic, as well as an expansion of fracking and coal. He criticized protests following George Floyd’s killing and those who want to remove statues as “enemies” seeking to “destroy America from within,” though he said he wants justice for Floyd. Parnell also is strongly pro-life and said the country doesn’t need more gun control laws.

Lamb, a veteran of the U.S. Marine Corps, voted for legislation in March that spent about $2.4 trillion on COVID-19 relief, and he supports another package for unemployment benefits and small business aid. He believes in law enforcement reform and said he supports the protests following George Floyd’s killing, but condemned violence at some demonstrations. Lamb also supports fracking and construction of pipelines with proper methane controls.

Barsky said College Republicans are also working to elect Rob Mercuri, who’s running against Democratic candidate Emily Skopov to represent the state House 28th District. He’s taken a pro-life stance, as well as promoted his “crisis leadership” skills he developed during his time at West Point, which he said would help him navigate the pandemic.

Oresanya said the group’s strategy to promote these candidates has changed because of the COVID-19 pandemic. She said members have focused on phone banking from home, literature work — which Oresanya described as “giving people information about potential candidates” — and gathering in small groups to canvas door-to-door.

While the College Republicans are prioritizing campaigning for down-ballot candidates, Oresanya said the group is confident of a Trump victory on Nov. 3.

“We have hope in the integrity of our election system and hope that President Trump will win,” Oresanya said. “As we believe he will.”