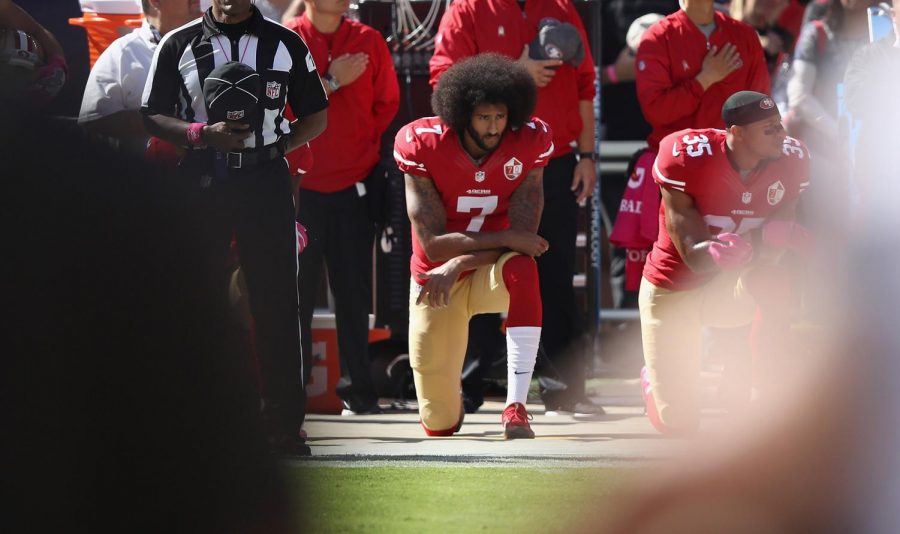 Colin Kaepernick of the San Francisco 49ers kneels for the national anthem at Levi's Stadium in October 2016 in Santa Clara, California.

Social justice issues plagued the United States long before former San Francisco 49ers quarterback Colin Kaepernick sat, and subsequently knelt, during the playing of the national anthem in 2016. He wasn’t the first, nor the last, professional athlete to protest injustice, but Kaepernick became the biggest name to protest the national anthem since Denver Nuggets guard Mahmoud Abdul-Rauf for his religious beliefs in 1996.

Society’s problems have never blended into the sports world the way they have in 2020, though. The COVID-19 pandemic temporarily cut the NBA, MLB and NHL seasons short. As the sports world went on hiatus, the killing of George Floyd under the knee of Minneapolis police officer Derek Chauvin resulted in nationwide protests. By the time sports leagues could return, crowning an NBA champion didn’t appear as significant as everything going on off the court. The reaction across the country led Los Angeles Lakers small forward LeBron James to enter the ESPN Wide World of Sports Complex wearing a black t-shirt with only a white stopwatch on it, displaying the numbers 8:46 — the amount of time Chauvin knelt on Floyd’s neck.

Athletes using their platforms on a massive scale for social justice is relatively new, however, as the NFL didn’t support Kaepernick in 2016 in the way the major leagues have supported the current movements. Let’s take a look at what each league has done to push for equality and justice this year.

While the WNBA remains the most prominent professional sports league to fight social and racial injustice, George Floyd’s killing thrust the NBA back to the forefront of the conversation. But if anyone should lead the charge in men’s sports, it’s the NBA, as they’ve never shied away from activism in the past. The entire league wore “I Can’t Breathe” warmup shirts in December 2014 — 18 years after Abdul-Rauf’s protest — following Eric Garner’s death at the hands of police. The association still had never been as closely involved in social justice issues as they have this season.

The league entered its COVID-19 “bubble” in July, recognizing the importance of using its platform to impact positive change. The courts used in Orlando during the remainder of the season featured the phrase “Black Lives Matter” prominently at center court. The NBA allowed players to display social justice-related messages on the backs of their jerseys during play in the bubble. Although these messages came from a pre-approved list, it brought attention to these issues.

NBA players briefly went on strike during the postseason on Aug. 26, following the shooting death of Jacob Blake in Kenosha, Wisconsin. The league, along with the National Basketball Players Association, established a social justice coalition with the purpose of tackling issues from civic engagement to police and criminal justice reform. This coalition, along with other measures, led the players to finish out the postseason.

Only one MLB player has ever kneeled for the national anthem prior to the 2020 season — former Oakland Athletics’ catcher Bruce Maxwell knelt in September 2017. Maxwell explained that his acts did not signify disrespect to the Constitution or the country, but instead amplified voices of those who had been ignored in the past.

While Maxwell kneeling did not spur similar acts around the leagues in 2017, Floyd’s killing less than three years later led teams across the league to kneel, holding a black rope in unity for all opening weekend games. Teams stenciled the phrase “Black Lives Matter” onto the pitcher’s mound for those opening games as well.

The MLB also allowed players to wear pre-approved social justice messages on their cleats this year, a massive leap forward for a league who normally imposes heavy restrictions on what its players’ footwear looks like.

The MLB pushed three games back due to player protests the same day as the NBA strike began, with seven more postponed the next day. The most moving moment came when the New York Mets and Miami Marlins took the field for 42 seconds — a nod to Jackie Robinson — on Aug. 27, before leaving just a “Black Lives Matter” shirt on home plate and walking off the field.

Another league with little history of social activism prior to 2020, the NHL returned to play in August displaying the message “#WeSkateFor Black Lives” on video screens in the two stadiums used by the league for the remainder of its season in an isolated bubble, and also placed decals with the hashtag on player helmets.

The only league which played on Aug. 26, the day of the NBA strike beginning with the Milwaukee Bucks’ protest of their playoff game against the Orlando Magic, the NHL postponed its games on each of the next two days to stand in solidarity with the other sports leagues.

The NFL has stood at the forefront of sports activism discussions for almost a half-decade now. Kaepernick’s decision to kneel for the anthem in 2016 set off a media firestorm, with many people praising his silent protest and others calling it disrespectful. Not new to these issues, the NFL launched its “Inspire Change” initiative in partnership with the Players Coalition, an organization similar to the Hockey Diversity Alliance, in January 2019. The initiative aims to address education and economic advancement, police and community relations, and criminal justice reform.

Every season-opening game this season began with the playing of “Lift Every Voice and Sing,” often called “The Black National Anthem.” The NFL also took a page out of the NBA’s book, allowing players to wear helmet decals honoring victims of systemic racism and/or police violence. The names come from an approved list, but it is a step forward for another league that is usually stringent on what players can wear.