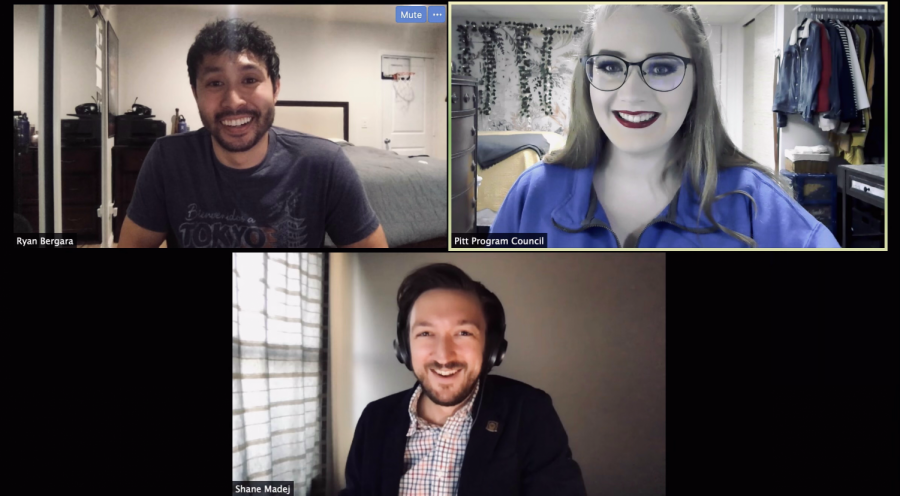 Broadcasting from their respective bedrooms, Shane Madej and Ryan Bergara joked around as they answered questions from eager fans during a Pitt-exclusive remote Halloween event.

Madej and Bergara are the co-hosts of the popular YouTube show “Buzzfeed Unsolved,” a series that has garnered millions of views and landed the pair a streaming deal with Hulu. Pitt Program Council hosted a Q&A with the pair Thursday evening through a Zoom webinar.

The “Buzzfeed Unsolved” show includes several series, including “Buzzfeed Unsolved: True Crime” and “Buzzfeed Unsolved: Supernatural.” In each miniseries, the duo covers a wide range of topics from conspiracy theories to paranormal occurrences. The pair also teamed up with fellow content creator Steven Lim earlier this year to create their own network — Watcher — which focuses on the creation of unscripted digital series.

The Q&A came just in time for Halloween. Quincey Johnston, PPC’s lecture director and the event’s host, said that her committee was intentional on scheduling this event around Oct. 31.

“I had a feeling we would still be doing mostly virtual events at this point in the semester, so I thought it would be cool to celebrate Halloween with some kind of thematic speaker event,” Johnston said. “Ryan and Shane were the first people to come to mind, as I personally follow the show and I’m a big fan of the content they make.”

PPC Public Relations Director Danielle Moss said many of the council’s events this semester might not have been possible without the use of Zoom, especially for guests similar to Bergara and Madej, who live in California.

“A virtual atmosphere is definitely difficult,” Moss said. “While it sucks that we don’t get the face-to-face interaction, we are probably getting interactions we wouldn’t normally get if we were just limited to people who are willing and able to come to Pittsburgh.”

Madej and Bergara’s videos involve the two sharing sassy quips and wheezing laughter. Bergara, a firm supporter and believer of paranormal occurrences, often leads the show. He explains several theories to his Madej, his co-host and a firm non-believer, in an effort to try to find the truth behind each case they discuss.

Even via a remote webinar, the duo often poked fun at each other, and Johnston pointed out that their banter and close-knit chemistry is something many of their viewers enjoy.

“‘Buzzfeed Unsolved’ is a really well-loved show on the Internet, and I know a lot of students really love the show as well,” Johnston said. “It’s got that special brand of humor intrinsically characteristic to a lot of students our age, so I think the dynamic will be different than our typical lecture.”

The pair spoke about how their partnership came to be and how they go about filming and producing their content. Bergara said the inspiration for the show came in part from his own personal fascination with true crime and paranormal activity. He also described how they choose the locations to film their episodes.

“There’s not any rhyme or reason to it — it’s just what we find interesting. I have been a fan of ghost hunting shows since I was a little kid, so I’ve always had kind of a wish list of places I’ve wanted to go to,” Bergara said. “Throughout the show, I’ve slowly but surely worked my way down that list. There isn’t any kind of set rhyme or reason or format to how we decide topics.”

According to Bergara, his co-host has a more relaxed approach to the show.

“It’s very much just what’s interesting to us at that time, and then Shane just shows up to set,” he said.

Madej, who does not believe in the same supernatural theories as Bergara, backed up this sentiment.

“It may come as a shock, but I have long had zero interest in ghost hunting shows,” Madej said. “Ryan and I often bond over our love of horror movies, but I’ve never watched any ‘Ghost Hunters’ or ‘Ghost Adventures.’”

As the evening progressed, one student asked if there were any cases or investigations that left them paranoid afterwards. Madej, a skeptic, revealed that nothing has ever really left him scared or more paranoid afterwards. But Bergara told the audience that after they filmed at the Sallie House — a haunted house in Kansas known for supernatural and sinister occurrences — he had nightmares for two weeks.

“I recall waking up screaming every now and then, and my girlfriend at the time would always just get startled awake by a grown man laying next to her screaming himself awake,” Bergara said. “I would always be confused why I was screaming when I woke up.”

Madej interjected and said, “I can’t believe you guys broke up,” to which Bergara laughed and replied, “It could’ve been the screaming — I can’t imagine why she’d be tired of that.”

The night continued with the two explaining that they love ghost hunting, but it can be tiresome after long days of filming in suboptimal conditions. Many of the supernatural locations they visit are very old and don’t have heating or air conditioning, making filming for several hours quite uncomfortable.

When asked why they chose to create an entire platform centered around true crime and supernatural activity, they listed off a variety of reasons, including curiosity and a love of similar shows on TV.

“I guess I’ve always had a curiosity when it came to true crime,” Bergara said. “There was a part of my brain that thought, ‘Oh I could solve some of these,’ which is obviously very based in reality, so I thought it would be fun to talk about it. For supernatural, that very much came just because I watched so many ghost shows growing up, and I always thought it looked like so much fun to go out there and investigate.”

Even though Madej remains skeptical about ghosts, he said he had an interest in true crime before joining “Buzzfeed Unsolved.”

“I was honestly just sort of roped into [the show],” Madej said. “I was always a big fan of doing deep dives and sort of going down the Wikipedia rabbit holes on cases like that. Even with the early ‘Unsolved’ stuff, I knew a lot of the cases ahead of time because I was already sort of fascinated by them.”

The pair ended the night by giving the audience advice about content creation. Bergara mentioned that sometimes it’s best to just go and bring one’s ideas to life even if there are some mistakes, because that’s how one can learn the best. He said the only way you can learn what works is with practice.

“If there’s an idea you’re not so sure about now, I would say just make it,” Bergara said. “Just pick up a camera and start shooting because that’s how you’ll eventually hone your skills.”