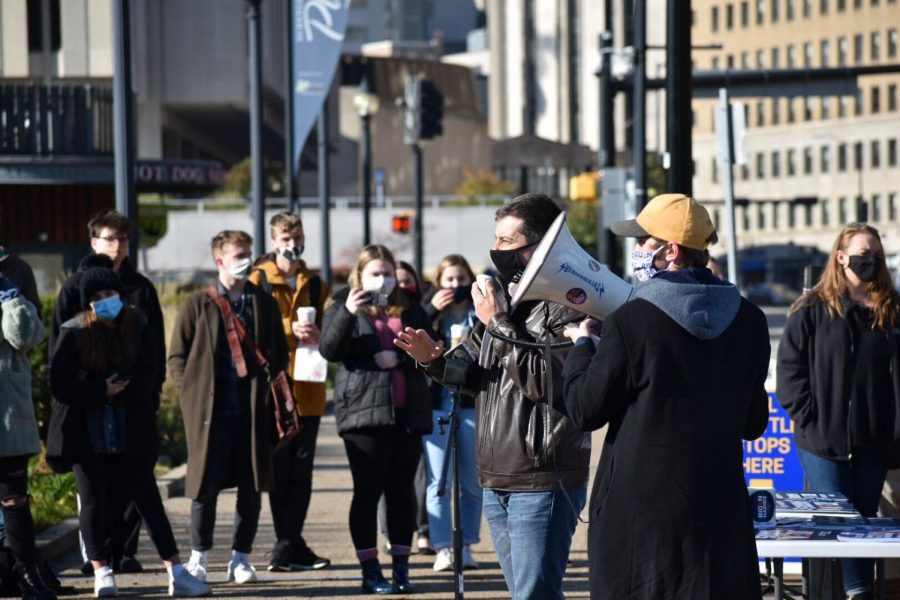 Pete Buttigieg told a crowd of mostly Pitt students on Saturday morning that their votes could determine the fate of Tuesday’s presidential election.

“Let people know if they won’t vote for themselves, if they will not vote for their future, ask them to vote for yours,” Buttigieg said. “You wouldn’t believe the moral authority that a young person has looking into the eyes of a fellow young person, or an older person, and saying this is why it matters to me.”

Buttigieg, former mayor of South Bend, Ind., and candidate in the 2020 Democratic primary, visited Oakland’s Schenley Plaza and delivered remarks to about 50 people, campaigning for Joe Biden and Kamala Harris.

Buttigieg said three days before the election, “all eyes are on Pennsylvania.”

“From Indiana where I live, to Florida where I was yesterday campaigning… people are saying ‘Well what’s going to happen in Pennsylvania?’” Buttigieg said. “People who shouldn’t know the names of individual counties in states they don’t live in are asking about Allegheny County.”

Pennsylvania is one of the most important swing states in the country, with FiveThirtyEight’s presidential race forecast giving President Donald Trump an 84% chance of winning the presidency if he carries the state, and Biden a 96% chance of winning if the state flips blue. With poll averages showing Biden leading Trump by about 5% in Pennsylvania, the race for the state’s electoral votes is likely to be tight.

Buttigieg said this election could be the beginning of the United States’ “deciding decade,” with the COVID-19 pandemic, climate change, the economy and a “moral reckoning” over racial injustice as some of the most important issues.

“We’ve got a public health crisis and the president says it’s going along just fine,” Buttigieg said. “The president of the United States can’t even honor the simple truth that Black lives matter.”

Buttigieg added that Republicans have taken on a strategy of “suppressing” rather than “convincing” voters. He said even if people voted for a different candidate in the primary — including him — “we’re on the same team now.”

The U.S. Supreme Court rejected a Republican-led lawsuit last Monday, allowing mail-in ballots received up to three days after Nov. 3 to be counted. The justices upheld a state Supreme Court ruling that required county election officials to receive and count mail-in ballots that arrive by 5 p.m. on Nov. 6, even if they don’t have a clear postmark, as long as there is no proof a voter mailed their ballot after the polls closed. Three justices hinted that the court may return to the case after the election, which could lead to some ballots being thrown out.

Students in attendance voiced their support for Buttigieg and Biden. Ulyera Brooks said she enjoyed hearing Buttigieg campaign for Biden and Harris. She said Buttigieg was her first-choice candidate for president because of his “progressive” values.

“He’s very progressive,” Brooks, a first-year English literature and political science double major, said. “He’s also younger so I think he can relate more to the millennial and Gen Z kind of generation, and express our values.”

Brooks added that while Biden isn’t as progressive as she would like, he’s a step in the right direction. Brooks referenced Biden’s environmental policy where he calls the Green New Deal a “crucial framework,” but doesn’t fully support the plan introduced by New York Rep. Alexandria Ocasio-Cortez and Sen. Edward Markey, D-Mass.

“One of the big things I was in support of was the Green New Deal, so it was disappointing to find out that he wasn’t in support of that,” Brooks said. “But I think as Alexandria Ocasio-Cortez and Pete Buttigieg come up to support him in this, I think any step we take toward climate change is a good step.”

Carson Hawk, a first-year economics major, said Buttigieg’s speech was an important part of showing support for Democrats in Allegheny County leading up to Election Day.

“He cuts through the crap, he knows what to say, he knows how to energize a crowd,” Hawk said. “It’s important that he talks straight to the people and gets us to a place where we need to be before Election Day.”

Buttigieg also participated Saturday afternoon in a canvass kickoff at the Washington County Voter Activation Center in Washington and in another canvas kickoff in Hampton Township with Rep. Conor Lamb, D-Pa., and Lissa Geiger Shulman, a Democrat who is running against Lori Mizgorski to represent the State House 30th District.

Biden’s campaign announced Friday that it would “barnstorm” Pennsylvania on Monday, and “fan out across all four corners of the state.” No further details about events are currently available.

Hawk said he is voting for Biden because of his economic and environmental policies as well as his “judgment.” He said the next few days leading up to the election are going to be nerve wracking.

“I have faith in Pa., but like I said stakes are high,” Hawk said. “It’s terrifying to think that the future of democracy rests in the next five days.”