Staff Picks: Books to cozy up with 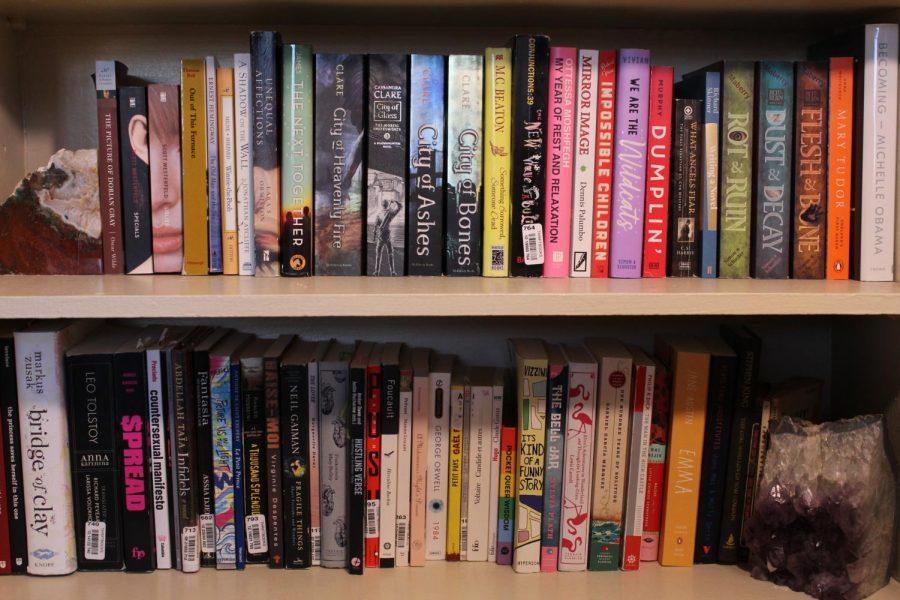 The air is getting colder, the nights are getting longer and Halloween has already passed us by. It’s November, and a particularly melancholic winter looms on the horizon.

But as long as we’re staying in, we might as well get cozy, and there’s no better way to do that than with a good book. If you need to forget about the darkness outside and enjoy a little warmth from the literary world, our staff has the perfect book for you — even if it takes you all winter to read it.

Diana Wynne Jones’ “Howl’s Moving Castle” is a book that somehow fits every season, but is especially good in the fall, when leaves are crunching and everything is cider and spice- flavored. It’s a perverse and clever send up of fantasy wizards and heroines while being sincerely fantastical. Jones subverts fantasy tropes while cuddling up to the best parts of the genre in surprising ways. And while all of her books are joyful, “Howl’s Moving Castle” is exuberant. It is especially disarming to be three quarters of the way into a high fantasy novel and realize that it isn’t high fantasy at all, but cheeky low fantasy wearing a disguise. The book follows Sophie, the eldest of three daughters of a hatter, and her encounters with the Wizard Howl and his monstrous moving house. Sophie has the misfortune of running afoul of a witch, who turns her into an old woman, and everything gets worse — and better — from there. “Howl’s Moving Castle” is fantasy escapism at its funniest, and is best read with a dessert in an armchair or on a cozy couch.

Meet Jane Austen’s runner-up, at least in my opinion — a familiar tale of a woe-stricken family of all girls facing the impending threat of financial dismay, unless they find an affluent, preferably handsome, suitor. Following the death of their father, the three Dashwood sisters and their mother are forced out of their beloved estate, Norland Park, as old English tradition renders the manor property of their half brother John and his petulant wife Fanny. The group relocate to the much smaller Barton Cottage, where the two older sisters, Elinor and Marianne, quickly become acquainted with their evolving circle of potential suitors and spiteful ladies. We share in their hopes of marrying wealthy and see Marianne advance much more quickly than her older sister in this delicate dance of high society. The lovely English countryside serves as the backdrop for “Sense and Sensibility” as we cheer for the young and endearing Dashwood sisters in their search for a stable marriage and pine along with them for their happily-ever-afters.

Maybe it takes a special kind of person to find any Stephen King book cozy, but if you’re of that sort, “Different Seasons” is a fantastic book to read curled up in a blanket next to a raging fire. Never mind the dark night and the howling winds, or the strange amount of ravens circling your very isolated cabin. In truth, “Different Seasons” is a King book that bends more toward drama than horror. It’s actually a collection of four novellas, each corresponding thematically to a season, and the titles may already be familiar to many first-time readers, as three out of the four have been made into Hollywood films. “Rita Hayworth and Shawshank Redemption” corresponds to spring, and inspired the film “The Shawshank Redemption,” which is often in contention for best film of all time. “The Body” was made into the wonderful film “Stand By Me,” and “Apt Pupil” was made into a film of the same name. King is at his absolute best in each one of these stories, creating intricate characters who act and react like real humans, and from a prison break to a murder mystery to a mysterious neighbor, you’ll be enraptured from start to finish.

How about a book written by a Pitt alumnus? “The Last Unicorn” by Peter S. Beagle — who graduated from Pitt in the late 1950s with a degree in creative writing — is an underrated fantastical classic, often overshadowed by the high fantasy epics of Tolkien and George R.R. Martin. “The Last Unicorn” is a standalone novel, freed from the constraints of the typical “series” many have come to expect from the genre. It tells a medieval-esque story from the point of view of a unicorn, who finds herself the last of her kind. The unicorn leaves the safety of her enchanted forest to search for her sisters, only to encounter wicked witches, second-rate magicians and one classic handsome fairytale prince. “The Last Unicorn” has that old “fairytale” feel, something akin to the Narnia series, full of more mysticality and life lessons than the blood and gore of more modern incarnations. For anyone yearning for that childhood “magic” feeling in a book, this is the one to pick up. It’s an easy read that plucks at the sparkling memories of nostalgia in your head, accompanied by some wonderful worldbuilding and a brave, beautiful unicorn.

A Man Called Ove // Sona Sharma, For The Pitt News

While a cranky old man critical of any sort of change that interferes with his life may be the last thing on your mind when you picture the word “cozy,” Fredrik Backman’s “A Man Called Ove” will convince you otherwise — and have you falling in love with a man who hates everything. The novel follows Ove, a retired 59-year-old with a disdain for all things modern, and his wacky exploits as his neighbors drag him along to assist with their problems. Every chapter alternates from Ove’s past to his present, to create an interweaving chain of stories. The narrative reveals how Ove, a man so steadfast in his morals that he hasn’t changed his favorite car brand since his late teens, ends up becoming the thread that ties his community together. You’ll laugh, you’ll cry and, when you finish, you’ll find yourself snuggling into a blanket, desperately rereading your favorite moments to recapture the novel’s magic as you slowly start to catch feelings for a man called Ove.