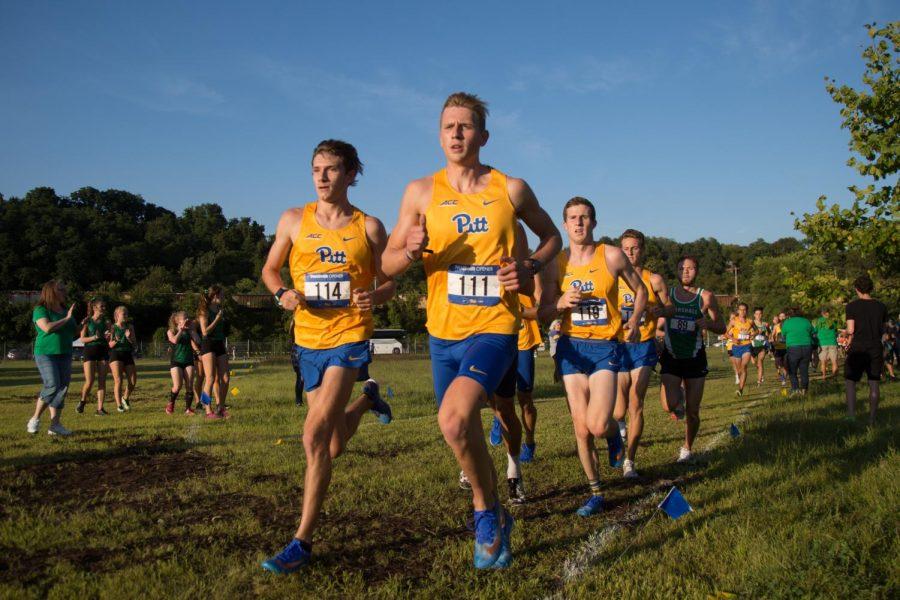 Pitt wrapped up its fall cross country slate on Friday, competing in the ACC Championship meet in Cary, N.C. Photo from a home meet in September 2019.

Pitt wrapped up its fall cross country slate on Friday, competing in the ACC Championship meet in Cary, N.C. The men’s team finished in 10th place out of 15 teams, with 282 points, while the women took 14th with 406.

Senior Zach Lefever led the men’s team, completing his 8k in 24:10.2 for 39th place. Lefever had not finished first amongst his teammates at either of the Panthers’ two previous meets this season, but he was the top Panther performer at last year’s ACC championship as well.

On the women’s side, senior Ally Brunton led the Panthers with a 21:32.2 6k for 54th place. Brunton finished first for the Panthers in Pitt’s two previous meets as well.

Neither Pitt roster had anyone earn All-ACC honors, awarded to the top 21 finishers of both races.

“I know for myself, individually, I wanted to be All-ACC this year,” Lefever said. “I fell a little bit short of that, but that was my goal this year.”

Although Lefever wanted a higher finish, he improved his time from last year’s ACC championship by over a minute. Despite his quicker time, he finished one spot worse in the standings this year. He said the muddy conditions from the 2019 race likely resulted in the slower teams, but also praised the competition he faced on Friday.

“The ACC is one of the best distance running conferences in the country,” Lefever said. “This year, it was definitely a lot faster than last year. It just kinda shows the talent that’s surrounding you all the time.”

Brunton said this course favored the runners much more than the other venues the Panthers had competed at this season.

“Throughout the season, we were at our home course which is pretty hilly and then at the Navy course which was very hilly,” Brunton said. “This course still had a few hills, but not nearly as tough as the other courses we ran on this season. It was definitely nice to run on a much better course.”

Both Brunton and Lefever expressed excitement in the future of the cross country program after their departures, with first-years Luke Henseler and Sadie Carey finishing second on the men’s and women’s squads respectively.

“I remember when I came in four years ago how much I struggled to adjust to college life and college running and college competition,” Lefever said. “To see [Henseler] running at this type of caliber this early is super impressive. It’s been fun getting to train with him and teach him what I’ve learned over the four years, and watch him mold into this already.”

Friday’s race concluded Pitt’s fall cross country season, so the runners will now prepare for the indoor track season. With fall sports championships moved to the spring, Pitt head coach Brad Herbster said he wasn’t sure if the Panthers would participate in a spring cross country season of any kind.

“I think a lot of it’s [going to have to do with the indoor and outdoor track seasons],” Herbster said. “That’s always tough because you don’t want to jeopardize a great outdoor season for having another cross season, but at the same time you want to give your team a really good chance to have success.”

Though disappointed by the team’s final spot in the ACC standings, Brunton said she has high hopes for the team’s indoor track season. She already has spotted some areas of improvement to focus on in the next few weeks.

“The first half of my race at ACC’s was pretty good, like I went out, but then I sort of fell off and let a few people pass me,” Brunton said. “So I think that’s something that I need to work on, and I think some other girls on the team can relate to that too. Just being tough throughout the whole race I think was a big lesson we learned.”