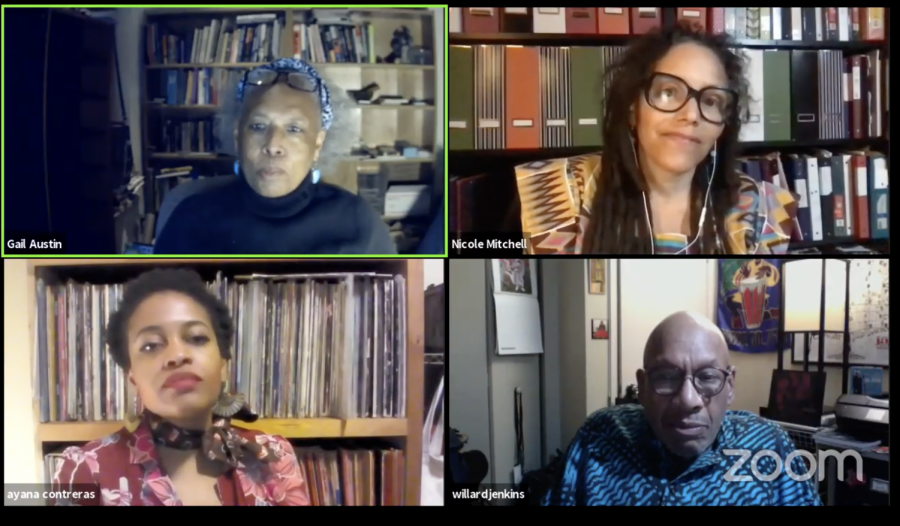 The second episode of “Jazz Talk,” a video series by Nicole Mitchell Gantt, was livestreamed on the Pitt music department’s YouTube channel Wednesday night as part of the 50th Pitt Jazz Seminar.

Nicole Mitchell Gantt started the video series “Jazz Talk” in late April, after in-person concerts halted due to the COVID-19 pandemic. She said she hoped that by broadcasting conversations with musicians, she could continue to connect people to Pittsburgh’s jazz scene.

“It was a way to engage audiences and celebrate Pittsburgh jazz in the midst of the pandemic,” Gantt, Pitt’s William S. Dietrich II Endowed Chair in Jazz Studies, said. “I thought that creating a platform for talking about the music could be something long-standing.”

The night began with a pre-recorded video from Tony Fountain, a former jazz percussionist and founding member of Black Action Society, who explained the overlap between civil rights and jazz studies at Pitt. BAS conducted its historic sit-in at the Cathedral of Learning in 1969, and Davis founded the jazz studies program later that year. According to Gantt, the program emerged in context with racial justice movements across the country and in Pittsburgh.

“I think that it’s overlooked now, especially the younger students,” Gantt said. “The fact that they had the opportunity to learn jazz came from a lot of work that Black students and faculty did to make that happen all across the nation, and I think that context can get lost.”

The civil rights movement of the late ’60s also offered a new opportunity for musicians who, according to Austin, faced exploitation from their record companies. Austin, who was involved in the Black Power movement, described the production of Black jazz music as an “act of self-determination.”

“You had jazz musicians that were taking it upon themselves to engage in, musically, acts of resistance,” she said. “[Musicians were] demanding that our music be considered in this way — not coming out of the ideas and exploitation of people who were not of African descent.”

Black musicians — from Davis and Allen to Duke Ellington and Billie Holiday — have made major contributions to jazz. But a 2010 study from the Jazz Audiences Initiative found that across 19 U.S. cities, 80% of audiences at jazz concerts were white. On a personal level, Austin said she’s seen fewer Black people coming to jazz concerts at Kente Arts since she first opened the venue 13 years ago.

“The audiences are becoming less and less dark, until sometimes, I’m just wondering, ‘Where are our folks?’” Austin said. “They’re not coming to concerts. And that’s not just Pittsburgh.”

While Austin said she saw dwindling Black patronage as the result of changing tastes and the lack of jazz on mainstream radio stations, Jenkins said Black people still enjoy jazz but often don’t have access to live concerts.

“We’ve seen that in large urban areas with a significant Black populous, if you present a free jazz performance, you will get Black audience,” Jenkins said. “A lot of cities where the so-called jazz venues or clubs are located are not places that are either frequented by Black audiences or seen as friendly to Black participation.”

While “Jazz Talk” and this week’s seminar focus on a single genre, the panelists also discussed efforts to rethink “jazz” as a label and instead consider Black music more broadly. Contreras emphasized the need to move away from rigid genre labels in order to reclaim Black music for Black people.

“I think the feeling was that [jazz has] been hijacked by people who are fans of music, but don’t necessarily have this stake in its success,” Contreras said. “I think a lot about musicians from Chicago … that don’t talk about being jazz musicians or blues musicians or even soul musicians. They talk about ‘the music.’”

The panelists also addressed unequal access to jazz education, including the lack of arts funding for low-income schools and the underrepresentation of Black music in universities. Austin, who worked with programs for Black students during her time as an administrator at Pitt, said universities need to focus on direct outreach to local high schools.

“I think too much we talk about what’s lacking,” Austin said. “You have to go out and beat the bushes and identify somebody. ‘This is a Black girl, this is a Black boy. I’m gonna talk to you and I want you to come to my jazz program.’”

According to Gantt, this episode’s theme of equity in jazz holds weight in the midst of the current Black Lives Matter movement. She said the music industry needs to consider the legacy of systemic racism, especially in genres that have seen significant contribution from Black people.