Protesters gather outside the City-County Building to protect votes 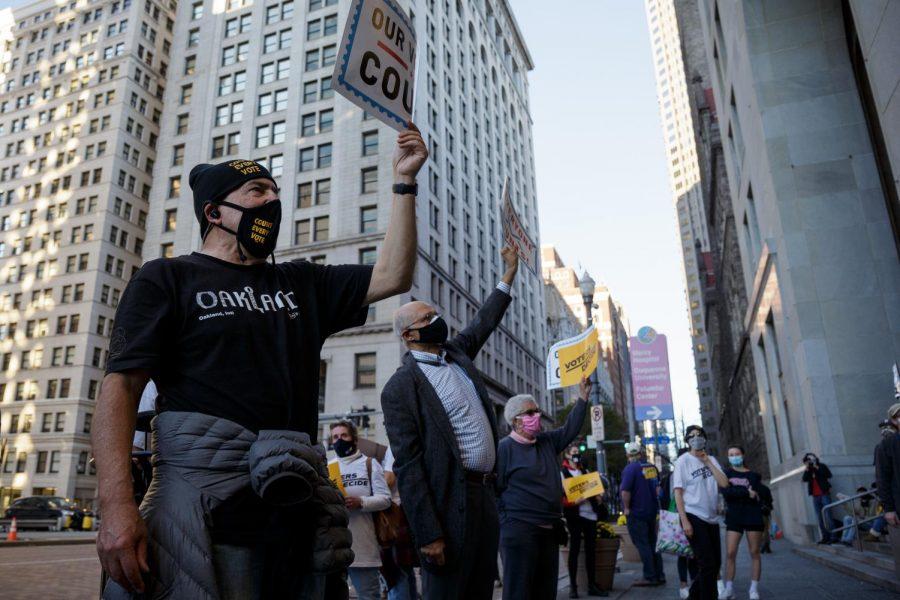 Demonstrators gather on the sidewalk outside of the City-County Building entrance calling for every vote to be counted in the 2020 election on Wednesday afternoon.

About 100 protestors chanted “When we vote, we win!” Downtown on Wednesday afternoon, as passing cars honked their horns in support.

One of the demonstrators was Lisa Frank, a member of the Service Employees International Union. Frank was adamant that every vote must be counted in this year’s election.

“We need to have a system of voting that the people can trust,” Frank said. “We have to insist that every vote counts.”

This “Count Every Vote” demonstration was one of two rallies held in front of the City-County Building Wednesday afternoon. Pittsburgh United hosted the “Count Every Vote” demonstration at 4:00 p.m. The group works toward creating a community in Pittsburgh that serves the people and their families and shares the prosperity generated by economic growth, according to its website. Pittsburgh United held the rally along with partner organizations SEIU and Bend the Arc. 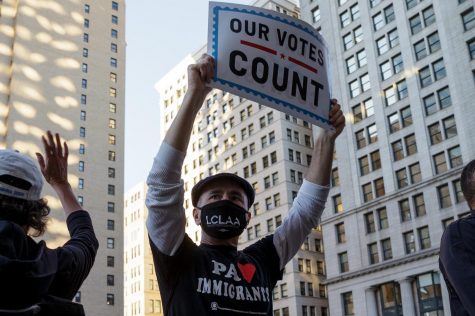 The second rally, “Don’t Let Trump Steal the Election”, was held separately in the same location at 5:30 p.m. Socialist Alternative Pittsburgh and nine other leftist groups, such as the CMU Labor coalition, College Students for Bernie and the Green Party of Allegheny County, hosted the event.

While there were two separate rallies, their goals were similar — to ensure that the presidential vote isn’t called before all ballots are counted. President Donald Trump has repeatedly questioned the legitimacy of mail-in ballots during an election that has seen a record amount of mail-in votes due to the COVID-19 pandemic.

Alice Liebowitz, a 50-year-old Duquesne resident, said she showed up to the demonstration because she is “extremely worried” the Trump administration will try to find a way to stop the vote count.

“Donald Trump and the Supreme Court have both signaled that they both intend to not let all the votes be counted,” Liebowitz said. “We need to be a democracy, and as a democracy we need to have our elections decided by the votes that are cast.” 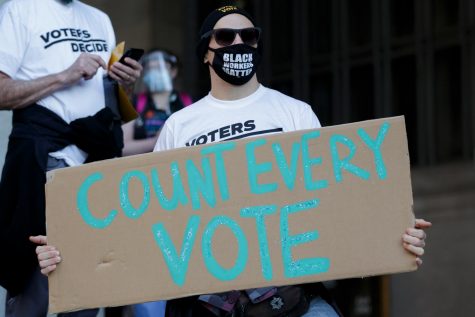 Former Vice President Joe Biden currently has 264 electoral votes compared to Trump’s 214, according to the Associated Press. The race will come down to a few key swing states such as Pennsylvania and Nevada, which are still tallying votes as of Thursday evening.

Artinese Malachi, an executive board member of SEIU Healthcare Pennsylvania, said the SEIU and other groups were demonstrating to make sure whatever the outcome of the election, every vote is counted. 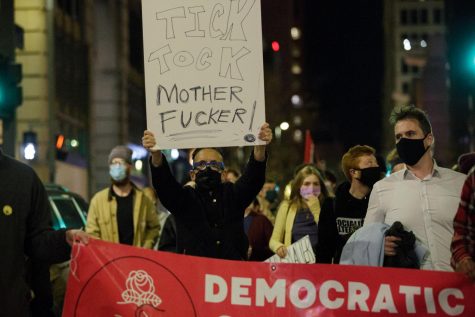 Malachi, who’s a nurse, said essential workers who have been kept busy by the COVID-19 pandemic represent a significant portion of potentially disenfranchised voters if the vote is called early.

“As a nurse, a lot of times we work 12-hour shifts, so getting to a poll on Election Day isn’t always an option,” Malachi said. “So when voting by mail became an option, most of us jumped on it. It’s our right, and it should be acknowledged.”

After the “Count Every Vote” rally ended, many of the organizers and participants — sporting matching yellow and black signs and shirts reading “voters decide” — dispersed, just as the protestors for Socialist Alternative’s “Don’t let Trump Steal the Election” arrived. This larger crowd of about 130 people spread out from the sidewalk in front of the City-County Building to Grant Street.

The later demonstration had slightly different messaging from the first. Chants like, “Count every vote!” were replaced by, “One, two, three, four, poverty is class war!” The Socialist Alternative demonstration hosted speakers in front of the City-County Building before protestors marched down Grant Street. The march moved toward Sixth Avenue as bike marshals blocked part of Grant Street. 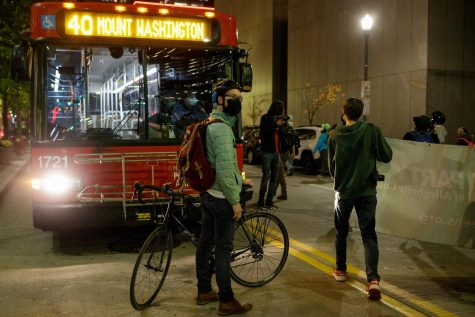 Margot Stewart, an organizer for Socialist Alternative, said the group doesn’t want to wait until Trump steals the election to take action.

“Biden has said we need to wait and see, but we think the only thing that happens if we wait is that Trump steals the election, so we need to be relying on ourselves to fight back,” Stewart said.

After arriving back at the City-County Building, a smaller, unidentified group broke off from the demonstration and continued marching while carrying road flares and pulling down road work signs and trash cans as they walked, according to 90.5 WESA. The group walked through the Hill District near PPG Paints Arena before returning to the City-County Building Downtown.

Once back on Grant Street, the group of about 40 people dispersed along with bike marshals as dozens of police officers approached. Three people were arrested Downtown for charges of criminal mischief and propulsion of objects onto a roadway.

Despite the differences in the two demonstrations, both held the same core message. Malachi said the demonstrations had one central goal — protecting the right to vote.