‘A road to recovery’: Pitt students reflect on Biden victory 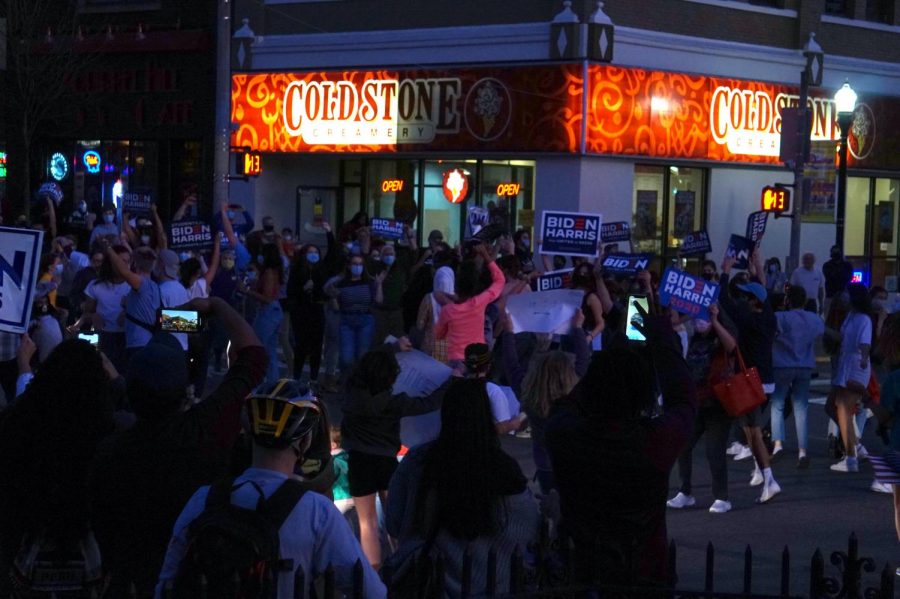 Pittsburghers celebrate Joe Biden's victory at the intersection of Forbes and Murray avenues in Squirrel Hill.

Meera Tikku and Shruthi Sethuraman found out the results of the presidential election in true 2020 fashion — while scrolling through TikTok.

“Someone had sent a message that they had announced him as the winner and I was like, ‘Yo, I think Biden won!’” Tikku, a senior communications major, said.

Across Pittsburgh and the nation, many people celebrated in the streets and honked their car horns after The Associated Press called the presidential race for former Vice President Joe Biden on Saturday morning. Pittsburghers danced and marched in the streets in the City’s South Side neighborhood mid-day Saturday after the election was called.

Madison Myers, a graduate student in the School of Public Health, said she was “overwhelmingly happy” when she found out Biden won, but added that things still need to change in America.

“I mean, a lot of people’s lives were hanging in the balance there,” Myers said. “It’s good that Biden got elected and that’s all settled, but I feel like there’s still a lot of issues our country is facing, and one candidate isn’t going to fix that. So we still need to be active and show up.”

The Biden-Harris campaign made history in more ways than one. Biden received the most votes ever cast for a presidential candidate, and Kamala Harris will be the first woman — and woman of color — to serve as vice president. Tikku said it’s extremely inspiring to see a South Asian and Black woman in such a powerful position.

“It’s pretty motivating that we can make a space for ourselves,” Tikku said. “It kind of feels like we can put a band-aid on and start healing as a country. We can somewhat start on a road to recovery. I know it might take longer than that, but at least we can start somewhere.”

Sethuraman, a senior information science major, said she was proud that Pennsylvania’s 20 electoral votes ended up going to Biden.

“Pennsylvania turning blue for Biden is such a huge deal, so we were both crazy happy,” Sethuraman said. “[Tikku and I are] both Indian-Americans. Representation in politics is so, so important. So it was such a big deal and we couldn’t believe it.”

Myers said she hopes the next four years will help bring Americans back together.

“I hope that Joe Biden can unify people, because the Trump administration was so divisive,” Myers said. “I’m hoping some of those wounds can heal and there’s progress toward big social issues in our country, like systemic racism. I also have a feeling electoral politics as a whole are going to change over the course of our generation’s lives.”

Tikku said as a first-generation American, she’s excited to be proud of America again.

“I think being a first-generation American, it’s so sad that we’ve become the ‘butt of the joke’ of other countries,” Tikku said. “I just hope that we’re still looked at as [where] people can find equality, follow their dreams and passions. I feel like [Trump] kind of perpetuated this idea that there can be no middle ground between people. I hope we can focus on progressing as a country and making life better for everyone as a whole.

Tikku added that Biden may not have been everyone’s first choice for president, but she’s hopeful he’ll have a successful presidency.

“A lot of people are in the boat that he’s the lesser of two evils, and I’ve seen a lot of people say that the change starts with the people, at least we have someone who’s gonna listen to people,” Tikku said. “I hope people can move toward progress.”

Sethuraman said people need to continue to work for change and progress in America over the course of the next four years.

“It’s definitely a huge step forward, but there’s obviously so much work to do and so much change we need to see,” Sethuraman said. “I think these past four years, our country has seen the divide. I really hope that we can all start treating each other with respect, even if we have different opinions.”